[Editor’s Note: The Bureau of Ocean Energy Management (BOEM) spins like a wind turbine as it pretends not to know giant wind arrays are bad for the ocean and right whales.]

But Virginia’s Phase 1 array is a whopping 2,600 MW, with huge 15 MW turbines. Clearly, it is a giant, far bigger than anything that has ever been built. The cost is estimated as $10 billion to build.

Moreover there are a dozen or more comparable giant wind arrays proposed to be built at the same time, lining the Atlantic coast. Last I heard, the combined proposals topped a gigantic 40,000 MW.

From an engineering point of view this is nuts. No one has ever done anything like this so let’s do a hundred billion dollars worth and see how it goes, right? Work up to it? Start small then scale up, learning as we go? None of that.

Virginia’s developer, Dominion Energy, is especially nuts. Most projects have retained experienced European OSW builders as prime contractors. Ørsted for example is the prime for a bunch of projects. Dominion says they themselves will be the prime, with no experience at all. Oh wait, they did build two 6 MW test turbines. So practically no experience, not absolutely none.

From an environmental impact standpoint these giant arrays are far worse. Since nothing like this has ever been built there is no data on their potential impact. It could be extreme, including exterminating the severely endangered North Atlantic Right Whale, but who knows?

The Federal Bureau of Ocean Energy Management (BOEM) had taken this ignorance to absurd heights. They are doing the Environmental Impact Assessment (EIA) for each proposed project. This despite the obvious conflict of interest given their mission is to get these giants built.

Their insane argument is that since we have no impact data there is no reason not to build the damn things. Ignorance is bliss, policy-wise.

I am not making this up. Here is their explicit finding, from the EIA for Empire Wind phase 1, a true giant:

“There is a lack of research regarding the responses of large whale species to extensive networks of new structures due to the novelty of this type of development on the Atlantic OCS.  BOEM determined that the overall costs of obtaining the missing information for or addressing these uncertainties are exorbitant, or the means to obtain it are not known.”

In plain English “We know nothing and can’t find out.” Here, then, is their nutty conclusion:

“Therefore, BOEM does not believe that there is incomplete or unavailable information on marine mammal resources that is essential to a reasoned choice among alternatives.”

The information is not incomplete or unavailable because there isn’t any!

This is just self serving gibberish. There is more than enough information about smaller arrays to see what the likely destructive threats are from the giants. Plus, this is another compelling reason to start small and grow, carefully observing the adverse impacts, stopping if necessary.

For example, simple extrapolation from smaller turbines indicates that the underwater noise from these giant arrays is likely to be tremendous. This could have very serious impacts on Right Whales and other critters that communicate acoustically. We have more than enough information to analyze this noise threat.

This nasty environmental issue is discussed at some length in these comments to BOEM, on their draft OSW versus Whales Strategy.

Summary: Rushing to build a big bunch of incredibly expensive giant wind arrays that are far bigger than anything built in the world to date is bad engineering and worse environmental policy.

These are silly giants. BOEM must be stopped. 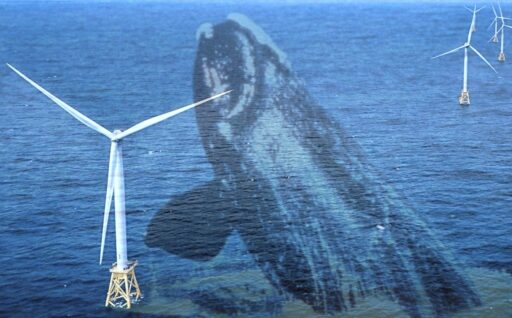