Glen Riddle Station Case No Riddle at All for PUC

Glen Riddle Station Case No Riddle at All for PUC

[Editor’s Note: A noise fine issued to Mariner East has been reversed by the PUC for good reasons but note the pipeline before the Glen Riddle Station residents who complained.]

In March, MDN told you that the Deputy Chief Administrative Law Judge of the Pennsylvania Public Utility Commission (PUC) issued a ruling against the now completed Mariner East 2 pipeline project, assessing a $51,000 fine on the project for work done near an apartment complex (see PA PUC Judge Fines Mariner East Pipe $51K for Work Near Apt Bldg). In June, the full PUC voted to accept and enforce the $51,000 fine recommended by the PUC judge (see PA PUC Upholds ME Pipe Fine of $51K for Work Near Apartment Bldg). And now, two months later, the PUC has voted to reverse its own decision, lowering the fine from $51,000 to $3,000. Why? What changed?


What changed is that two PUC commissioners reversed their earlier votes after receiving a letter from the Energy Association of Pennsylvania (EAP), a trade group representing the state’s big electric and gas utilities. The letter said the PUC had established a dangerous new precedent/standard for noise and emergency responder access during *any* utility construction project–not just Mariner East.

The fine levied on the now-completed Mariner East (ME) NGL pipeline project was levied for being too loud and not doing enough to communicate with residents of an apartment complex near where the pipeline was doing construction work in Delaware County. EAP said the same standard used on ME would now be applied everywhere, to all utility project work, throughout the commonwealth–threatening to shut down pretty much all utility work–just to punish one project in one location.

Energy Transfer (and subsidiary Sunoco Logistics), the builder/owner of the ME pipelines, was installing pipe “through the middle of” the Glen Riddle apartment complex. Of course, the construction was disruptive to those who live there. The owner of the complex made all sorts of complaints and tried to block the project (see Apt. Complex Owner Hopes to Find Dirt in “Secret” ME Pipe Letters).

Why build a pipeline (series of pipelines) through the middle of an apartment complex? Because that’s where ET owns a right-of-way. The builders of the Glen Riddle complex built the apartments on top of a pipeline easement they knew was there. It is not Energy Transfer’s fault that the pipes have to run through that complex.

ME is actually three pipelines–an original pipeline that was built in the 1930s to flow gasoline (ME1) along with two others, ME2 and ME2X. All three currently flow natural gas liquids (NGLs), including ethane and propane. For most of their distance, including through Delaware County where the apartment complex is located, all three pipelines use the same right-of-way.

The easement along the route of the original ME gasoline pipeline allowed the owner (Sunoco) to install more pipelines in the same easement. Glen Riddle Station Apartments was built in 1971, some 40 years *after* the original ME was in the ground flowing gasoline. The apartment complex builder/owner knew more pipelines might one day get built in the easement (right-of-way), but the owner built an apartment complex there anyway. The current manager/owner, whose grandfather built the apartment complex in 1971, was upset with ET/Sunoco for showing up and beginning the work he’s known for years might someday happen. Too bad, so sad.

Here’s the letter that changed two of three PUC commissioners’ votes from a $51,000 fine to a $3,000 fine and here’s a story from the Philadelphia Inquirer that completely misses the main point but reveals some other important information:

State regulators have reduced a $51,000 penalty imposed in June on Sunoco Pipeline LP for violations during construction of its contentious Mariner East pipeline system through a Delaware County apartment complex. The pipeline company now faces only $3,000 in fines.

The Pennsylvania Public Utility Commission voted 2-1 on Thursday to walk back its imposition of a $51,000 fine for violations related to disruptions during construction through the 124-unit Glen Riddle Station Apartments in Middletown Township. The PUC reversed its earlier decision that Sunoco’s actions violated state utility code by creating unreasonably high noise levels and exacerbating emergency and fire hazards.

Two members of the commission, Ralph V. Yanora and John F. Coleman Jr., reversed their earlier vote after citing a letter from the Energy Association of Pennsylvania, the trade group for the state’s big electric and gas utilities. The Energy Association said the PUC’s June decision could create a new statewide standard for noise and emergency responder access during any utility construction project.

A spokesperson for Glen Riddle Station Apartments, which has been engaged in a long-running dispute with Sunoco over its expansion of its pipeline system under its property, said the decision was “extremely troubling.”

“We have no idea why the PUC would suddenly reverse this comprehensive ruling,” David LaTorre, a spokesperson for Glen Riddle Station L.P., said in an email on Friday.

The dispute is one of many that the Mariner East project generated during construction of its 350-mile path across Pennsylvania. The project, which transports shale gas liquids such as propane and ethane to an export terminal southwest of Philadelphia, drew $24 million in fines from Pennsylvania regulators and was particularly disruptive where it threaded its way through densely populated areas near Philadelphia. Work was completed on the pipelines earlier this year.

The PUC voted 3-0 in June to adopt an administrative law judge’s recommendation that cited Sunoco for creating a fire hazard during construction at Glen Riddle, making excessive noise, and failing to adequately communicate with apartment residents. After Thursday’s reversal, the decision only retains the violations for inadequate communications, which carry a $3,000 fine. 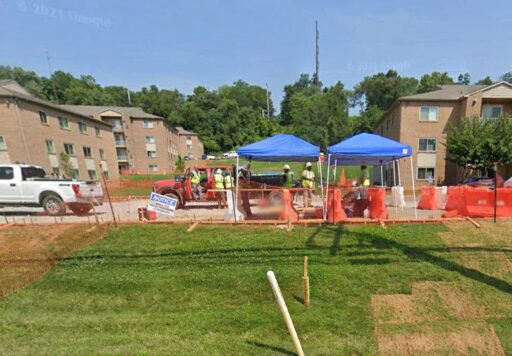 Sunoco had asked the PUC to reconsider the June decision. But it was a supporting argument from the Energy Association, which was not a party to the dispute, that appeared to carry the most weight. The Energy Association’s lawyer, Devin T. Ryan of the law firm Post & Schell, said the PUC’s findings that the noise levels from Sunoco’s construction crews exceeded 75 decibels on 23 occasions might create an impossible standard for any utility to meet.

“As a practical matter, electric and natural gas utilities, and their contractors, often work in residential areas and necessarily use equipment that exceeds 75 decibels, such as jackhammers that have noise emissions of approximately 130 decibels,” wrote Ryan. He said the noise was necessary for utilities to provide adequate service, as required by law.

“Utilities cannot adequately perform their duties and undertake construction projects on critical infrastructure in residential areas if every single noise in excess of 75 decibels will result in a [violation],” Ryan wrote.

The two commissioners also said it’s not uncommon for utilities to use large equipment on construction sites that may impede emergency responders.

Gladys Brown Dutrieuille the PUC’s chair, said in a dissent that the PUC’s June decision did not create a new statewide standard, and Sunoco raised no novel arguments in asking the commission to reconsider its decision.

“My vote was in no way intended to impose a broad and overreaching set of construction standards upon our regulated utilities,” she said.

The apartment complex is waging a separate legal battle seeking communications between Middletown municipal officials and Sunoco Pipeline to shed light on what it says is a cozy relationship between the township and the energy company. Sunoco Pipeline is a subsidiary of Energy Transfer LP, of Dallas, Tex.

Sunoco attempted to horizontally bore a 3,500-foot underground pathway for two new pipelines under the apartment complex. But leaks of drilling fluid during construction spilled into streams, and groundwater gushed out of the bored hole. Sunoco abandoned the effort, and switched its construction methods to a conventional open trench.

The new construction method was particularly disruptive to Glen Riddle Station, which was bisected for eight months by a massive trench and 30-foot high sound walls that were as close as five feet from some buildings.

Editor’s Note: Jim gets it correct, of course. The main point is that the apartments were built on the pipeline, not the other way around. The noise observations of the PUC are also interesting to me as a planner because noise standards are notoriously difficult to impose. Occasional noises occur for all sorts of reasons that are simply impossible to regulate out of happening. The PUC, therefore, did the only it could, which was to apply common sense and avoid creating a future regulatory quagmire. The incident also serves to remind us pipelines are never really an obstacle to development once they’re built, similar to numerous other objects of NIMBY resistance.