Global Warming Cause Gains Nothing from Scare Tactics

Robert Bradley, Jr.
Founder and CEO of the Institute for Energy Research

The global warming cause is being destroyed by the irresponsible use of political scare tactics in the hands of the immature and greedy who can’t face facts.

Wise alecks on social media noted with amusement how Beto O’Rourke recently claimed humans had only ten years to act on climate change, thus one-upping Alexandria Ocasio-Cortez who had previously gone out on a limb by putting the deadline at twelve years. Snark aside, it’s important to point out that the “consensus science” as codified, for example, in the periodic reports from the United Nations do not support such a cliff-hanger mentality at all.

Our Political Figures Ignore the IPCC

The quickest way to make this point is to reproduce something I highlighted several years ago in an IER post where I caught Paul Krugman just making up stuff about climate change. Specifically, the following table comes from the latest Intergovernmental Panel on Climate Change (IPCC) report, the AR5 (Table SPM.2):

To make it easier to read, I’ll excerpt the relevant left and right portions of the table below: 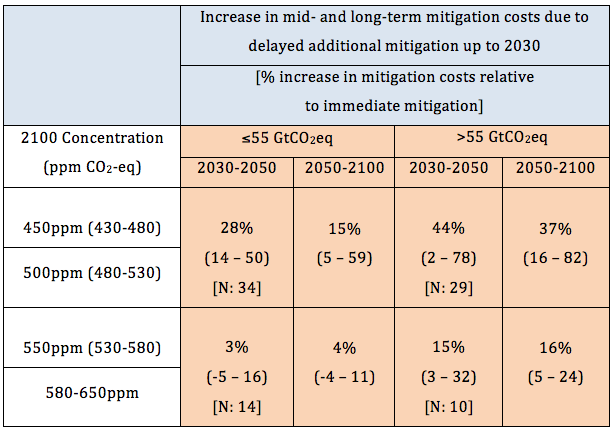 There’s a lot of information in the table, but let me summarize the important elements vis-à-vis the recent claims from O’Rourke and Ocasio-Cortez. The beige cells in the adapted table above show the percentage increases in the total (undiscounted) mitigation costs necessary to achieve the far-left (white cells) atmospheric concentrations of greenhouse gases in the year 2100,. They do so for the years 2030-2050 and also for 2050-2100, for two different scenarios of total emissions (either below 55 gigatons of CO2-equivalent, or above).

In other words, the beige cells show us how much a delay of government action through the year 2030 will increase the cost necessary to achieve the specified atmospheric concentrations for the year 2100 (white cells). Specifically, the beige cells show that by “doing nothing” about climate change until the year 2030, even in a high-emission baseline scenario, the IPCC’s best guess of the cost of achieving the aggressive outcome rises by 44 percent in the years 2030-2050 and 37 percent in the years 2050-2100.

Now to be sure, the rhetorical point of the above table in the AR5 was to encourage support for climate mitigation policies. The people who put together this table for policymakers wanted to show, “Hey, since we’re obviously going to have to deal with climate change eventually, we might as well get going, because the longer we delay, the more expensive it will be.”

My modest point here, however, is to show that this table now poses an awkward stumbling block for those—like O’Rourke and Ocasio-Cortez—trying to scare people into supporting ludicrously expensive and aggressive proposals to “fight climate change.” If O’Rourke and Ocasio-Cortez were anywhere close to being correct when issuing their ever-shrinking windows for action, then in the IPCC table above, the beige cells should have all had infinity signs. Moreover, a footnote would explain: “If we wait until 2030 to begin mitigation efforts, we will all die.”

But that’s not what the UN report told us. Instead, it reported that yes, the costs of achieving various climate targets (as measured by atmospheric concentrations of CO2 in the year 2100) would be higher due to delay, but even in a pessimistic scenario, the best-guess of the cost increase was 44 percent.

In this post, I highlighted one particular table from the most recent UN report on the science of climate change in order to show just how baseless are the recent claims that humans have x years to act on climate change. Over at Reason, Ronald Bailey marshals more evidence—again, from the very “consensus science” documents we are supposed to rely on—to show that these claims are nonsense.

This whole episode is yet another example demonstrating the farce of the climate change policy debate. Whenever a critic disagrees with the most radical proposals that would—according to their own proponents—transform Western society, the critic is berated as a science denier. And, yet, even a cursory examination of the actual technical reports shows that the prophets of doom are the ones who are spouting forth unsupported claims.

Editor’s Note: I couldn’t agree more with Robert Bradley’s modest point. It is, in fact, not so modest at all. It is the heart of the matter because natural gas substitutions for coal have resulted in the only meaningful reduction in CO2 emissions that we are told by the IPCC are the root cause of global warming. By that entity’s own standards, we’ve made enormous progress, all due to a shale revolution delivered by technology.

That same technology is now delivering progress on other fronts as well with CO2 capture, with huge methane emissions reductions, with “electric frac” jobs and much more. This is where the tangible progress is being made on global warming. The scare tactics of these irresponsible, immature and uber-ambitious spoiled children politicians have accomplished nothing and never will. They only strep by step erase whatever credibility their global warming cause currently enjoys.