Global Warming Gestapo Tries Taking the “Natural” Out of Gas

Global Warming Gestapo Tries Taking the “Natural” Out of Gas

Despots and dictators the world over are the same, whether it’s Vladimir Putin relabeling his naked aggression of outright war against Ukraine a “military operation,” or New York State’s so-called Climate Action Council relabeling natural gas as “fossil gas.” Tyrants seek to relabel those things they can’t control in an attempt to pressure, hoodwink, and manipulate the masses–to force others into doing what they (the tyrants) want done. The Communists who run NY state can’t convince the population to self-immolate by giving up the use of natural gas, so they’re changing the language, hoping to convince more people to go along with their harebrained plan to dump the use of all “fossil fuels.” The left’s plan is energy suicide and a majority of New Yorkers instinctively know it. 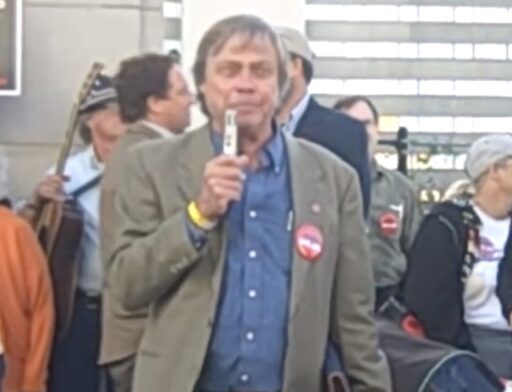 Fractivist Bob Howarth at an anti-fracking rally, wearing anti-fracking button and appearing with the likes of the Rockefeller family’s Catskill Mountainkeeper as part of its long-running campaign against natural gas that would have raised the value of land the elites wanted for themselves.

We’re going to do some of our own relabeling. The Climate Action Council is now called the Global Warming Gestapo, at least here on MDN.

On July 18, 2019, New York Gov. Andrew Cuomo (a corrupt, sexual predator) signed into law the Climate Leadership and Community Protection Act (see New York Pulls the Trigger, Commits Energy Suicide with New Law). It is among the craziest and stupidest climate laws in the world, requiring NY to reduce so-called greenhouse gas emissions by 40% by 2030 and by 85% by 2050 (from 1990 levels).

Under the guise of protecting and promoting the health of NY citizens, and saving the planet at the same time (i.e. global warming), the Global Warming Gestapo took up the issue of heating with wood stoves last December. The Gestapo is considering a regulation that forces heating systems sold in the state, beginning in 2035, to be heat pumps (electric heat). All other options will be removed, including wood stoves (see New York Plans to Outlaw Heating with Wood, Cites Global Warming).

The Gestapo is on the move again. This time they are trying to control the minds of NY residents by forcibly changing the terminology used to refer to natural gas. One of the people behind the change (one of the 22 members of the Global Warming Gestapo) is none other than discredited Cornell professor Robert Howarth—the man who claims burning coal is better for the environment than burning NATURAL gas. Read his shallow explanation below:

Everyone knows what natural gas is. It’s the stuff we use to heat our homes and fuel power plants across the state.

But now, with the stroke of a pen and a vote, the 22-member group charged with designing New York’s road map to a carbon-free economy has changed the name of natural gas to “fossil gas.”

The new name emerged back in December when members of the state’s appointed Climate Action Council agreed to use the term in their draft scoping plan which is a road map to clean energy in the coming years. The plan lays out preliminary strategies and policies for making large-scale reductions in CO2 emissions by 2050, as outlined in a 2019 law, the Climate Leadership and Community Protection Act.

The draft plan refers to fossil gas in a number of contexts.

“The vast majority of current fossil gas customers (residential, commercial, and industrial) will transition to electricity by 2050,” reads part of the plan that calls for electrification of buildings — that is using electricity rather than gas to heat homes, offices, schools and industrial spaces.

The move hasn’t come without some controversy. And it’s an example of how language and semantics play a role in discussions about climate change and how to combat it.

There are some technical reasons for changing the terminology. Natural gas, for instance, is in fact a fossil fuel.

But using the term fossil gas rather than natural gas could also be seen as part of a larger effort to sell the state’s clean energy plans to the public.

As policymakers enact an ambitious shift toward renewable power such as solar and wind, New Yorkers will see changes — in the kinds of cars they drive, the way they power their homes and probably in their energy bills, which will likely rise, at least in the short term, due to the changes.

With that in mind, the language used to describe these changes is important in convincing the broader public that the cost is worthwhile in order to fight global warming.

Council members reaffirmed that idea during a meeting last month when they voted to swap the term fossil gas for natural gas in a chapter about infrastructure such as pipelines in the draft scoping plan.

“They said, and I agree, that calling gas ‘clean’ or ‘zero emissions’ or ‘natural’ is misleading. They further suggested calling gas ‘fossil gas’ rather than ‘natural gas,’ ” explained Robert Howarth, a Cornell University ecology and biology professor who serves on the Climate Action Council. The initial suggestion, he explained, came from a subcommittee of the CAC.

“We have agreed that ‘fossil gas’ is less misleading than ‘natural gas,’ ” he said in an email.

Not everyone on the CAC agreed, though.

“The word ‘fossil gas’ does not exist anywhere in any regulatory document,” said Gavin Donohue, president and CEO of the Independent Power Producers of New York, which represents power plants, many of which are gas-powered.

Switching terms from “natural” to “fossil” will be confusing and misleading to many members of the public, Donohue said.

That’s especially important, he added, since the public hearings over the draft scoping plan have just started.

“My concern was that we’ve got to stop introducing new terminology. That was my worry,” said another CAC member, Dennis Elsenbeck, president of Viridi Parente, which makes electric battery packs to power heavy equipment like front-end loaders.

“The natural gas system is something that everybody is familiar with. I think fossil gas sounds more alarming than natural gas,” Elsenbeck added.

Elsenbeck, Donohue and Donna DeCarolis, who runs the National Fuel gas distribution firm in western New York, were the only members of the CAC to vote against the name change.

But there is research that suggests the wording used to describe a certain type of fuel impacts the public perception.

“The American public perceives ‘natural gas’ much more favorably (76% favorable) than other fossil fuels like oil (51% ) or coal (39%),” according to a 2020 survey by the Yale University program on Climate Change Communication.

This survey compared the term “natural” gas to “methane” gas. Methane is the key component of natural gas.

Surveyors also found partisan differences when they asked about the term “fossil gas” which had a far more negative image among Democrats than Republicans.

“There’s a perception in the public that natural gas is more benign than, let’s say, coal or oil,” added Jeffrey Freedman, a research associate at the University at Albany’s Atmospheric Sciences Research Center.

He noted that methane, which can leak from natural gas facilities at wellheads and other spots is actually a far more potent greenhouse gas than the CO2 from oil or coal.

Using the term fossil rather than natural gas reinforces the idea that this is a potentially harmful fossil fuel.

“You’re trying to wean the public off of something that they are used to using all of their lives,” said Freedman.

Definitions like this may matter quite a bit going forward, especially given the decisions that the Climate Action Council will have to make about our gas infrastructure.

There have been debates about whether the state’s existing network of gas pipelines should be maintained or downsized in future years.

In the regulatory arena, the difference between the words “maintain” and “downsize” can mean a lot. One suggests keeping the lines open and another means eventually closing them down.

“There’s an interplay between the language and the interests that are going on,” said Jennifer Dodge, associate professor of public administration and policy at UAlbany’s Rockefeller College of Public Affairs and Policy.

“If you can change the language in a favorable way, that helps you,” she said.

The language used in discussions of climate change and environmental protection has evolved over the years. An array of interest groups, including political advisers and public relations experts, have played a role in those changes.

Perhaps most famously, national Republican consultant Frank Luntz in 2001 told politicians to drop the term “global warming” in favor of the more neutral-sounding “climate change,” which has since worked its way into the lexicon.

“‘Change’ is a lot less threatening than ‘warming.’ It’s a much more benign term,” said Dodge.

Climate change language has also morphed to some extent. The most outspoken environmentalists, such as Sweden’s Greta Thunberg, now refer to a “climate emergency” rather than climate change.

Time will tell whether New Yorkers in the future refer to fossil gas, natural gas or both. One of the first indications may be the reaction from people who attend the series of public hearings on the draft scoping plan that are now going on around the state.

Either way, though, framing the issue will continue to be an important part of this debate.

Editor’s Note: Two things come to mind reading the balderdash gushing forth in the above story highlighted by Jim.

First, have none of this folks ever read “Nineteen Eighty-Four” or at least heard of Newspeak, the fictional language imagined by Orwell in his famous dystopian novel? It’s about a totalitarian government that created a mandated language and vocabulary designed to limit individuals’ ability to think independently and in anything other perfect symmetry with the elites in charge. The folks speculating about how to manipulate and hide stuff about natural gas are merely the latest speakers of Newspeak. They are purely useful idiots for the corporatists and ideologues behind so much of the global warming scam.

Secondly, a word about Frank Luntz, who I heard speak to a room of perhaps 200 fellow oil and gas folks during the 2012 campaign of Mitt Romney for President. After watching this “full of himself” fellow perform, I completely understood why Republicans have a reputation for stealing defeat from victory. He spent the entire talk wandering around the room pontificating on his own version of Newspeak; suggesting we needed to hide who we were, be less truthful and more obtuse. He didn’t use those words, of course, but that’s what he meant. He specifically told us not to use the word “capitalism.” This is one of the reasons corporatism has made such strides; because few understand it’s not capitalism and is the real enemy. Mitt Romney clearly listened to Luntz and others like him. That’s why Barack Obama and Joe Biden won a second term. Luntz’s strategy was one for losers and it always will be. Speaking truth to power is still where it’s at.