Tornado Tall Tales Being Spun Off Tragedy by Biden

[Editor’s Note: Global warming, a rebound from the Little Ice Age, is mostly natural, but we must not forget heat is better than cold and more CO2 is better than less.]

Present-day warming has been termed a crisis, and modern economic development a cancer. But what if I told you that much of the recent advancement in human prosperity would have been impossible without the temperature increases of the last several hundred years?

A key to the sustenance of any society is food security. Today’s world should be grateful for today’s relative warmth as well as higher levels of atmospheric carbon dioxide levels because both have been instrumental in propelling plant growth globally.

A review of human and climate history reveal a strong link between the rise and fall of temperature and the rise and fall of civilization, and it is just opposite of what the climate doomsayers are telling you. Past warming periods were much warmer than our modern temperatures and were associated with times of great prosperity. The intervening cold eras had names like Greek Dark Ages, the Dark Ages and Little Ice Age and were linked to crop failure, pestilence and mass depopulation.

According to historian Wolfgang Behringer, “…cooling has always resulted in major social upheavals, whereas warming has sometimes led to a blossoming of culture. If we can learn anything from the history of culture, it is that, even if humans were ‘children of the Ice Age,’ civilization was a product of climatic warming.”

Are you among those wishing for lower global temperatures? According to climatologist Dr. Michael Mann, the ideal temperature for the planet would be “the temperature range that prevailed since the dawn of civilization until we began burning fossil fuels.” That timing would place humanity squarely in the death-dealing cold that prevailed during the aptly named Little Ice Age (LIA), ca. CE 1250–1850. This was a cold period of global extent.

The LIA froze rivers such as the Thames, which rarely has done so in the modern era. Here in the United States, we know that Martha Washington enjoyed ice during the summers at Mount Vernon that was harvested from the Potomac River and stored in an icehouse on the grounds. These thick freezes were an annual event in the 18th century, while today they only occur occasionally during unusually cold winters.

Historian Philipp Blom says that the Little Ice Age resulted in a “a long-term, continent-wide agricultural crisis” in Europe. His book, Nature’s Mutiny: How the Little Ice Age of the Long Seventeenth Century Transformed the West and Shaped the Present extensively captures the collapse of Western society owing to crop failure in the 17th century. 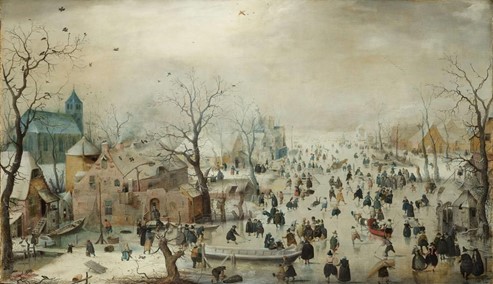 Winter Landscape with Ice Skaters (c1608), by Hendrick Avercamp. Avercamp was deaf and mute and specialized in painting scenes of the Netherlands in winter. Courtesy of the Rijksmuseum, Amsterdam

Famine killed millions through starvation and disease. A priest in France wrote:

“The crops that had been sewn were all completely destroyed…. Most of the hens had died of cold, as had the beasts in the stables. When any poultry did survive the cold, their combs were seen to freeze and fall off. Many birds, ducks, partridges, woodcock, and blackbirds died and were found on the roads and on the thick ice and frequent snow. Oaks, ashes, and other valley trees split with cold. Two thirds of the vines died…. No grape harvest was gathered at all in Anjou…. I myself did not get enough wine from my vineyard to fill a nutshell.”

Thankfully, the natural climate cycle took its own course, and the cold period gave way to a warming period that began more than 300 years ago and continues in fits and starts to this day. 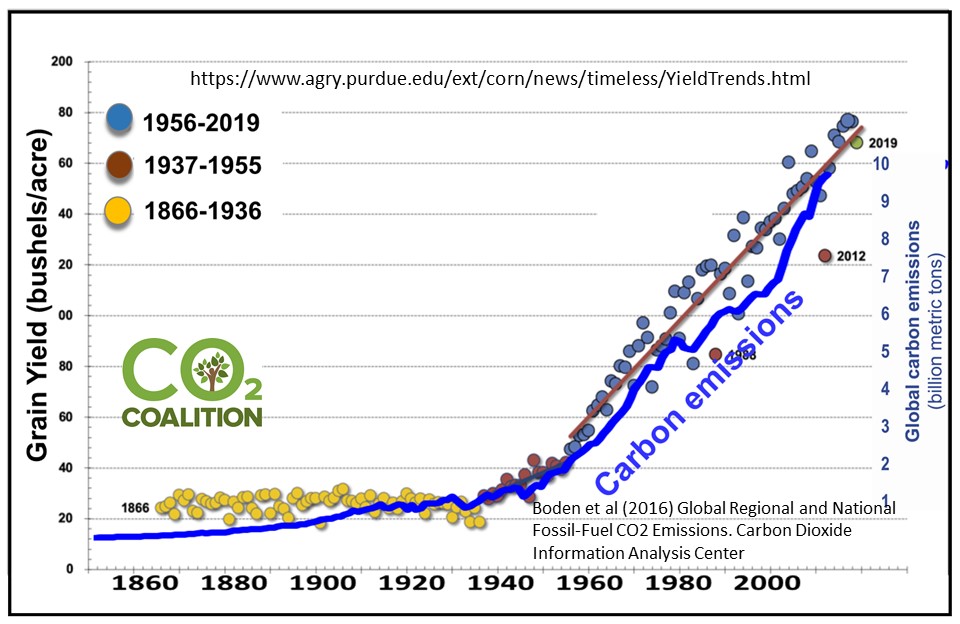 While it is true that the 20th century’s remarkable increase in crop growth was greatly aided by advancements in agricultural technology, it would have been impossible if the earth hadn’t warmed to levels more conducive to plant life. As if this booster in temperature weren’t sufficient, the growth of plants has been further turbocharged by increasing carbon dioxide that is likely the result of the industrial use of fossil fuels.

Human and climate history reveal that we should welcome the warmth and fear the cold, quite opposite the story that the Climate Industrial Complex peddles.

Gregory Wrightstone is a geologist, executive director of the CO2 Coalition, expert reviewer for the Intergovernmental Panel on Climate Change and author of the bestselling book Inconvenient Facts.

This commentary was first published at American Greatness on January 28, 2022