Governor Andrew Cuomo has been quick to sign onto a Green New Deal but his numbers don’t add up at all without natural gas and/or more nuclear energy.

Governor Cuomo recently announced the New York State Green New Deal a “nation-leading clean energy and jobs agenda that will put the state on a path to carbon neutrality across all sectors of New York’s economy”. I think the Governor and advocates for this agenda need to explain how this will work, how much it will cost and how much it will affect global warming before we are committed to this path. 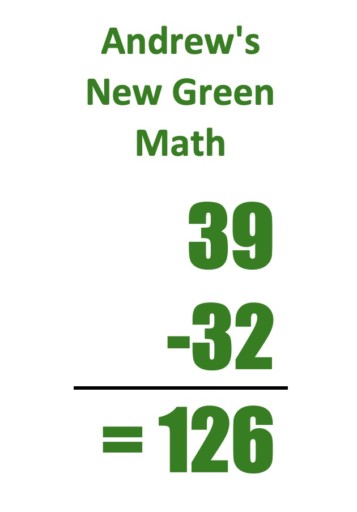 This summary of the program is one of a series of posts on the New York State Green New Deal. Cuomo billed this as part of his 2019 Justice Agenda:“nation-leading clean energy and jobs agenda that will put the state on a path to carbon neutrality across all sectors of New York’s economy.”

There were 12 proposals in part 4 “Launching the Green New Deal” of this agenda. I reference my summary posts on each below and include my indented and italicized comments.

Components of the Green New Deal

In 1977 there was a blackout in New York City and the New York System Independent Operator now has a rule that requires 80% of generation to be provided in-City. In 2017 the daily energy needed for the peak hour period was 219,078 mWh. Because renewable energy is diffuse the area needed for that much renewable power is likely unavailable within the City. This could be a fatal flaw in this mandate and the State must develop a plan to confront this reality.

The path re-establishes a Climate Action Council and mandates a plan to meet the goals. Presumably they will use existing programs as a template. If the New York Green New Deal were to rely on the “successful” RGGI program for the reductions proposed the State is looking at a cost of $35.2 billion.

A Multibillion Dollar Investment in the Clean Tech Economy that will Reduce Greenhouse Gas Emissions – There will be $1.5 billion in competitive awards to support 20 large-scale solar, wind, and energy storage projects across upstate New York.

The competitive awards announced in January 2019 total $1.5 billion and are supposed to provide more than 2 million tons of carbon reductions. Assuming that they really meant carbon dioxide for the 2 million tons that means 750 dollars per ton reduction cost. In 2015 NYS electric sector CO2 emissions were 32 million tons. If the New York Green New Deal were to rely on the NYSERDA competitive award process for those reductions the State is looking at a cost of $24 billion.

Expand NY Green Bank and Catalyze at Least $1 Billion in Private Capital – The NY Green Bank is a $1 billion investment fund designed to accelerate clean energy deployment and they will expand its charter.

In order to reach the 100% clean power goal by 2040 the plan doubles distributed solar deployment to 6,000 megawatts by 2025, up from 3,000 megawatts by 2023. If the Green Bank were to finance the deployment of 3,000 MW at the rate observed with their existing investments they would need over $2 billion. In 2015 NYS electric generation sector emissions were 32,000 tons. If the Green Bank was to finance the replacement of solar at the rate observed they would need over $41 billion.

New York State is the fourth most energy efficient state in the country now which is no small part due to investments already made which presumably improved the most efficiency at the lowest rate available. Given that the cost-effectiveness of future projects will be less the 20% further reduction goal is ambitious.

Direct State Agencies and Authorities to Pursue Strategies to Decarbonize their Investment Funds and Ramp Up Investment in Clean Energy – Commence a process to review and evaluate the feasibility and appropriateness of divesting from fossil fuels for agencies and authorities.

I think the most important investment strategy for the $240 billion dollars in New York funds should be economic rather than signaling virtue. The rationale for this mandate to divest is clear: divestment is not an investment strategy, or a way of putting direct economic pressure on energy companies. It is a political statement.

Increase Carbon Sequestration and Meet the U.S. Climate Alliance Natural and Working Lands Challenge – This will establish a carbon sequestration goal for our natural and working lands.

Based on results to date it is not clear how cost-effective these programs will be. However, the program that facilitates carbon sequestration in soil is a “no regrets” solution.

The concept is to turn carbon dioxide into fuel and wasteful chemicals. While I am not a chemical engineer the idea that the waste products can be turned into a fuel without a whole lot of energy going back into the system seems a bit far-fetched. On the other hand the concept of using CO2 instead of sequestering it underground is appealing.

Deliver Climate Justice for Underserved Communities – The Green New Deal will help historically underserved communities prepare for a clean energy future and adapt to climate change by codifying the Environmental Justice and Just Transition Working Group into law and incorporating it into the planning process for the Green New Deal’s transition.

While no one argues that underserved communities should not be treated better, I am concerned that the direct costs of these programs will out-weigh any directed benefits. In my opinion the primary goal of the task force should be to keep electric energy affordable but it is not clear that is the first priority of this component of the plan.

In my opinion this is an example of the political pandering of the Green New deal. If some block of voters is going to be disadvantaged then simply buy them off.

Develop Clean Tech Workforce and Protect Labor Rights – The Green New Deal will continue to require prevailing wage, and the State’s offshore wind projects will be supported by a requirement for a Project Labor Agreement.

In my opinion this is an example of the political pandering of the Green New deal. If some block of voters may benefit from this pork barrel spending then make sure they know there is pork available.

According to the NREL’s 2017 Cost of Wind Energy Review, the levelized cost of energy of off-shore wind is over two and a half times more expensive ($124 per MWh vs $47 per MWh) than on shore wind. For the 9,000 MW of offshore wind mandated the estimated cost would be $6.3 billion.

A recent opinion piece in the New York Times notes that relying entirely renewable power systems is much more expensive and still not practicalthan a system that incorporates nuclear, geo-thermal and fossil-plants. The research paper notes:

However the opinion piece claims that Cuomo’s Green New Deal did not mandate an all-renewables system. I agree that the plan accepts existing nuclear power but I do not believe there is any indication that existing fossil fueled power would be replaced by anything but renewables aside from a platitude that mentions carbon sequestration. The Cuomo administration has consistently delayed or disapproved fossil fuel infrastructure so I believe it is appropriate to assume that the 51,473,000 MWhr of electric energy produced by coal, oil and natural gas in 2017 would be replaced entirely by renewables in the Green New Deal.

This is the challenge that Climate Action Council must address. How will that electrical energy be replaced, how much will that cost and what effect will that have on the environment.