[Editor’s Note: Dr. Peter Ridd was fired and persecuted for challenging global warming orthodoxy and hyperbole regarding the Great Barrier Reef, but he was completely correct!]

Australia’s Great Barrier Reef (GBR) is, well, great. But the popular media won’t report this good news, so I will.

The GBR is made up of approximately 3,000 reefs covering an area nearly the size of California off Australia’s eastern coast. The condition of its coral is frequently referenced as an indicator of the reef’s health, regularly in the context of the supposed damage global warming is doing to the planet. 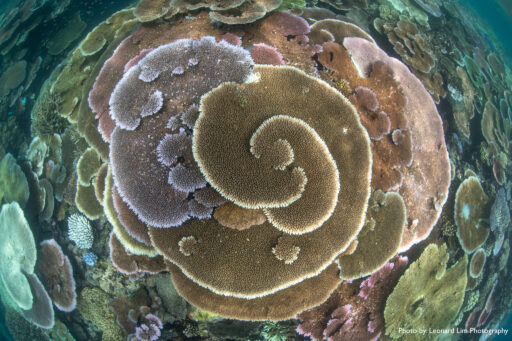 The reef now has more coral than any time since records began in 1986, according to  the Australian Institute of Marine Science (AIMS). There is roughly 20 percent more coral on the GBR than last year, which itself equaled a previous record year. All three major regions of the reef now have excellent coral cover and AIMS states that two regions are at record breaking high levels.

As of the latest 2022 survey of the GBR, coral covered 34 percent of the seabed, double the lowest coverage recorded in 2012. There are many types of ecosystem on reefs other than coral – 34% is a remarkably high number.

This coral health exists despite four supposedly massively destructive and unprecedented bleaching events striking parts of the reef since 2016 – all allegedly due to climate change and one as recently as this year. Coral reefs typically take five to 10 years to recover from major damage, so how can GBR be enjoying such good health this soon? Is it possible that reef-science institutions exaggerated the damage in the first place to advance the global warming narrative? Perhaps. 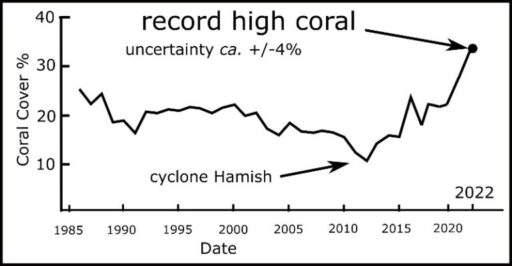 However, 36 years of AIMS data show that large amounts of coral occasionally die — usually from cyclones, hot-water bleaching, or starfish plagues — but that recovery is often fast. For example, the Cooktown region suffered moderate coral loss after a 2016 bleaching event but had recovered by 2021. By far, the biggest loss of coral was after Cyclone Hamish smashed the southern half of the reef in 2009. Recovery was largely complete by 2016.

These marine events, which have been going on for millennia, are akin to terrestrial bushfires from which the land quickly recuperates. However, untrustworthy institutions of science and other climate alarmists use them to foster hysteria over a climate that has vacillated between warmth and cold for millions upon millions of years.

These same purveyors of hyperbole then ignore or downplay news of the reef’s convalescence. For example, last year’s good news of coral coverage matching previous records was dismissed by claims that only the fast-growing coral had recovered. Poppycock! It is these species — staghorn and plate coral — that are most delicate and susceptible to damage and most obvious in their recovery.

The exceptional news this year is that almost every region of the reef is doing extremely well. For so much of the reef’s coral to be this healthy at the same time is very unusual. Normally, a large chunk of the reef is recovering from a major cyclone that drags down the average. So when the reef’s overall coverage is at today’s level of more than thirty percent of the area, the GBR’s health is indeed good.

This overall health is only apparent if the condition of the entire reef is reported. For whatever reason, AIMS stopped in 2017 averaging regional data to provide a composite view of the reef’s condition. I had to do that calculation for recent years myself to get a complete picture. Is this another instance of obscuring positive data?

Those who would play down news of exceptional reef health should consider the unnecessary emotional damage being inflicted on children worried about their future. Elementary school students in America speak of their premature demise because of a faux climate emergency. A 2019 Australian survey reported that “around half of residents, tourists and tourist operators surveyed, and almost one quarter of fishers, report significant Reef Grief.”

The fact is the Great Barrier Reef is brilliant. Church bells should be ringing. People should be celebrating. We will always worry about the GBR because it is precious. But there are more pressing matters than coral that has been waxing and waning and a climate that has been warming and cooling for eons.

Data may be found HERE.

This commentary was first published by the Daily Wire on August 10, 2022. It was republished in its entirety with Dr. Ridd’s permission here.