[Editor’s Note: Proposition 2, a proposed “Green Amendment” to the New York State Constitution will only enrich greedy trial lawyers while depriving New Yorkers of their rights]

Hunters and farmers are environmentalists and conservationists for the sake of the environment and not for power and control.  If they sit silently by and don’t vote this November or vote because something sounds nice, they will be losing their rights as property owners, hunters and gun owners, all in the name of so-called “environmental justice.”

On the back of November ballot are five proposals.  Proposition 2 amends the NY State Constitution to provide that “each person shall have a right to clean air and water, and a healthful environment.”  Few will speak out against it, as it is so appealingly labelled and is framed in “environmental justice is racial justice” terms. The Left, of course, uses racism like Dirty Harry used his .44 magnum, so this should immediately give you pause.

The environment relates to health and if you liked the way health issues have impacted our country’s social and economic system during the past year, you will love Proposition 2, the “Green Amendment.” 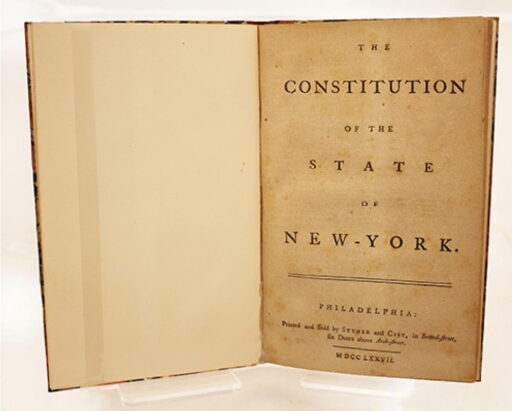 Do we need another law? NYS has strict environmental laws and a state bureaucracy to enforce them.  (Think hydro-fracking. Try getting a pistol permit in a Democrat controlled city.)  But a NYS Constitutional Amendment supersedes any state laws and the radical Left wants that really big hammer to beat us over-the-head in support of their “green” agenda and, more importantly to them, their never-ending pursuit of power.

The federal Constitution specifically limits federal government power and puts law-making exclusively in the hands of the legislature – not the courts.  This amendment would have the opposite effect by giving the NY government virtually unlimited power to legislate through bureaucracies and the courts by labelling everything environmental. (Note how the Left changed the definition of “infrastructure” to be all inclusive.)  If the Left can’t get a law passed, activist judges will legislate by setting environmental standards, even though judges don’t have the expertise to determine what constitutes an undefined “healthful environment.”

This amendment might better be called “Full Employment for Lawyers”. It doesn’t define terms or spell out enforcement and penalties, which provides maximum latitude for lawyers and political activists to label anything “environmental” and then challenge both state regulations and private industry.  Philip K. Howard said, “It would start an arms race among environmental groups and social justice groups for who can concoct the most dramatic theories.”  It will allow delays and raise legal costs both for private industry and for public agencies.  (Public agencies don’t care; it’s only taxpayer money.  But private businesses vote with their feet and we can’t afford to lose more jobs.) A few states have similar laws but they are more narrowly defined to try to eliminate these issues.

Private property rights will disappear.  Want to put up a shed on your lot?  Want to blacktop your dirt driveway? Maybe plant some trees and bushes?  Are you a farmer and want to hunt on your property?  Expect environmentalists to demand that you pay for an environmental study.  Farmers will be particularly open to lawsuits.  And be careful that you don’t cross a local bureaucrat.

Remember when hydro-fracking was knee-capped by Andrew Cuomo and Joe Biden stopped pipeline construction (just before he gave the Russians the go-ahead on their pipeline) and hydro-fracking was stopped on government land and off-shore (just before Biden asked OPEC for more oil)?  Under Proposition 2 the cost of implementing any of those in New York State would be prohibitive, even if Dr. Fauci gave them a complete bill of health.

NYS is committed to eliminating carbon emissions from the electrical grid by 2040, which necessitates construction projects.  Construction is a dirty, noisy business.  (Remember how hydro-fracking was condemned because of construction issues.)  This amendment will cover environmental impact during construction as well as the finished product.  (Noise is a part of the environment.  Perhaps “silencers” will be more effective on jackhammers than they are on guns.)

Proposition 2 can be interpreted to require a quiet environment.  Guns make noise, which will be an environmental issue for the courts to sort out.  Are “silencers” the answer?  They are illegal in NY State.  Since they don’t really silence, maybe that isn’t such a big deal.  On the other hand, if it outlawed Rap Music…

Proposed law, in the form of S5058, prohibits the use of lead ammunition on land contributing surface water to the New York City water supply.  Ballot Proposition 2 gives the gun control left an alternate avenue to implement S5058 and eliminate land available for hunting and, thus, eliminate guns and hunting.  If it’s okay for NY City, why not give equal protection to other city’s municipal water supplies.  Then, private wells must also be protected.  Land available for hunting will disappear, all by judicial and bureaucratic fiat.

It shouldn’t be enough to give a proposal a catchy title.  The devil is in the details and this proposal will create a hell of a social, economic and legal environment.  Of course, Proposition 2is about creating a “healthful environment” but who would have thought that was the definition of Hell?  Actually, Ronald Reagan did think of it when he said, “Socialism only works in two places, Heaven where they don’t need it and Hell where they already have it”.