Green Fraud and Why No One Wants to Talk About It

[Editor’s Note: Robert Bradley provides a review of Marc Morano’s new book: Green Fraud: Why the Green New Deal Is Even Worse Than You Think.]

“Let’s expose this dangerous charade. The Green New Deal is not green. It’s not new. And it’s not a good deal for America.”

Outside of a too-brief index, Marc Morano’s Green Fraud: Why the Green New Deal Is Even Worse Than You Think (Regnery: 2021) is a worthy addition to any library concerning today’s raging debate over climate and energy. It is one-stop shopping–400 pages worth–for a mount of eye-opening, sometimes amusing, but ultimately sad exaggerations and puffery from the Church of Climate. 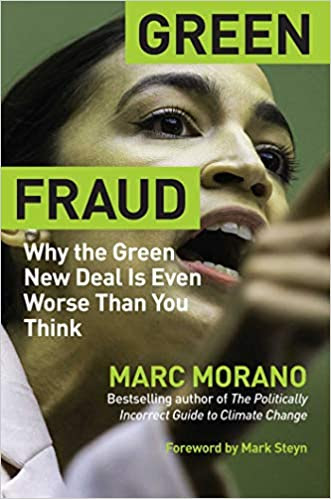 John Holdren, Bill Nye, Bill McKibben, and Joe Biden come in for a shellacking. The term central planning gets a lot of mention, as does bureaucracy and bureaucrats.

Greta and OAC get the most mentions of all. Al Gore goes unmentioned, as does James Hansen; they are taken care of in Morano’s other full-scale treatment, The Politically Incorrect Guide to Climate Change (2018).

Morano is a celebrity for the calm, reasoned side of the climate and energy debates. He is the proprietor of Climate Depot, a project of the Committee for a Constructive Tomorrow. With personality, he makes the crazy serious fun (how can you not?) in an era of ‘climate anxiety.’

One question the reader will have while turning the pages is how did all this get so far? The answer is a tsunami of Left foundation money, government push, politicized science (where believed-to-be theory trumps data), and mainstream media (MSM) bias. Stories about all this salt the book.

Perhaps the best way to review this particular book is by random sampling (true–no cheating).

I just opened the book to page 183. There is a sidebar story, “Where is Fertilizer, Cement, Plastic Going to Come From?” It is about Bill Gates at a 2018 Stanford University Energy Forum calling out the modelers for a lack of realism about energy supply and demand.

Page 54 presents data on tornadoes and hurricanes. Good stuff as that time of year is either upon us or nearly so. Expect every example of extreme weather to be reported in the MSM as either the result of or consistent with man-made climate change.

One more toward the back of the book’s main text: pp. 246–47 on “Woke and Weeping Climate Scientists.” Examples of government scientists all-in on the politics. Church-of-climate scientists who cannot think in terms of economics, entrepreneurship, and adaptation. And ignorant scientists who do not (chose not) to understand energy 101.

Marc Morano is the fellow the other side just wants to cancel. Put him in any forum, and a rat-a-tat of arguments and examples will leave a Sci-Guy-Nye high-and-dry.

Of course, Morano doesn’t get the opportunities and attention he deserves against, say, the angry, dodgy Michael Mann. But the last laugh will always be his as the great climate alarm gets disentangled and critically reassessed as time goes on.

Judith Curry in her review of Green Fraud noted: “The response from the climatariat has been attempts to get the book ‘cancelled’.” But, she added:

The sorry present of the climate/energy debate will need some vital books come the autopsy. When that time comes, Green Fraud will serve as a go-to book. In the meantime, America, read away as part of a public opinion shift toward climate realism and energy basics.