Even before Greta, Europe was experiencing green giddiness that only reflects their own sense of superiority as they yet again propel themselves toward disaster.

Europe, like so much of the West today, is seemingly governed by the worst ruling class. It is a group of supercilious, politically correct authoritarians who have let themselves be conned into green giddiness by corporatist World Economic Forum types. And, now they are paying the price of that green giddiness in unaffordable electric rates and dependency on Russia for gas that has left them vulnerable to the latter’s hegemonic aspirations. 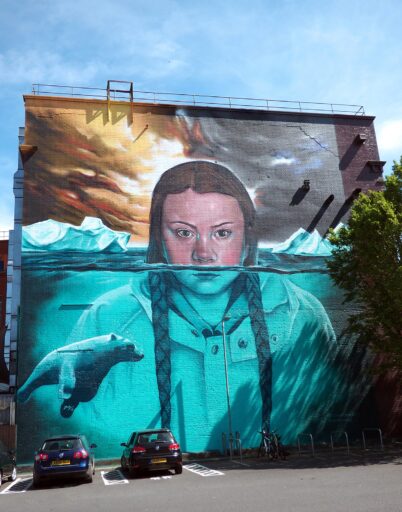 Wall mural of European green idol Greta Thunberg, the princess of green giddiness who the continent has followed to disaster.

What is happening in Ukraine is Europe’s problem. Joe Biden is only pretending it’s our problem to distract from his own pitiful performance as the White House occupant. That doesn’t mean Ukraine isn’t important to us, though. It is crucially important as a lesson regarding the real life impacts of a green giddiness so blind to reality that it led Europe to follow a teenager in love with herself. It adopted Greta’s platform, in fact, and got sucked into a whirlwind of Russian politics and Western corporatism.

The Energiewende started before Greta, of course. It was the creation of Angela Merkel who, it must be noted, was an East German 35 years before she became a German, and grew up in a world where there was no distinction between business and state. She was, though democratic in spirit, comfortable in using government to direct the affairs of markets and that is precisely what her Energiewende adventure in green giddiness was all about. She was going to show us all how to conquer global warming.

The result of all her green giddiness was a disaster for ordinary Germans paying electric bills and now dependency on Russian gas. All of this was easily predictable and back when we had a President, in 2018, Donald Trump bluntly told NATO where buying gas from Russia would lead:

When Trump spoke about a former German Chancellor being involved with Russia gas, he was referring to Gerhard Schroeder, who just got further involved by being put on the Gazprom board. This is corporatism—a blending of business and state—taken to a whole new level. It is incredibly corrupt and, as Trump noted, it wasn’t just the desire of Germany to buy gas from Russia that was the problem. It was also the shutting down of Germany’s own dependable energy sources as part of the Energiewende that forced it to go to Russia. The Energiewende wasn’t just green giddiness; it was green giddiness enabled by all those who would profit from it.

What a mess. And, this morning we learn Germany has now decided to stop cooperating in putting the Nord Stream noose around its neck less than nine months after a hapless empty hulk of leader named Biden gave it his ok. Later is always better than never, they say, but when will Europe ever learn? When will it stop seeking to demonstrate its superiority over us? Never. Europe is a highly class conscious society, which is why so many of our own elites ardently seek to emulate it, of course.

Yes, green giddiness has a home here, too. Our buffoon in chief has apparently made it his highest priority, killing the Keystone XL with an executive order, one you can be sure he never read, on his first day in office. His puppeteers have, since then, had him take every conceivable action he could, on his own, to strangle American oil and gas. As Alex Berenson, the New York Times reporter forced out for telling the truth about the Wu-Flu, notes in his sub-stack:

Once again, Western political and media elites find themselves in the unfortunate position of denying reality obvious to anyone with eyes, or a wallet.

This time, they are lying about the economic and now political crises their “green” energy policies are causing, particularly in Europe. These lies may damage them even more than their Covid fantasies did, because they are even more obvious to people outside their bubble.

Anyone who drives is aware of the recent spike in oil prices, now nearly $100 a barrel – a rise due in part to Democratic efforts to discourage American oil production.

But Americans may not know about the catastrophe in Europe’s electricity and natural gas markets. That crisis is even more directly linked to broader efforts to “sustainable” fuels that so far have proven distinctly unsustainable…

The entire European Union now emits less carbon than India and about one-third as much as China. In fact, if every American and European stopped emitting carbon entirely and went back to living in caves, the world as a whole would still produce more carbon dioxide now than it did 20 years ago…

The point is, the Europeans want to do the right thing so that the Chinese and Indians can do more of the wrong thing. They need to set an example…

Electricity bills are expected to rise 54 percent in 2022 as “geopolitical tensions push up natural gas prices which the scarce supply of energy from renewable sources cannot offset.”

The rise in electricity prices led to protests across Europe last fall. Countries like Italy are so worried what a shock this year might bring that they are considering directly subsidizing consumers.

Of course, the subsidies will flow more or less directly to the countries exporting the gas – in other words, Europe will be simultaneously sanctioning and paying for Russia’s little adventure in the Ukraine.

Worse, the subsidies will do nothing to change the fundamental problem, which is that Europe’s green fantasies are unable to produce enough power to keep the grid supplied unless demand goes down (prices are the hinge where supply and demand meet, as anyone who has not taken modern monetary theory knows).

Thus Europe is at the real risk of rolling blackouts. And prices for fertilizer and any manufacturing process that is energy-heavy are also out of control. Germany just reported a 25 percent year-over-year increase in producer prices for January 2022, hyperinflation territory…

None of this insanity will touch the World Economic Forum elites responsible for it, of course. They have private jets on the road, and generators at home.

You know who else it won’t touch much? Our friends in the People’s Republic of China. Xi and the boys have been building coal-fired electric plants faster than you can say tectonic shift global in global power. They now burn almost half the coal in the world. (True.)

Yeah, they’re pretty hedged against rising natural gas prices. Which is one less reason for them to care about Putin’s little adventure.

But Europe has some hard choices ahead. Even though energy prices are global, the United States is in slightly better shape, because our hydrocarbon industry is big and powerful enough that we haven’t gone as far down this road as the Europeans…

Of course, the elites won’t admit any of this. They’re blaming the weather, or Putin, or just doing their best to ignore it.

Yes, that’s what Western elites do. They set examples for us by using us, not themselves, to make the point. Then, they lie as a way to ignore the consequences of their own green giddiness and other manifestations of their condescension toward their inferiors. That is, until we have to rescue them, yet again.