Green Jobs? Some Maybe, But No Bonanza and Questionable Economics

[Editor’s Note: Jerry Russell talks about his new solar system and the green jobs it created, which were temporary and apparently not that high paying.]

I recently purchased a solar PV installation for my home. I’m sure that everyone who has read my columns on Natural Gas Now assumed that I am firmly against alternative energy or anti solar. The truth is that I have always been interested in solar power generation, even though it has always seemed not to be cost effective. 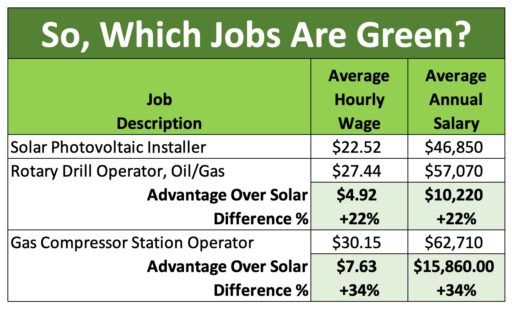 As the costs of electricity in New York continue to rise and, sadly, because I don’t expect to see natural gas development in the near future, I decided to take the chance and purchase a system to offset my home power use.

Time will tell if my investment will pay off. I hired one of the top solar installers in the Southern Tier of New York. A competent and hard working crew, did the construction and installation. I think all together there were six different employees that worked on parts of the construction and one subcontractor who did the excavation work. I was glad to see a wide range of ages for this crew, from 20 somethings to 50 year olds.

I had many opportunities to interact with this crew while we both worked outside as I carried out my farm work. What I noticed is that these green jobs were no different than those offered by any other construction company in our area, doing whatever it takes to stay employed. They told me that they complete about 60 solar installations a year which seems substantial. They mentioned that they also do ductless heat pump installations.

These folks were a great bunch of workers and I am very happy with their construction of my system. With New York State planning to be the new solar energy capital, hopefully their business will pick up, but I don’t see it expanding to thousands of new jobs and it seems the jobs were temporary and of lower priority, in terms of financial importance, than snow-plowing, so it’s hard to see how green jobs are going to revitalize the Southern Tier.

Aside from the question of just how viable economic revitalization via green jobs really is, it’s likewise unclear how feasible solar energy is, even with the subsidies. I’ve had five good days of sun in the two weeks since I turned the system on. I have produced half of the electricity I’ve used. I can pay this system off in 10 years if I can produce 100% of my own energy. I’ll let you know if my gamble pays off.

Editor’s Note: If it turns out Jerry made a good investment it will be because of subsidies that made the system affordable. And, his comment regarding there being only five days of good sun in two weeks, illustrates the problem. Not only is the capacity factor of solar energy very low (5/14 = 35% and that doesn’t account for long nights), but electricity made from natural gas is essential to keeping the heat and lights on at night. It’s all about dispatchability and the resiliency of the energy system. As for those green jobs? Well, if snow plowing is better financially then they’re not going to rescue any economy.