[Editor’s Note: There are, as the quote goes, none so blind as those who refuse to see. That’s the case with our electric grid, which is incapable of delivering green energy.]

To reach the Biden administration’s goal of a zero-carbon grid by 2035, U.S. generation capacity would have to triple compared to its 2020 level and power line capacity would have to double or triple, according to a report from the National Renewable Energy Laboratory (NREL). Princeton University researchers, however, believe that grid capacity estimate maybe too low, requiring increases that are 2 to 5 times higher than today’s levels by 2050.

The upshot is that the generating sector will need massive capacity growth and massive investment to reach President Biden’s goal of a net zero carbon grid. And, it is clear that no one knows exactly what is needed nor how much it will cost. Nevertheless, the United States is rushing down that path, which may lead to self-destruction and third-world electricity reliability and power security. Renewable energy is expensive.

Because of its intermittency, it needs massive battery storage to provide backup when the sun does not shine and the wind does not blow which researchers do not include in their renewable cost estimates. It also means adding grid capacity of huge magnitude because wind and solar resources are far from demand centers.

NREL assumes due to end-use electrification and electric demand associated with hydrogen production that total electricity generation will grow by about 95 percent to 130 percent from 2020 to 2035. Wind and solar provide most (60 percent to 80 percent) of the generation in its four main scenarios. Nuclear capacity more than doubles in one scenario, adding 200 gigawatts between 2030 and 2035, reaching 27 percent of generation, while in the other three scenarios, it represents 9 percent to 12 percent of generation, largely from the existing fleet.

The overall generation capacity grows to roughly three times the 2020 level by 2035, including a combined 2 terawatts (a terawatt is 1000 gigawatts) of wind and solar, which requires growth rates of 43 to 90 gigawatts per year for solar and 70 to 145 gigawatts per year for wind by the end of the decade. That would more than quadruple the current annual deployment levels for each technology. Across the four scenarios, 5 to 8 gigawatts of new hydropower is deployed by 2035 by adding capacity at unpowered dams and uprates at existing facilities, and geothermal capacity increases by about 3 to 5 gigawatts by 2035.

In all scenarios, significant transmission is constructed in many locations, and significant amounts are deployed to deliver energy from wind-rich regions to major load centers in the eastern United States. Total transmission capacity in 2035 is 1.3 to 2.9 times greater than current capacity. Beyond already planned additions, these transmission builds would require 1,400 to 10,100 miles of new high-capacity lines per year, assuming new construction begins in 2026.

The four scenarios deploy 120 to 350 gigawatts of diurnal storage to help support power system resource adequacy (ensuring demand for electricity is met during all hours of the year) and better align output of wind and solar with demand patterns. Storage includes diurnal storage with a discharge capacity of 2 to 12 hours, which includes batteries and pumped storage hydropower but could also include a variety of technologies under various stages of development.

The Princeton study considered 5 pathways to reach a net zero economy by 2050. Transitioning to net-zero relies on replacing long-lived assets with low-carbon alternatives as they reach their end-of-life. By 2050, electricity generation is expected to be double to quadruple today’s levels. Nearly all coal-fired capacity retires by 2030 in all cases.

Wind and solar generation grow more than 4-fold by 2030 to supply about half of U.S. electricity in 4 of the scenarios. In the fifth scenario, wind and solar generation grow by a factor of 3 by 2030 to supply one-third of U.S. electricity demand. By 2050, wind and solar provide 85 to 90 percent of generation in three of the scenarios, 44 percent in one scenario where they are constrained and 98 percent in another scenario. Wind and solar capacity deployment rates set new records each year unless they are model constrained, with extensive deployment across the United States. Batteries for short-duration storage reach 53 to 186 gigawatts installed by 2050.

In one scenario, nuclear power capacity would be increased by up to 250 new 1-gigawatt reactors (or 3,800 small modular reactors). Some nuclear plants are operated 80 years, except in one scenario, where existing plants retire after 60 years and no new construction is allowed.

To ensure reliability, all cases maintain 500 to 1,000 gigawatts of firm generating capacity throughout all years (compared to about 1,000 gigawatts today). When wind and solar expansion are constrained, natural gas plants with carbon capture and nuclear plants expand to pick up the slack. Natural gas combined cycle with carbon capture technology would increase by over 300 (750 megawatt) plants.  Carbon capture technology is very expensive.

The United States is undergoing a shortage of a range of transformers — spanning smaller, pole-top units on city streets to massive units —  that will impede the U.S. ability to add enough new wind and solar generation to meet the country’s net-zero goals. A DOE report stressed the need for transformers to build a zero-carbon grid, concluding that the supply of new transformers must multiply significantly if the nation’s grid is to expand with new wind and solar generation and electric vehicle charging stations.

According to government agencies, transformer supply is a national security issue, even excluding the clean energy transition. Most transformers now in operation in the United States are near or past their designed lifetimes; storms are hitting grid infrastructure harder, depleting transformer reserves; and the Covid-19 pandemic disrupted supply lines for components, doubling delivery times in some cases.

Large transformers handle output as high as 750,000 volts from power plants and solar and wind farms. At the end of the line, transformers step down power output until it reaches the 240 volts standard for delivery to households.

North American utilities bought 1,300 transformers in 2020, while the estimated demand in 2027 is expected to be more than double that amount considering all sizes. According to the DOE report, demand for the $4 million large power transformers is expected to climb from 700 in 2019 to 900 in 2027.

To reach President Biden’s goal of a zero-carbon grid by 2035, and using NREL’s estimates of grid capacity, having enough transformers requires tripling the sector’s current workforce of about 15,000. That’s a major challenge because high schools do not train students in the welding, coil winding and transformer testing necessary, and few universities offer programs for engineers in power electronics, electrical design and quality assurance.

The energy transition requires more critical minerals than traditional sources. An onshore wind plant, for example, requires nine times more mineral resources than a gas-fired power plant. Since 2010, the average amount of minerals needed for a new unit of power generation capacity has increased by 50 percent as the share of renewables has risen.  Wind and solar do not have fuel costs, but they are extremely mineral intensive, and demand is quickly outstripping supply for those minerals, which is being reflected in the prices of these products.

The United States Geological Survey (USGS) under Biden expanded the list of critical minerals first developed by the Trump Administration from 35 to 50 by breaking out rare earth minerals and precious group metals into separate entities and adding nickel and zinc to the list. Of the original 35 mineral commodities considered critical to the economic and national security of the country, the United States lacks any domestic production of 14 and is more than 50 percent import-reliant for 31. This import dependence is a problem because it can put supply chains and U.S. companies and mineral users at risk, particularly when China dominates the mineral supply chains, including most of the processing.

Most mining is done in countries with low environmental and labor standards such as cobalt mining in the Republic of the Congo where child labor is used. Half of the Congo’s largest mines are owned by China. Besides buying mines, China has also encouraged investment in foreign mining projects as part of its Belt and Road initiative to lock up critical minerals, which has enabled China to dominate mineral processing. (See chart below.) 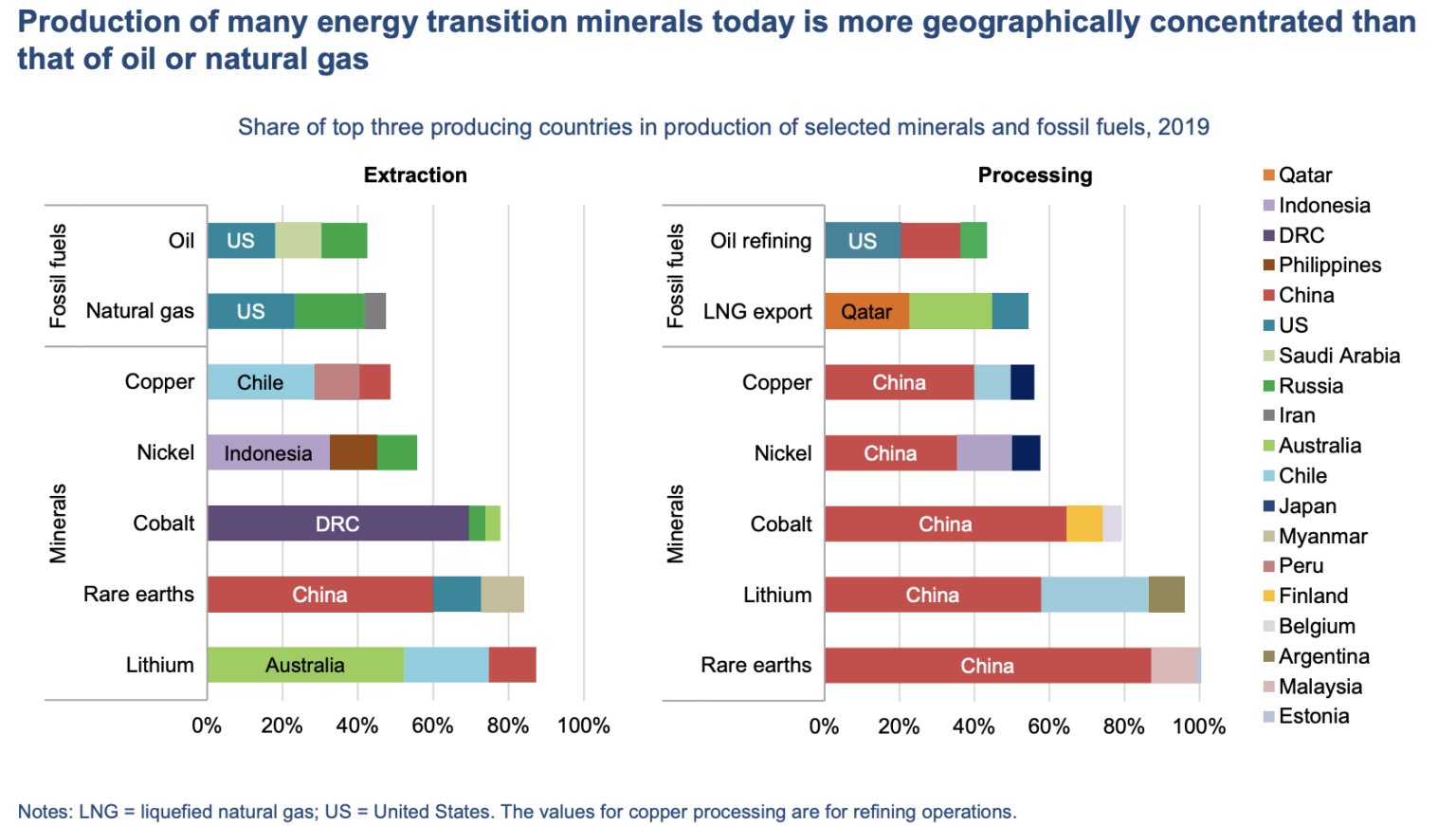 Estimates vary as to the cost and size of a carbon-free electric grid, but most researchers agree that the undertaking will be massive and expensive: replacing fossil fuels with renewable energy, building transmission lines to demand centers, and planning for huge demand increases as the U.S. energy system undergoes almost total electrification.

The undertaking is so enormous that many wonder whether it is even feasible, particularly in the time frame that Biden wants. Estimates of the capacity increases needed for the grid are double to quintuple current grid capacity levels. The supply chain issues that have occurred since the Covid-19 pandemic have helped to create shortages of equipment, parts and metals.