Tom Wolf is facing incredible pressure from the trades to not oppose HB 1100, the package of jobs bills he’s told enviros he’ll veto on their behalf.

A large rally and press conference held in Wilkes-Barre on March 10 in support of House Bill 1100 was also being followed closely by lawmakers and leaders of commerce and industry in the Endless Mountains. The legislation, which has now passed in the Pennsylvania Senate and House of Representatives by impressive margins would provide a tax credit for large corporations to build petrochemical plants to make use of the abundant natural gas produced in the state. 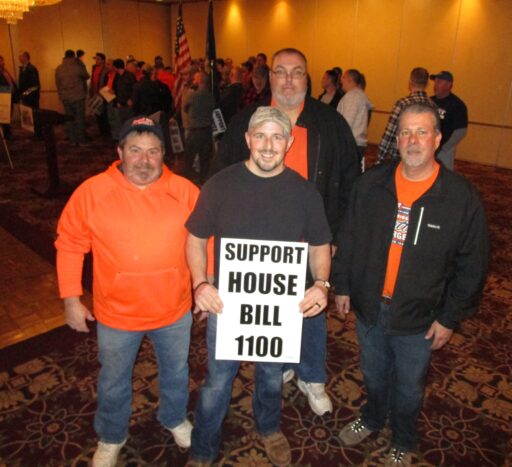 Governor Tom Wolf has suggested he will veto the bill, authored by Rep. Aaron Kauffer and amended by state Sen. John Yudichak, when it reaches his desk. Kauffer, Yudichak and labor leaders who participated in the event insist that the energy and fertilizer tax credits are needed to attract companies like Ellis Energy to Luzerne County. Without passage of the bill, Kauffer maintains neighboring states that do not produce as much natural gas will succeed in steering Ellis and two or three other companies with similar interests away from the Commonwealth.

The timing of the potential veto and that which it would take to orchestrate an override of it could not come at a worse time, according to Yudichak. With a volatile stock market looming and the coronavirus pandemic threatening trade with China, Pennsylvania needs the economic boost that the tax credits could provide, estimated at $3-million in wages and an additional $8-million impact on the regional economy with the construction of just two such facilities.

“If we are looking at a recession, the folks who feel it most are blue collar workers,” said Yudichak.

“This is the biggest jobs bill that we have ever passed,” Kauffer stated.

Kauffer holds the governor accountable for the imminent loss of 800 jobs via the closure of the White Haven State Center and the State Correctional Institute at Retreat and suggests that HB 1100 is the best way to turn things around for northeast Pennsylvania residents.

“This is the first stepping stone in building some fresh economic possibilities for Pennsylvania.” said Kauffer. “We’d love to see him sign the bill into law. But, if he has done nothing at end of the day (by not actively vetoing the legislation), we will have hundreds of new jobs.”

It was the Senate, under Yudichak’s direction, that inserted a prerequisite for “prevailing wages” into the bill when it came from the house, which made it more palatable to union leaders. Additional requirements include a $450-million capital investment and the creation of at least 800 construction jobs, followed by upwards to 200 permanent jobs at each facility.

“The residual jobs cannot be underestimated,” said Kauffer, in reference to increases in patronage to local eateries, hotels and retail outlets. “We know that the charm comes down the road to effect more people.”

“You put 800 people on a construction site, and everything around it blows up,” Tony Siewell, business manager of Laborers’ District Council Eastern PA concurred.

Rep. Jonathan Fritz, who serves constituents in Wayne and the eastern half of Susquehanna County was among those standing closest to the podium during the press conference as Kauffer, Yudichak and others made their case on behalf of hundreds of union laborers who filled the banquet room at the Genetti Hotel.

“The fact is that other states are eating our lunch when it comes to attracting residents and jobs,” Fritz maintained. “Other states roll out the red carpet and, for some reason, Pennsylvania rolls out the red tape.” Like others at the press conference, Fritz was under the impression as recently as August 2019 that Gov. Wolf was willing to support the measure. “It’s absolutely confounding to me that he has since reversed course.”

“HB 1100 is imperative to the future of the Endless Mountains region,” Wyoming County Chamber of Commerce president Gina Suydam, who attended the rally, asserted. “While some of these manufacturing facilities would be built in the lower corridor of northeast PA, these projects will employ our workforce, including labor unions and give new uses to this abundant resource sitting at our feet.”

“Even if they aren’t being built in Susquehanna County, it’s still a signal of development in the northeast, and we will see a trickle of growth from that,” said Montrose Area Chamber of Commerce president Josh Edwards. “You can see that across the state where a whole region grows because of that.”

Edwards was referencing the construction of the Shell Pennsylvania Petrochemicals Complex in Beaver County, which is currently the largest construction project in North America, made possible by a tax credit bill passed in 2012, with more than 6,000 workers currently on site. Rep. Tim O’Neal of neighboring Washington County backed up Edwards’ sentiments with his assessment during the press conference.

“The impacts of these types of projects go well beyond the plant,” O’Neal remarked. “The opportunities in my district for future development are through the roof. It is time, through this bill, that this part of the state (NEPA) gets to cash in.”

“One way or another, in some aspect, our key in Pennsylvania is to try to utilize this gas within our own state boundaries, whether it is in our own county or in other parts of the state,” said Tony Ventello, executive director of the Central Bradford Progress Authority in Towanda. “Any piece of legislation that incentivizes value-added natural gas is critical to enhancing the utilization of that project. It keeps drilling strong and supports all of the things that natural gas enhances.”

“The economic possibilities it represents are just too good to pass up for our region and the entire Commonwealth,” Rep. Tina Pickett, who serves Sullivan County, as well as parts of Bradford and Susquehanna counties, concurred. “I supported House Bill 1100 because of the significant number of jobs it would bring to Pennsylvania and the opportunity to use our natural resources for value-added manufactured products.”

“Down the road, this will increase the need for additional natural gas production,” added Suydam, who sent a letter to Gov. Wolf encouraging his passage of the bill. In it, she wrote, “HB 1100 paired with our prolific natural gas production, robust transportation infrastructure, proximity to market, and workforce will make Pennsylvania economically attractive to these types of projects.”

“It’s imperative to maximize the investment and the employee impact,” Ventello agreed. “Rather than just ship gas out, we need a better understanding of what’s happening locally and on a bigger scale.”

In addition to manufacturing fertilizer, of which Pennsylvania farmers are currently importing 30 percent of what they need, Kauffer noted that another plant might concentrate on the production of methanol to replace diesel and thereby lower emissions.

When asked what they believed to be the biggest obstacles to the passage of HB 1100, Kauffer and Yudichak cited concerns from environmentalists, who had staged a counter-rally in Harrisburg the day prior, a general dislike of the governor’s office for tax credits, and a sense that the state will not have as much control over construction and production as the governor would prefer.

But the investors have to meet eligibility requirements set by the state Department of Revenue, Yudichak put forward. “It’s not like there’s no levers in place to prevent bad players,” he said. And, as he and Suydam noted, the tax credit is only available after construction is complete and the plants are operational.

As for protecting the environment, David N. Taylor, president and CEO of the Pennsylvania Manufacturing Association insisted that the protections are already in place. He referenced a recent study released by the National Academy of Science and the Pennsylvania Department of Environmental Protection that found no evidence of the gas industry negatively impacting aquatic life.

Additionally, Pennsylvania has reduced methane emissions by more than 40 percent in recent years. “These new plants want to capture Methane. That’s their product.” Taylor continued. “When we do all of these things the right way, we can have it all.”

“It’s not true that you cannot be both pro-industry and pro-environment,” Yudichak agreed.

Edwards and other civic leaders in the Endless Mountains speak to the topic from years of experience. “When I look here in our back yard, the companies that we interact with daily are meeting the expectations that are being set up for them. I can’t see that that would be any different with these new plants,” he remarked. “When we increase the usage, we are going to see an increase the royalty checks. For family farms that are just holding on, those royalties are a shot in the arm.”

To Ventello, the passage of HB 1100 makes sense in light of other uncertainties. “China is an unusual dilemma in that it has to do with the virus – a totally unforeseen issue,” he said of the country’s current economic slow down and almost no need for America’s natural gas. “Maybe demand will go back up and we’ll be OK. But we need to do something in the meantime.”

Without new opportunities, Fritz warns, the labor pool that legislators are currently touting could dry up. “These folks enjoy Pennsylvania’s quality of life. They are living the American dream,” Fritz remarked. “But if the jobs and opportunities vanish, they will uproot.”

HB 1100 was originally scheduled to reach the governor’s desk on March 16. As of Monday afternoon, Fritz and other members of the state House were preoccupied with passing a bill that would allow them to vote remotely as Harrisburg began shutting down around them due to the COVID-19 crisis. The Senate was already out and had not moved HB 1100 to the governor’s desk. “It’s in a holding patter until the Senate reconvenes, which might not be until April,” he stated.