[Editor’s Note: Heat waves in Texas and Europe are exposing the foolhardiness of electric grid reliance on subsidized solar and wind, as it wrecks havoc with energy economics.]

It doesn’t matter if it is California, Texas or Europe. Electric grid operators are warning residents to conserve energy during heat waves to avoid blackouts. Texans last week were told to raise the temperatures on their thermostats during a heat wave to avoid rolling blackouts. The state is expected to register temperatures of more than 100 degrees.

During the heat wave, wind power which accounts for about 30 percent of Texas’s power supply faltered and the region did not have sufficient gas-powered plants to pick up the slack, causing the need to call for conservation. Even Tesla asked its vehicles owners not to charge their vehicles during the heat wave. 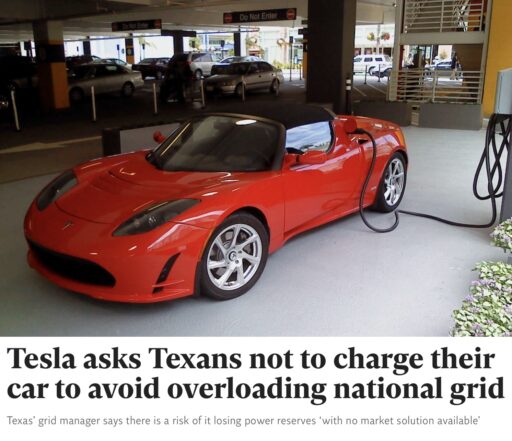 Much of southwestern Europe is under a heat wave that has pushed temperatures over 110 degrees Fahrenheit in some regions, and it has moved to Britain, which has called for a weather emergency with expected temperatures over 100. In Britain, train companies canceled services, schools closed early and ministers urged the public to stay at home. Britain’s “red” alert is meant to convey a risk to life, and health officials stressed that even healthy people could be adversely affected.

Spain was hit with more than a week-long heat wave, which caused over 510 heat-related deaths. Italy, besides dealing with a heat wave, is experiencing its worst drought in years. The government is subsidizing farmers in northern regions and had to shut two hydroelectric plants because there was not enough water. Belgium and Germany expects the heatwave to also hit them. In Germany, the Rhine River is at less than half its normal level.

Britain has closed all but one coal plant and generated 38 percent of its electricity from non-hydro renewable energy in 2021, followed by Germany with 37 percent and Spain with 35 percent. Spain, like Britain, has very little coal generation. Spain gets almost all of its non-hydro renewable energy from wind and solar power, while Germany gets over 75 percent of its non-hydro generation from those intermittent sources.

Each of these countries have more wind power than solar power—from 2 to 5 times more. Europe has been hit by low winds causing the need to supplement the grid with natural gas and coal-generated power.  Each of these countries have nuclear power that generates no greenhouse gas emissions, but Germany has decided to close its remaining nuclear reactors by the end of this year, resulting in greater use of coal and natural gas, if it can get it from Russia and possibly other sources.

The Electric Reliability Council of Texas called on residents to refrain from using electricity from appliances and other sources so that the grid would not be pushed to near-emergency conditions. Bitcoin miners were asked to power down to free up 1,000 megawatts of electricity and soaring power prices gave them an incentive to do so.

Manufacturers also curtailed production due to the strains on the grid and surging prices. Toyota scaled back its production at its San Antonio plant and is considering stopping production most days before 2 p.m.—when demand for power increases—and shortening night shifts through mid-August. Tesla sent a new in-car alert to owners in the state, encouraging them not to charge during peak hours, indicating that the grid operator recommends to avoid charging during peak hours between 3 pm and 8 pm, if possible, to help statewide efforts to manage demand.

In Texas, the least windy time of the year is summer when electricity demand peaks. Wind generation is at its highest in the spring and fall when electricity demand is lowest, which means that wind as a resource has low economic value because it is not available when demand is highest. During this latest heat wave, the state’s natural gas plants couldn’t compensate for the lack of wind and meet surging demand for power caused by the heat wave. The Texas grid became more dependent on gas-fired generators to back-up unreliable wind generation when many of its coal and nuclear plants retired.

The state’s coal and nuclear plants had difficulty operating at a sufficient level to remain open due to the wind and solar capacity forced upon the grid by law makers. Unfortunately for Texas, electricity demand is increasing as its population is growing, particularly as Californians are moving in to avoid California’s COVID lockdowns and other restrictions, and as the state is bombarded by immigrants coming across the border due to federal policy. All of these factors has pushed the state’s grid to a near-breaking point.

Texas, like California, is looking to battery storage to back up its solar and wind units. However, utility-scale battery storage infrastructure is currently insufficient, expensive, and its production is in competition with batteries for electric vehicles, which lawmakers are also pushing.

According to the U.S. Energy Information Administration, the United States has about 4,605 megawatts of total battery storage at the end of 2021, of which California has the most. When fully charged, battery units built through 2020 could produce their rated nameplate power capacity for about 3.0 hours on average before recharging. Therefore, it would take a lot of battery capacity to get through these heat waves.

States and countries that have a sizeable amount of intermittent solar and wind power are having problems avoiding rolling blackouts during the current heat wave and are asking their residents to conserve and their manufacturers to reduce consumption. Electricity operations are becoming weather dependent.

Lawmakers and regulators have pushed wind and solar mandates upon utility companies, forcing them to generate or buy power from solar and wind generators resulting in mass retirements of coal and nuclear power that are now causing these areas to lack sufficient power to always keep the lights on.

When politicians make decisions rather than allow the market to do so, prices go up and security of supply goes down. These examples show that pushing too quickly for “green energy” leads to a lack of power and a direct impact on nations’ energy supply and costs.