[Editor’s Note: Helium resources essential to MRI imaging are invaluable and obtained via natural gas extraction. It’s why fractivism is a dangerous thing.]

Liquid helium, an inert gas extracted from natural gas harvesting, is essential in Magnetic Resonance Imaging (MRI) equipment because it is cold enough to provide the levels of superconductivity required in MRI scanners. Without oil and gas production from which helium production is a secondary product, today’s modern medical imaging would not be possible. Helium cools down the superconducting magnets, which generate images of the human body, to a temperature below 4.15 Kelvin (-269°C).

Because of the cooling required to liquefy gaseous helium, its limited availability, the difficult process to separate helium from natural gas, and its storage requirements, it can be expensive. In fact, the cost of helium increased more than 250 percent in the first 5 years of the recently concluded decade. As a result and also because of its uses by NASA, helium is on the Department of the Interior’s list of elements critical to national security. Nevertheless, production of the element is now imperiled, as some have called for the end to oil and gas leasing on federal lands, controlled, ironically, by the Department of the Interior. 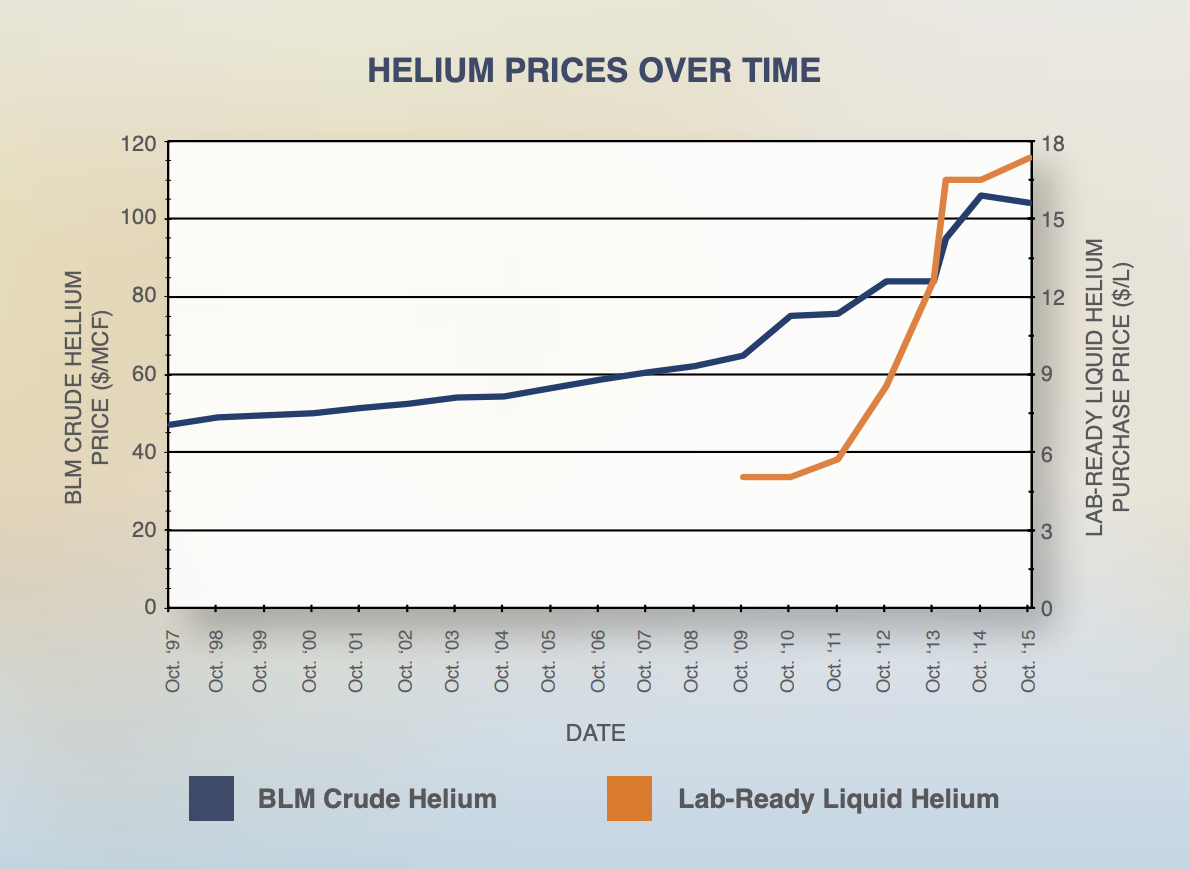 About 10 percent of the overall helium supply is used for party balloons, but the coronavirus pandemic has cut into that demand. In the United States, the largest use of helium (30 percent) is for health care, mainly magnetic resonance imaging, analytical and laboratory applications (17 percent), and engineering and scientific applications (6 percent).

Helium Is Not Renewable

Oil and gas companies harvest helium trapped deep beneath the earth’s surface in natural gas chambers. Over millions of years, radioactive decay causes uranium rock to disperse helium into these chambers. Most of the known helium reserves were discovered by accident.

Shortages of helium have occurred because it cannot be made quickly. While it is the second-most abundant element in the universe (behind hydrogen) and the sun produces about 600 million metric tons each second, the earth’s supply is limited. And once used, the lightweight element escapes into the atmosphere.

The United States has been the largest producer of helium since 1925. Nearly all of our helium comes from underground gas fields between Amarillo, Texas, and Hugoton, Kansas, where a very high concentration, up to 2 percent, named the Federal Helium Reserve, is found. The Federal Helium Reserve was created in the 1960s. This system stores about a third of the world’s helium in crude form in the Cliffside gas field. The porous underground rock spanning portions of Texas, Oklahoma and Kansas holds the gas, which is capped above by calcium anhydrite and on the sides by water. Some speculate that U.S. Federal Helium Reserve may only be able to produce helium until 2025.

Luckily, the United States has other helium resources. Exxon Mobil’s Shute Creek in Wyoming is expected to produce helium and natural gas for an additional 50 or more years, unless government policies targeting oil and gas shut it down. Shute Creek produces about 20 percent of the world’s helium supply.

In 1996, Congress directed the government out of the helium business with the Helium Privatization Act. In 2013, Congress amended the act, switching to selling a portion of the reserve each year to the highest bidder. At the last auction held in August 2018, the average price for crude helium increased 135 percent year-on-year as industrial users increased their stocks for the future. The federal government was supposed to complete the disposal of the Federal Helium System, including the reserve, gas fields, pipeline and infrastructure by September 2021. However, the deadline for the remaining crude helium and assets sale has been extended to September 30, 2022.

Besides the United States, other countries with helium reserves include Qatar, Algeria and Russia. New and expanded liquefied natural gas plants that produce helium as a by-product are expected to begin operation in Qatar and Algeria this year. By the middle of 2021, Russia’s Gazprom is expected to start up its new Amur natural gas processing and helium production facility in Siberia. Production levels of the countries producing helium in 2019 are noted in the graph below. 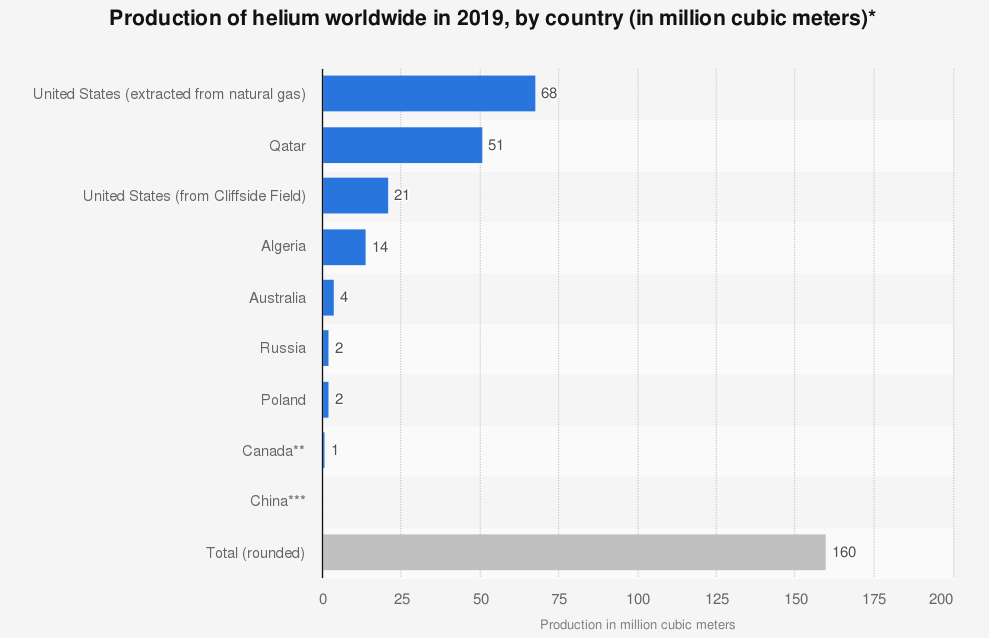 Liquid helium can be expensive and different factors influence its price. One of the factors is the high price of its liquefaction since helium must be cooled to -269 °C. The large amount of energy to accomplish this is expensive. Other factors include the cost of separating the helium from the natural gas and storing the helium, which are time-consuming and difficult processes. The cost of helium increased more than 250 percent between 2010 and 2015. In 2019, a store owner in the UK indicated that the cost of the helium had risen three times in that year—between 8 percent and 10 percent each time. The price of helium varies around the world, depending on location within the supply chain and whether it is in liquid or gaseous form.

Will the U.S. Become a Net Importer of Helium?

Once the Federal Helium Reserve is out of business in the mid-2020’s, the United States will become much more susceptible to foreign supply interruptions and foreign price manipulation and most likely be beholden to Russia for helium imports. This is akin to China’s manipulation of the rare earth mineral market, which it commandeered after environmental regulatory costs made it uneconomic for the United States to remain the major producer of rare earth minerals.

The federal government needs to be cautious in its future decision-making regarding helium or its fate will be the same as with rare earth minerals. Because future new helium supplies will most likely come from the development of federal lands in the West and if Biden’s plan to ban permitting of oil and gas on federal lands is implemented, the United States will become dependent on Russia and a few other nations for its helium supplies. As helium is designated a critical mineral by the federal government, the U.S. Congress and future administrations need to be aware of its importance to American well-being and plan accordingly. Similar to China’s production and processing of rare earth minerals, Qatar and Russia will not worry about environmental correctness as they strive to dominate world helium production and supply.

Advancements in the Science of MRI Equipment

Due to advancements in the medical equipment industry, the need for liquid helium in MRI machines is not as high as it was previously when refills were necessary. Zero boil-off helium magnets such as the Siemens Magnetom Avanto, GE Discovery MR450, GE Optima MR450W or the Toshiba Vantage Elan have increased the period before a helium refill is needed. Zero boil-off helium magnets do not consume helium during the course of normal examinations. However, a refill may be necessary occasionally if minor errors elsewhere in the refrigeration system loses some helium. 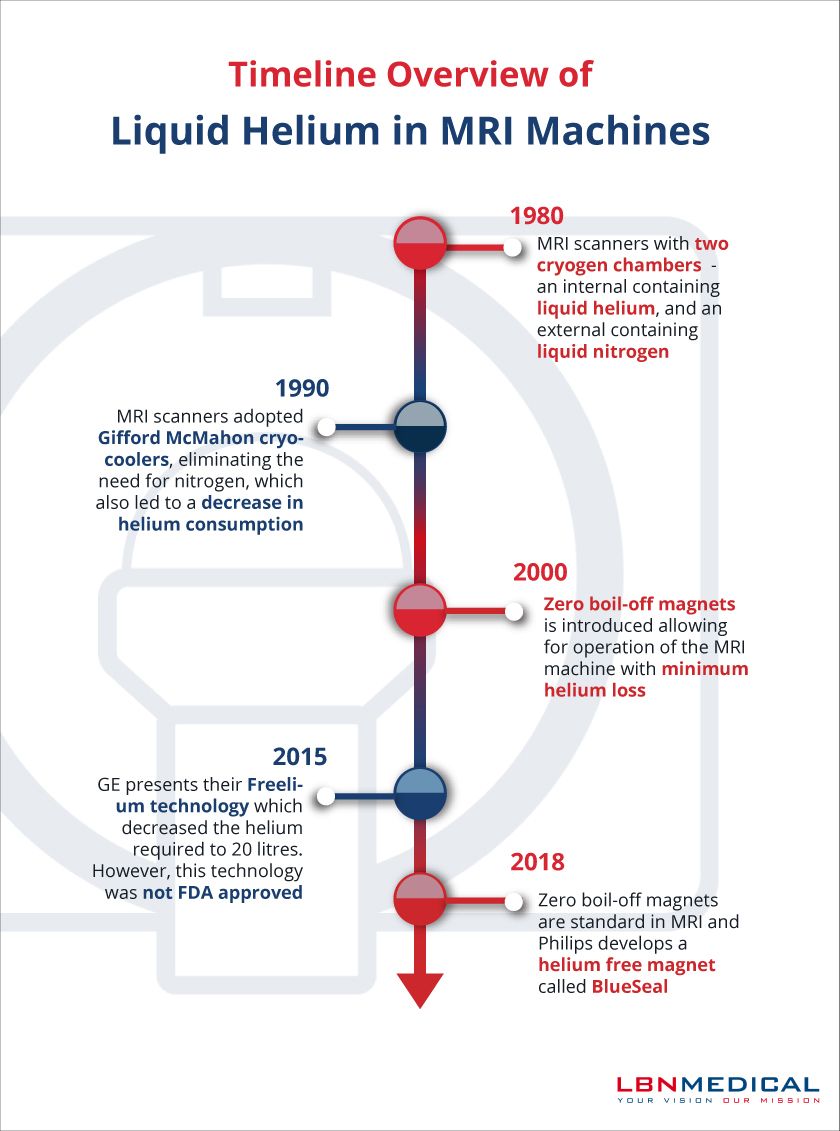 There is no replacement for liquid helium. Helium is unique among all elements for its ability to reach ultra-cold temperatures. It is used in MRI equipment to cool magnets, which, if warmed, will transition to a non-superconducting state and could cause permanent damage. Modern advancements in medical technology have reduced the amount of helium needed for refill.

The United States is currently the leading producer of helium, but other countries are developing processing plants to increase their production, including Russia. As a result of price increases and its limited availability, helium is on the Department of the Interior’s list of elements critical to national security. Efforts to stop oil and gas production in the United States will strain the nation’s ability to meet the need for this critical element in modern medical imaging.