A Natalie Winters expose on the subsidization of a Hunter Biden connected enterprise by Joe Biden and the way the outfit operates shows all that’s wrong today.

Natalie Winters, barely into her 20s, may be the only true investigative reporter left in America and she has uncovered something incredibly revealing about the way in which green energy corporatism operates. Her story is focused on Hunter Biden, his father and the sort of political corruption which they have been involved, but it tells us far more about so much of what is taking place today as Tammany Hall politics invades everything.

The basic story uncovered by Winters and related here is as follows:

A green energy company has received over $10 million in grants from the White House since partnering with a Chinese energy company financially linked to Hunter Biden, the son of the President of the United States.

The carbon capture company, LanzaTech, has received the eight-figure sum since April 2021, when the company announced its partnership with Sinopec Capital.

Finalized in March 2015, the investments from the controversial investment fund led to BHR Partners amassing a nearly 30 percent stake in Sinopec. Hunter reportedly still owns a 10 percent stake in BHR Partners, whose LinkedIn profile highlights its Sinopec investment, revealing it was involved “in the pilot state-owned enterprise reform deal involving the segregation and capitalization of Sinopec Group’s non-oil business into Sinopec Marketing Corporation.”

BHR Partners was a joint venture between Rosemont Seneca Partners, an investment fund founded by Hunter Biden and Obama-era Secretary of State John Kerry’s stepson in 2009, and the state-owned Bank of China. The billion-dollar fund was notoriously birthed less than two weeks after Hunter traveled to China alongside his father and then Vice President.

LanzaTech, which has partnered with other Chinese Communist Party-linked entities, appears to retain close links to Beijing, noting in its financial filings that “the Chinese government may intervene or influence our operations at any time” and that the company may be unable to “protect our interests” in Chinese joint ventures “by nominating a non-Chinese director to the board of directors of any such joint venture.”

Since partnering with Sinopec, it has received over $10 million in federal grants…

Hunter Biden has been the subject of several posts here over the last few years and well before his father occupied the White House. One might suppose the latter event would have made the Bidens a bit more careful about exposing their relationships with Communist China but, of course, true corruption of the Tammany Hall sort is always in your face.

And, when it comes to the green energy corporatism, it’s even more in your face. If you question it you’re treated to a “so what” response as if the participants were entitled to the fringe benefits of the politics and their relationships. LanzaTech, the beneficiary of the Hunter Biden deals with Communist China demonstrates what I’m talking about with this from page 33 of its 2021 Annual Report (highlighting added): 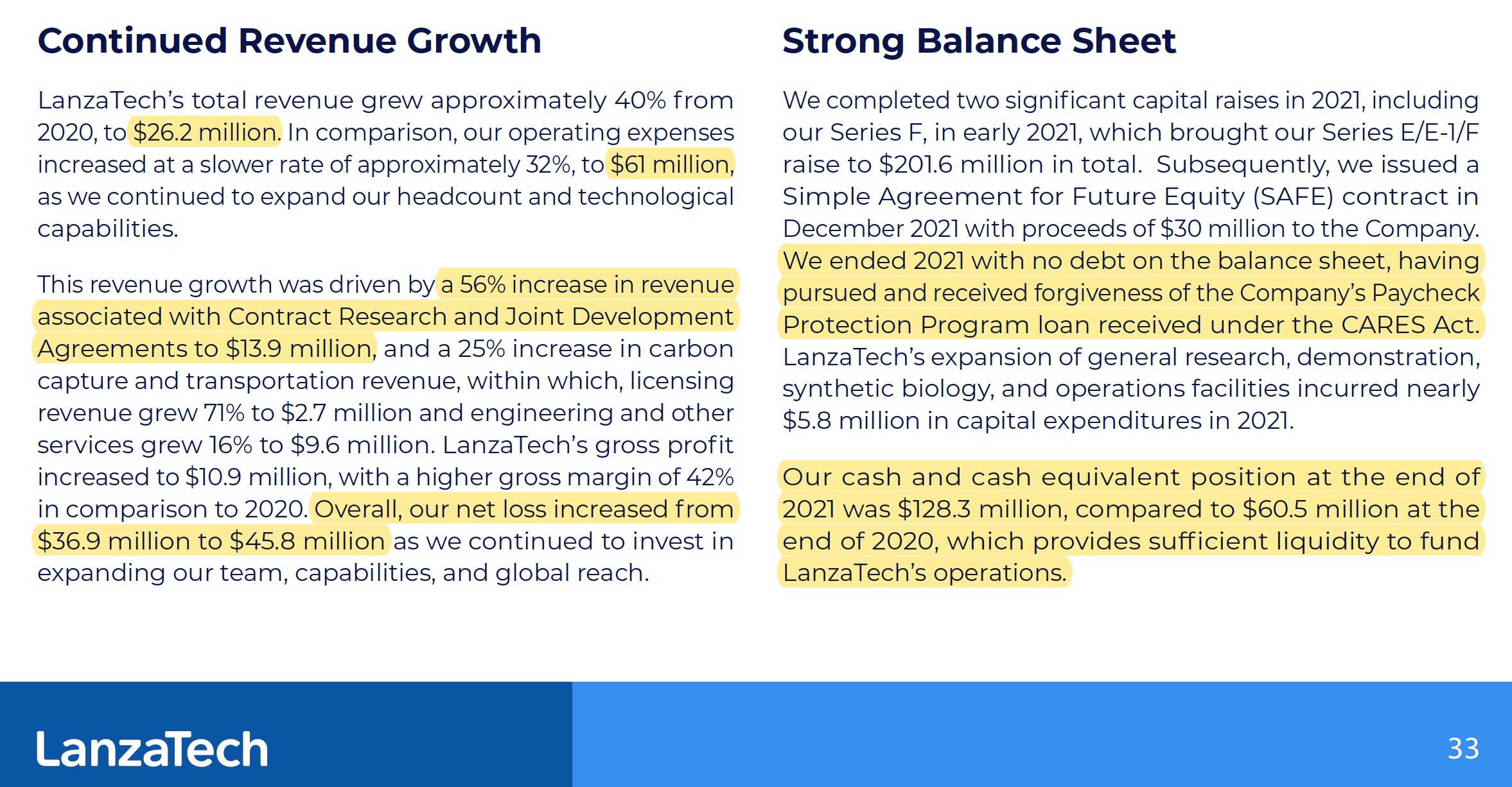 Get that? LanzaTech’s operating expenses were more than twice its revenue! Moreover, there were $9.5 million in Biden Administration grants to LanzaTech in just 2021, which represents more than 36% of the gross revenue it reports for the same year. And, on top of that, the company wiped out its debt using the COVID Paycheck Protection Program. It was a green corporatist bonanza. But, notice the Annual Report includes no other financial data, only politically correct pablum about a “post pollution future.” A perfect piece of propaganda for a snake oil advertising campaign directed at government.

A SEC filing provide more data and indicates the company continued to lose money for the first six months of 2022. Page F-44, in fact, indicates the company’s losses increased from $19.3 million for the first six months of 2021 to $33.1 million for the same period in 2022. Its net loss per common share increased from $20.10 to $24.62. It is burning through cash.

This filing also tells us more about the China relationship (emphasis added):

Political and economic uncertainty, including changes in policies of the Chinese government or relations between China and the United States, may impact us adversely. There is significant uncertainty about the future relationship between China and the United States with respect to trade policy, government relations and treaties. Political uncertainty surrounding Chinese government policies, international trade disputes between China and the United States, and protectionist measures could result in increased trade controls and regulations. Heightened tensions resulting in restrictions and additional regulations may negatively impact our ability to send our microbes and other supplies to our plants in China, to purchase and ship ethanol out of China, or to gain ethanol-related licenses in China.

The implementation of sanctions on certain Chinese individuals or entities may result in complications for our interactions with our joint venture and our joint venture partners in China, or with certain of our strategic investors located in China, including Sinopec Capital Co., Ltd. (“Sinopec”). Sinopec is a Chinese investment platform that was jointly established in 2018 by China Petrochemical Corporation (“Sinopec Group”) and China Petroleum & Chemical Corporation (“Sinopec Corp”). Sinopec Corp is a majority-owned subsidiary of Sinopec Group, which is controlled by the State-owned Assets Supervision and Administration Commission of the State Council of the People’s Republic of China. As a result of potential trade and investment restrictions, we may be unable to complete an investment in any joint venture that we may enter into with Sinopec, or to protect our interests in our existing or potential future joint ventures by nominating a non-Chinese director to the board of directors of any such joint venture…

The Chinese government has exercised and continues to exercise substantial control over every sector of the Chinese economy through regulation and state ownership.

Hunter Biden apparently greased the skids to make this possible, of course. And, then, there is this regarding the dependence of the whole enterprise on grants from his father’s adminstration :

We have sought and may continue to seek to obtain government grants in the future to offset a portion of the costs of our research and development, commercialization and other activities. We cannot be certain that we will be able to secure any such government grants in a timely fashion, or at all. Moreover, any of our existing grants or new grants that we may obtain may be terminated, modified or recovered by the granting governmental body. If such grant funding is discontinued, our revenue and cash received from grants will decrease. If we do not receive grants we are counting on, our liquidity will be impacted, which will impact our ability to grow or maintain our business.

So, there is the ugly full picture of green energy corporatism. It involves sweetheart deals with Communist China, huge grants from taxpayers and virtue signaling propaganda to sell the phony elixir.