Hydraulic Fracturing Equals Energy Security: A Ban Would Be Insane

The Department of Energy just issued a comprehensive report about the dangers of banning hydraulic fracturing in this country. The Executive Summary follows:

Abundant American oil and natural gas reserves are a strategic asset in driving sustained, long-term economic growth, achieving environmental goals, and enhancing the national security interests of the United States. Over the past two decades, due to technological advancements in the combination of horizontal drilling and hydraulic fracturing technology, the United States is now firmly the world’s largest producer of both natural gas and crude oil.

Domestically produced oil and natural gas is an essential component of modern life and all sectors of the United States economy realize the benefits of sustained domestic production, as an October 2020 U.S. Department of Energy report concluded.

American energy leadership rests in the private-sector’s operational freedom to innovate and deploy a range of modern technologies that safely, responsibly, and efficiently extract natural gas and oil hydrocarbons from public and private lands. Hydraulic fracturing and horizontal drilling technology are the most commonly used techniques for oil and natural gas extraction, which, as noted in the October 31 Presidential Memorandum, “are vital not just to our domestic prosperity but also to our national security.”

Since the domestic “shale revolution” began in earnest in 2008, the use of horizontal drilling with high-volume hydraulic fracturing has become highly prevalent – 75 percent of the domestic natural gas and 63 percent of the domestic crude oil produced in 2019 relied on this combination of technologies. Commonly referred to as “unconventional” production, the use of horizontal drilling and hydraulic fracturing technology has enabled oil and natural gas to be economically produced from reservoirs once seen as too unprofitable to develop, resulting in exponential production increases in the nation’s top 10 energy-producing states: Texas, Pennsylvania, Wyoming, Oklahoma, West Virginia, North Dakota, Colorado, Louisiana, New Mexico and Ohio (listed in order of total energy production in British Thermal Units).

Future policies will dictate the direction and extent of American natural gas and oil production, export, and use. The economic and national security consequences of one such potential policy, a United States ban on high-volume hydraulic fracturing technology on any new or existing onshore wells starting in 2021, was assessed at the President’s direction. Such a ban would render the development of unconventional onshore oil and natural gas resources uneconomic, and the drilling of new wells for these resources would effectively cease. 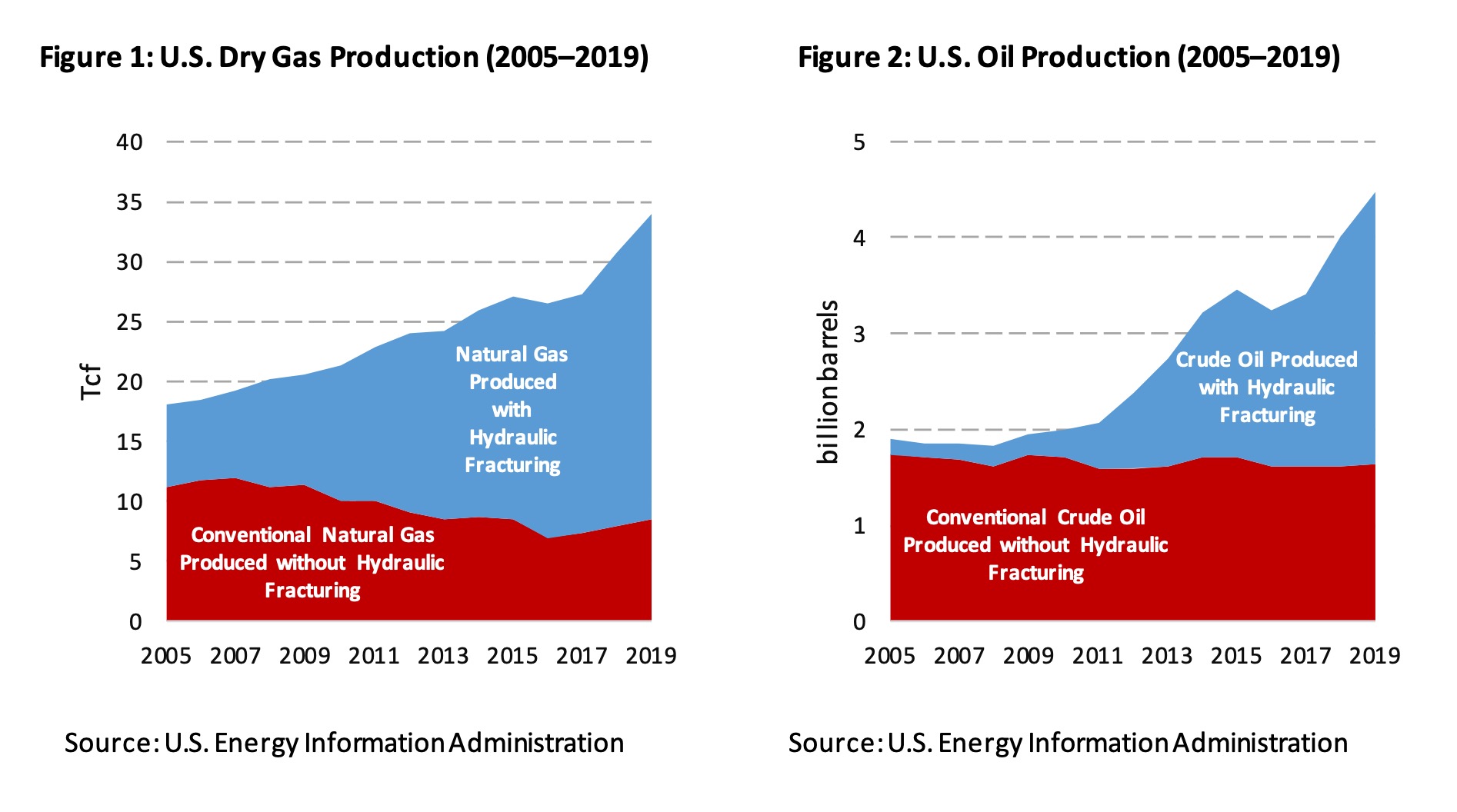 A hydraulic fracturing ban would reverse United States oil and natural gas production growth and return the country to a net-importer of oil and natural gas by 2025. With declining domestic production, the analysis suggests natural gas price implications under a hydraulic fracturing ban would be considerable, with an estimated 244 percent increase from the 2019 level, reaching $8.80 per million British Thermal Units (MMBtu) by 2025.

These price hikes would have a crippling economic effect through increased household energy bills, higher fuel costs for industrial and commercial customers, higher and more frequent electricity price spikes, and deteriorating competitiveness of the United States energy supply in the global market.

The broader economic impact of the hydraulic fracturing ban would be substantial. Compared to a world with hydraulic fracturing, in 2025, the United States economy would have 7.7 million fewer jobs, $1.1 trillion less in gross domestic product (GDP), and $950 billion less in labor income. A hydraulic fracturing ban would result in increases in energy costs for electricity, motor fuels, and natural gas; would burden American families, small businesses, hospitals, manufacturers; would have negative impacts on virtually all other sectors of the economy; and would inevitably stunt the post-pandemic economic recovery.

Furthermore, America’s environment would be worse off without hydraulic fracturing because less natural gas would be available for electricity generation. The U.S. Energy Information Administration (EIA) concluded in a November 2020 note, “U.S. electric power sector emissions have fallen 33 percent from their peak in 2007 because less electricity has been generated from coal and more electricity has been generated from natural gas and non-carbon sources.” Natural gas serves as an important enabler for integrating, low-carbon intermittent renewables like wind and solar.

In the first year of a ban, the country would see a year-over-year increase in carbon dioxide (CO2), nitrogen oxides (NOx), and sulfur dioxide (SO2) emissions with these emissions rising 16 percent, 17 percent, and 62 percent respectively. This outcome undermines the considerable progress the United States power generation sector has made in cutting emissions by 30 percent, 76 percent, and 91 percent respectively for CO2, NOx, and SO2 during the 2005 to 2019 time period.

Eliminating the primary technology responsible for the growth in United States oil and natural gas production would increase natural gas, transportation fuel and electricity prices initiating a ripple effect of severe consequences to the Nation’s economy, environment, and geopolitical standing.