Importance of Natural Gas to Pennsylvania Economy Can’t Be Overstated

The Pennsylvania economy has been driven forward by natural gas development; a fact that can’t be overstated according to a Wells Fargo Securities report.

It is impossible to overstate the positive role of natural gas development on the Pennsylvania economy, according to the Economics Group at Wells Fargo Securities. The report was published last month and has been gaining attention since then. What’s so interesting is the forthrightness and unabashed enthusiasm of the authors for the critical role of natural gas in lifting up the Pennsylvania Economy. The report doesn’t mention it but the contrast with Upstate New York, led by the feckless Governor Corruptocrat and dying on the vine, is quite amazing.

Here is what Wells Fargo had to say about the power of natural gas development with respect to the Pennsylvania economy (emphasis added):

Momentum is building in the Pennsylvania economy. During 2018, statewide real GDP rose 2.1%, the strongest gain in four years. The momentum appears to have carried over into 2019, with real GDP rising at a 2.9% annual rate in Q1, on par with the national average.

The recent upshift is being driven by gains in construction, leisure & hospitality and professional services, which have complemented an upturn in the state’s long-time industry stalwarts—energy and education & healthcare.

During the first quarter, real GDP growth in the state was led by an 18.4% year-over-year surge in the mining, oil & gas industry, which will come as welcome news as it registered a 5.9% decline throughout 2018—the first drop since 2004—alongside lower natural gas prices. Even with some quarterly swings lately, the importance of the natural gas industry to the state economy cannot be overstated. 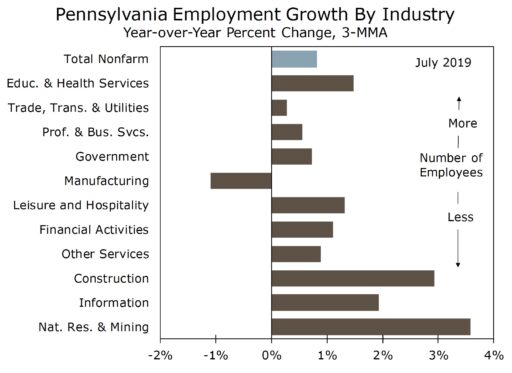 The Marcellus and Utica Shale formations, which primarily sit under Pennsylvania, Ohio, West Virginia and New York, are estimated to have the largest proven natural gas reserves in the nation. This abundance of natural gas supports a wide array of jobs in the state, many of which go beyond the exploration, extraction and refining industries, extending to other sectors such as construction, manufacturing, engineering and other professional support services.

Increased natural gas production has brought with it the need for a more robust energy infrastructure and has led to a surge in heavy and civil engineering construction jobs over the past few years. The pace of employment growth, however, has eased a bit more recently.

Pennsylvania still has thousands of miles of natural gas pipelines under construction, second only to Texas. The Mariner East 2 pipeline, which will carry natural gas liquids from western Pennsylvania to a processing and export facility near Philadelphia, has faced some delays recently but is a shining example of the ongoing energy infrastructure buildout.

Furthermore, the massive 400-acre Shell ethane cracker in Beaver County just outside of Pittsburgh is currently at “peak-construction” and employs roughly 6,000 construction workers. Given the sheer volume of natural gas being extracted, it would not be surprising to see other large ethane cracker plants, which convert petrochemicals to consumer plastics, sprout up in the area.

Surging natural gas production only adds to the state’s wealth of energy resources and has made Pennsylvania one of the nation’s top electricity exporters.

It doesn’t get much better than this, folks. Meanwhile, in Upstate New York…