Indian Point Situation – Even Worse Than I Thought!

[Editor Comment: Something truly amazing has been revealed about Indian Point; the industrial sized renewable farms that are to replace it aren’t even making power for us!]

In April 2017 Governor Cuomo announced the closure of the Indian Point Energy Center by April 2021 and last week I updated my analysis of the effect on New York’s energy grid.  Robert Bryce, writing on the Real Clear Energy blog recently wrote about an aspect of New York wind development that I did not know about that is important relative to the replacement of Indian Point power.

In my previous blog post I noted that there has been no renewable capacity added since the announcement that Indian Point would be closed.  I believe that is a result of detailed permitting requirements that include environmental and public health impact analyses, studies regarding environmental justice and public safety, and consideration of local laws. I concluded that in the past 12 months wind projects totaling nearly 1,300 MW have been permitted and will show up as power that I presumed could be claimed for use as replacement for Indian Point.

Mr. Bryce notes that siting renewable energy projects is precipitating land-use battles that are not only about property rights and home rule but also devolve into issues with geography and class.  What was news to me was that he explains how New York is becoming “a wind-energy plantation for New England” with massive projects proposed in the state’s poorest counties.  In particular, he describes one project:

“The 126-megawatt Cassadaga Wind Project is now being built in Chautauqua County, New York’s westernmost county. The project includes 37 turbines, each standing about 500 feet high, spread over 40,000 acres (62 square miles). The project is owned by Innogy, a subsidiary of the Essen, German-based utility E.On.” 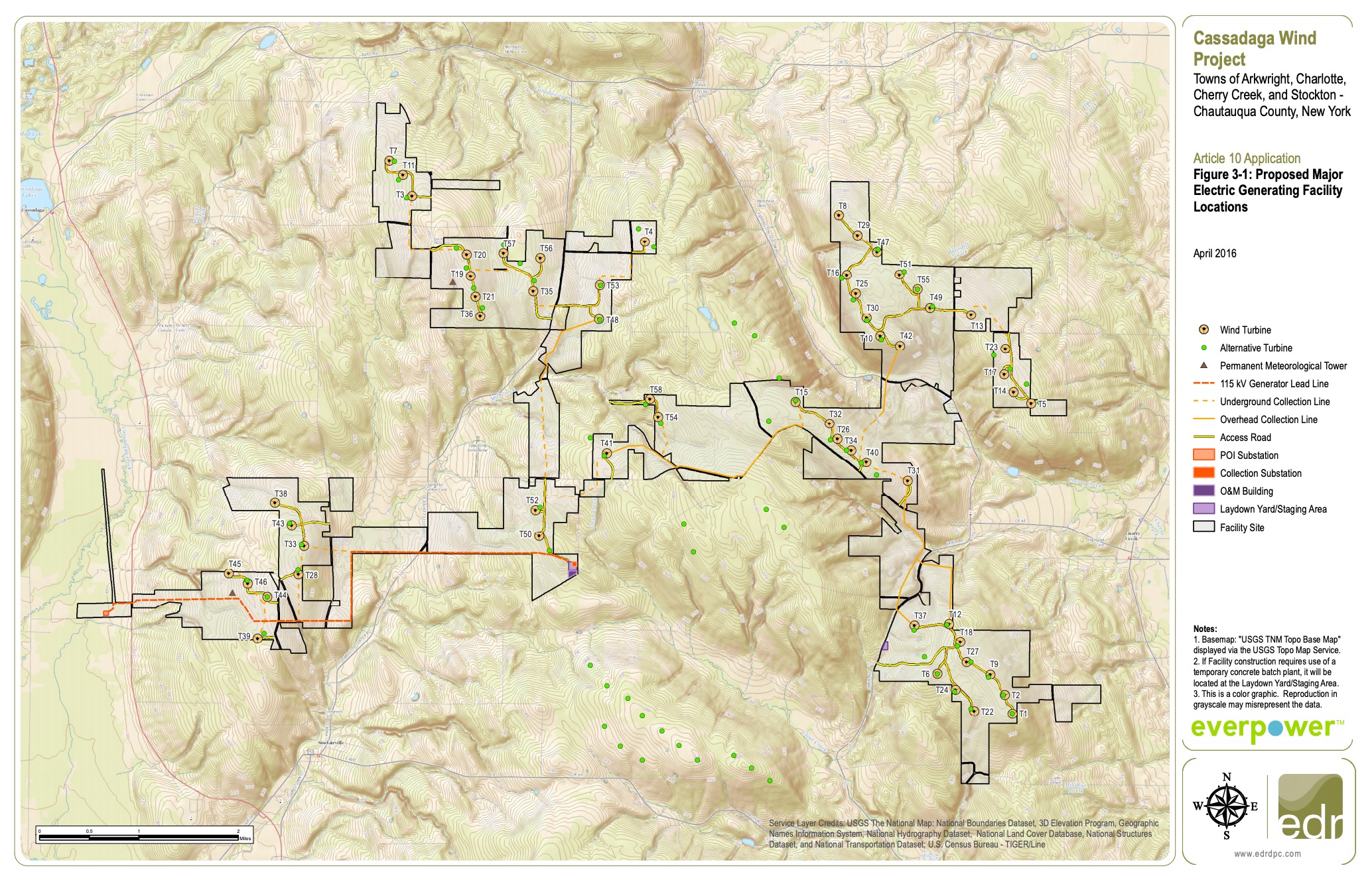 On January 18, 2018 the New York Department of Public Service published the Order Granting Certificate of Environmental Compatibility and Public Need, With Conditions which approves the application to build the facility.  Buried in this document is the following: “the output of the Facility is contracted for out-of-state purchase”.  Mr. Bryce explains that generation will be credited toward renewable goals in Massachusetts, Connecticut and Rhode Island.  He notes that in an email:

“a spokesperson for Innogy confirmed that the buyer of the power to be produced by Cassadaga ‘is a group of seven New England utilities procured through the New England Clean Energy request for proposals’ in 2016. How will the juice from New York get to New England? It won’t. Instead, the Innogy spokesperson told me that the energy produced by the turbines at Cassadaga ‘will be used to serve local energy requirements in areas surrounding the project. Export to areas outside New York would require dedicated point-to-point transmission lines’.”

As a result, the Cassadaga Wind Farm cannot be considered as part of the renewable energy that will replace the emissions-free energy produced by Indian Point.

Mr. Bryce also reviewed data published by the Department of Energy and the New England Power Pool to look the overall picture.  He found that “of the nearly 4 million megawatt-hours of wind energy produced in New York in 2018, the state exported 1.2 million megawatt-hours, or 30 percent, to New England. When the Cassadaga wind project begins operating, it will likely add another 364,000 megawatt-hours per year in renewable-energy credits to that export total.”  That means even existing renewables are unavailable to replace Indian Point electric energy.

In April 2020, Governor Cuomo initiated and rammed through the legislature the Accelerated Renewable Energy Growth and Community Benefit Act (AREGCBA) as part of the 2020-21 state budget.  This legislation is intended to ensure that renewable generation is sited in a “timely and cost-effective manner”.  It does this by preventing local communities to enact rules on renewable energy facilities or prevent them from being built.

The so-called “community benefit” portion of this provides a  Host Community Benefit that “can take the form of a bill discount or credit, or a compensatory or environmental benefit for the impacted electric utility customers”.  In my opinion, this means that the State will provide hush money payoffs to bribe those customers in the community where the renewable energy is being proposed who are not directly impacted by the renewable development to override the rights of community members who are directly impacted.

I am troubled by the entire paragraph in the Cassadaga permit application approval Order Granting Certificate of Environmental Compatibility and Public Need, With Conditions that notes that the output of the facility will be credited out-of-state:

“As the Examiners demonstrated, the goals of the State Energy Plan are not restricted to renewable electricity consumed within the state, but are also oriented toward national and international goals of reducing carbon and transforming the energy industry. For that reason, the Examiners’ finding was not changed by the fact that the output of the Facility is contracted for out-of-state purchase. This conclusion is bolstered by the decision of the Appellate Decision in a previous Article X proceeding that production of electricity within the state is beneficial irrespective of the contract path of the output. No party took exception to the RD’s proposed findings and determinations on this issue, and we adopt them.”

As egregious as the community benefit payola scam is, the thought that the rationale used to justify renewable energy development, even if the power is not to be used in New York, could lead to a situation where the community benefit payments are paid by New York ratepayers for facilities that benefit out-of-state interests is mind-blowing.  My biggest concern about New York’s aspirational climate targets is the cost so adding costs to New Yorkers for projects that will not help meet those targets is completely unacceptable.

With respect to Indian Point replacement power, the fact that there are New York renewable facilities that should not be counted towards replacement underscores the short-sighted innumerate decision for closure.  The closure of Indian Point was not coordinated with implementation of renewable energy to replace it.  It is not clear how many renewable energy facilities operate this way because the wind energy owners consider it business confidential so the numbers are not readily available.  Finally, note that the lack of transparency also means that it is entirely possible that the renewable energy credits are being double-counted with more than one jurisdiction claiming the benefits.