Irish Fracking Blarney Shows Why the West Is Dying

Irish Fracking Blarney Shows Why the West Is Dying

Ray Kemble has gone to Ireland to oppose a LNG terminal, Irish fracking and everything natural gas. Who’s paying him to offer up his baseless assertions?

Imagine my surprise to learn from my good friend Jim Willis this morning that Ray Kemble has taken his schtick across the pond to the land of Éire. I shouldn’t have been surprised, though; blarney is a feature, not a bug, of Irish life, which is what I always tell my Irish friends and Irish wife. St.Patrick had his hands full with them, after all, and, like other Englishmen, could never quite straighten them out even though they came to claim him as one of their own. Ray was there on someone’s behalf to fight Irish fracking, US fracking and fracking everywhere it seems, making the same spectacular claims he’s always made on behalf of Food & Water Watch and other fractivist friends with a wallet. His presence in Ireland, after all these years of embarrassing shilling for those fractivist friends tells us much more about us than him.

By us, I mean to say Western Civilization. It’s dying faster every day, I’m sad to conclude. Ray is an indication that we are no longer capable of having an honest debate. Ray is not in Ireland to offer facts or rational argument. Rather, he’s there on someone else’s tab to make wild claims that will support the equally wild contention of special interest groups that “fracked gas” is somehow a danger: a contention that serves to advance the cause of green grifters, socialists and Great Reset types such as Klaus Schwab.

It is pointless to argue with Ray. He thrives on blarney and arguing will only bring forth more of it. It’s entertaining but not harmless. He talked a lot about cancer on his trip and I’m sympathetic to that because that’s something we have had in common, but when he throws out talk about cancer clusters and rates in Susquehanna County it should suffice to note the following cancer statistics from the Pennsylvania Department of Health: 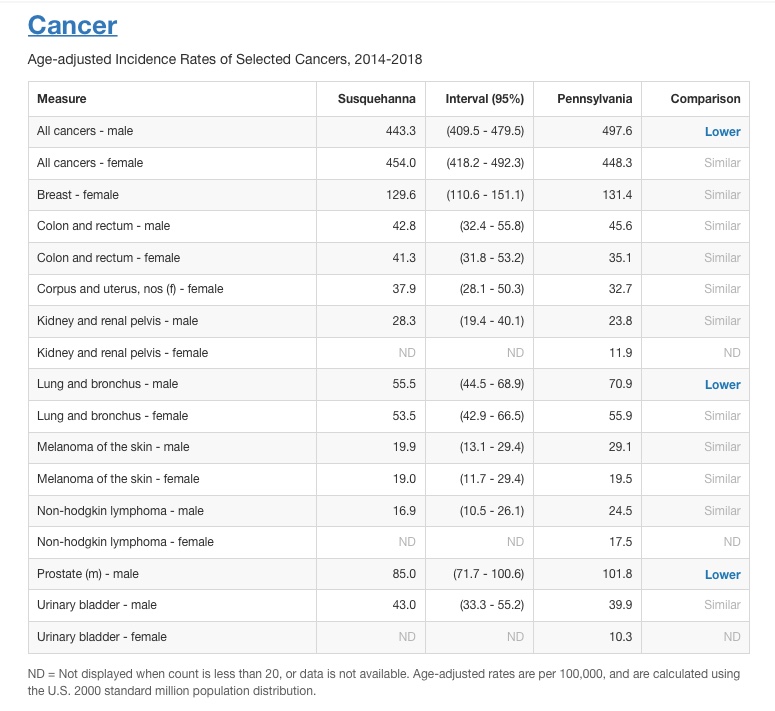 Cancer rates in Susquehanna County are, across the board, lower or similar to the rest of Commonwealth. So much for that. The Irish have nothing to fear from Irish fracking except the fact that, because they’ve banned it, they’re made Ireland captive to others, including Russia for the natural gas they must have. They desperately need the gas because green energy, despite its obvious appeal to an Emerald Isle, is a joke. It is non-dispatchable, requires huge subsidies, completely distorts the energy system, making all sources of energy more expensive in the end and has made all of Europe horribly dependent on Vladimir Putin. The lessons of the German Energiewende are clear.

Yet, with the all evidence staring Ireland in the face like a flashing fluorescent green light, the Irish Mirror chooses to parrot Ray Kemble. It presents him, not as the shill for some special interest, but, rather, as victim of fracking, serving up one unsubstantiated assertion after another as Irish citizens suffer from extraordinarily high natural gas and electricity prices. The ostensible purpose is opposition to a LNG terminal that will help ensure Ireland’s future energy security. It’s based on the falsehood that “fracked gas” from the US will somehow deprive the Irish, like Superman, of their powers.

What the Irish Mirror ought to be focusing on is why some group is paying for Ray Kemble’s trip to oppose a LNG terminal that will just happen to bring natural gas from Pennsylvania to Ireland to save its butt down the road when the current energy crisis just gets worse. Could it be that Ray is just there to interfere with the development of the LNG outlets here, not there? Of course. It’s not about Ireland at all. Rather, its about smothering the natural gas industry here to serve the goals of power and money-thirsty green grifters and great resetters.

This is the prevailing pattern in the West today. The ideologues and the clowns are nothing but useful idiots in the real cause, which is ever more power and money for elites. We are experiencing levels of corruption we’ve never seen before, in fact. We have separated into two societies—elites versus the citizenry—and the former are demanding control and determined to suppress the latter and replace it with a soft version of slavery. They are showing us they will stop at nothing. They are creating a police state as they have demonstrated twice in the last few days by turning the FBI into the Stasi and creating an army of IRS brownshirts.  They would be pleased to turn the US into Venezuela, because it won’t effect them other than to separate us out and elevate their own position.

Think I’m overreacting? Read history. Civilizations survive wars but they don’t survive corruption and what’s in this tiny little example illustrates how its seeped into everything, taken advantage of people such as Ray Kemble and made servants out of ideologues ad journalists who thought they were doing good work but were really serving dirty rotten scoundrels.