For the first time in American history, the U.S. Interior Department has allowed the existing Outer Continental Shelf 5-year offshore leasing program to expire without having a new plan in place. In fact, the expiration date came and went without even a draft proposal ready for public and congressional review due to an “unexpected” delay. Reuters reported:

“Interior Department Secretary Deb Haaland in May had vowed to unveil the draft proposal ahead of the June 30 expiration of the current plan. … Briefings with officials meant to take place Thursday ahead of a public announcement were unexpectedly delayed, according to sources. The reason and length of the delay were unclear.”

By missing yesterday’s deadline, the Biden administration has brought even more uncertainty to the U.S. oil and natural gas industry, which it has hammered with mixed messages amid record high gasoline prices.

Here’s what you should know:

Interior Doesn’t Even a Draft Prepared

Since Congress amended the Outer Continental Shelf Land’s Act in 1978, the 5-year plan has always been finalized ahead of June 30.

This year, however, not only has Interior failed to put a new plan in place, it also hasn’t even published a draft of its “Proposed Program,” despite President Biden being in office for nearly 18 months and Interior’s press release on May 19 stating it would “release the Proposed Program – the next step in the five-year offshore energy planning process – by June 30, 2022, which is the expiration of the current program.”

It puts the offshore leasing program months behind schedule as the draft requires months of congressional review and public input, as the law firm Holland & Knight explained in a blog:

“The five-year plan requires public input and congressional review. As a result, the earliest a new five-year plan can be in place is November or December 2022, making it entirely possible that 2022 will be the first year since 1958 that no new offshore leases will be offered by Interior.”

Unfortunately, the most likely scenario is that it will be well into 2023 or even 2024 before a sale can take place, according to BOEM’s timelines for the program planning and lease sale processes. 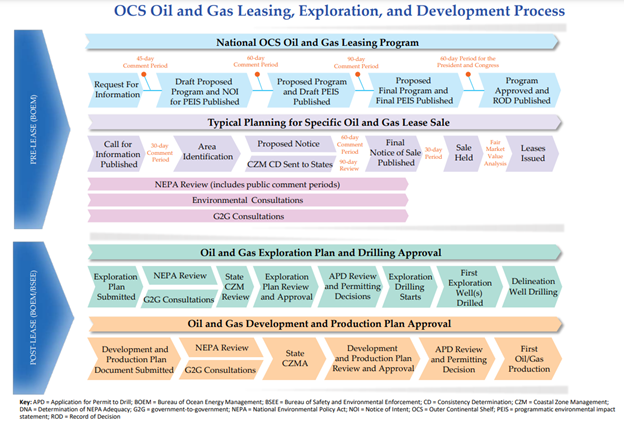 It’s “Early Summer” All Over Again

This is becoming par for the course at Interior. Recall in May 2021 when Secretary Haaland repeatedly stated that Interior would release its draft review of the federal leasing program by “early summer.”

Unfortunately, “early summer” extended all the way until the day after Thanksgiving when Interior finally published the leasing review that did next to nothing to ease uncertainty or high energy prices.

Are we facing another “early summer” in 2022? Will Interior delay the offshore leasing plan until next week? Next month? Or even November?

The New Plan Might Not Even Propose Lease Sales

Even when Interior releases the draft plan, there is no guarantee that lease sales will even be proposed. In the same May 19 press release where Interior pledged to have the draft ready by June 30, it also clearly stated:

“A Proposed Program is not a decision to issue specific leases or to authorize any drilling or development.”

That press release, issued while Secretary Haaland was testifying before the Senate Energy & Natural Resources Committee, appeared to catch the secretary by surprise. Chairman Joe Manchin (D-W.V.) reacted to the announcement during the hearing, saying:

“It looks like y’all are going to shut everything down. Did you know you all put this out? … My God somebody, this shuts it down. This shows what your intent is.”

“Shut everything down” is certainly the agenda of a certain group of Democratic senators, who just this week wrote to Secretary Haaland requesting that the new five-year plan not include lease sales. As Energy In Depth observed, an offshore plan without lease sales would be like ordering a cheeseburger but requesting it without the meat, cheese, and bread.

Even during the first 18 months of the Biden administration, with the current five-year program in place, Interior wasn’t holding offshore lease sales because of its illegal ban on federal leases sales.

In fact an offshore lease sale hasn’t occurred since 2020, with the exception of Gulf of Mexico Sale 257, which was ultimately vacated by a judge in 2022 – a decision the Justice Department didn’t appeal. Interior also cancelled the three remaining sales (258, 259 and 261) from the program that expired yesterday.

American energy security, good-paying jobs for workers, and billions of dollars in revenue are all at stake without offshore lease sales. If lease sales can move forward, the Gulf of Mexico is projected to produce an average of 2.6 million barrels per day of oil and natural gas from 2022 to 2040, according to a study from the American Petroleum Institute and the National Ocean Industries Association.

However, that same study shows that if the program is delayed, it could mean nearly 500,000 barrels per day less over that time period. By 2036, that lost production could mean 885,000 fewer barrels of oil per day, a 33 percent decrease of where production could have been if there was a 5-year offshore leasing program in place by the time the 2017-2022 program expires.

Further, offshore production in the Gulf of Mexico supports 370,000 well-paid American jobs, and without a leasing plan in place, 60,000 of those could be lost, putting not just livelihoods at jeopardy, but a major driver of economic growth along the Gulf Coast.

“Under the Great American Outdoors Act (GAOA), our industry almost exclusively funds the $2.8 billion annually provided for infrastructure in national parks, wildlife refuges, and other public lands. GAOA established a new National Park and Public Lands Legacy Restoration Fund while permanently funding the popular Land and Water Conservation Fund. The former receives over 90 percent of its funding from onshore oil and natural gas production and the latter receives 100 percent from offshore production.”

Not offering lease sales does not only impact oil and gas production, it can hamper renewable energy production as well. Offshore drilling and offshore wind development are symbiotic. Much of the expertise- engineers, workers and technicians- that develop offshore oil and gas are also equipped to work on offshore wind projects. The two industries share infrastructure and supply chain needs, allowing one industry to dwindle while the other is not yet ready to take on the load will have rippling effects. Without a leasing plan there is no investment, without investments there is no workforce, and no infrastructure left for renewables.

“The offshore oil and gas industry and the infrastructure required to support it – including ports, roads, highly specialized vessels, skilled mariners and associated supply chains – are vital to the success of any domestic offshore wind or other renewable energy business. The technologies and services needed to support offshore renewable projects may not be economically viable on their own. They will need the existing offshore energy economy to sustain them until fledgling industries such as offshore wind is more widespread and mature.”