John Fetterman: Another Spoiled Trustfunder with A Schtick

John Fetterman: Another Spoiled Trustfunder with A Schtick

John Fetterman is a total phony, a Harvard trained trust-funder born out of the insurance industry whose schtick is having been a powerless mayor of dying town.

John Fetterman is an intriguing character until you learn who he really is. He’s our Lieutenant Governor in Pennsylvania right now and also the Democrat nominee for U.S. Senate. He’s flooded with campaign money from uber-rich elites who want nothing more than to put the common man under their thumbs. Ironically, but intentionally, he has orchestrated his political rise using the schtick of being an edgy street-fighting advocate for the very same blue-collar folks.

The truth is that John Fetterman is pulling a classic con. He’s no friend of the common man, no friend of freedom and no friend of Pennsylvania. No, he’s just another trust-funder burdened by guilt at having done so undeservedly well and aiming to make his own mark without giving anything up. Moreover, he’s doing it the time-honored trust-funder way; by attacking everything that made his success possible.

The John Fetterman schtick is one of rejection, an “occupy” sort of image, complete with a a rebel hoodie, strange tattoos, strange beard, shaved head and everything else intended to turn his bulky frame into a marketable asset. His ads proclaim he only got into politics to “save his town” of Braddock, Pennsylvania where he served as mayor from 2006 to 2019. They also say he “rebuilt the town.”

It’s all key to cultivating his blue-collar image. But, John Fetterman did not rebuild or save Braddock. Moreover, being mayor in a Pennsylvania town of less than 2,000 people is akin to being the local Rotary Club Sergeant at Arms. That’s because Pennsylvania Borough mayors are powerless to do anything but marry people, provide oversight of tiny police departments and break very rare Borough Council tie votes.

No, John Fetterman simply used Braddock Borough to attract attention to himself as its colorful mayor, a meaningless job he initially won by one provisional ballot vote. He did nothing to rebuild Braddock, in fact. Four years after he was elected mayor it had 1,086 housing units, only 823 of which were occupied. A decade later and only one year after he left office, the numbers had dropped to 1,011 and 777, respectively, meaning Fetterman presided over one demolition after another with no real rebuilding whatsoever. Braddock merely continued shrinking. This decline is, naturally, further reflected in population trends. The following population graph illustrates: 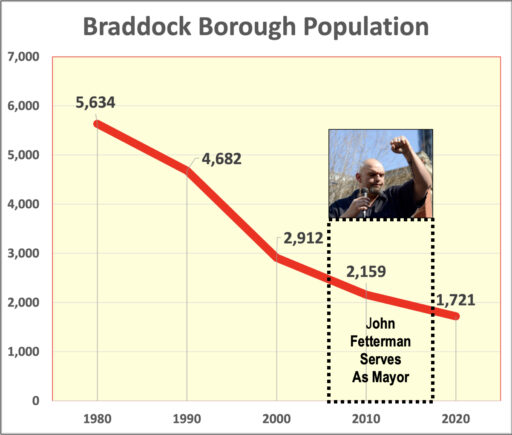 Yes, the population of Braddock declined by another 28% or roughly 700 people over the course of John Fetterman’s experience as mayor. That experience was essentially one fiasco after another as he did little or nothing to oversee the police, according to borough Council members who were none too happy with his antics. He also “didn’t attend Council meetings.” with any regularity, it appears, and even passed off his limited police oversight responsibilities to the police chief.

Meanwhile, this is what happened with the crime rate (per 100,000 persons) during John Fetterman’s playtime as mayor of Braddock. Murders and other violent crime went down for a time but then rose again: 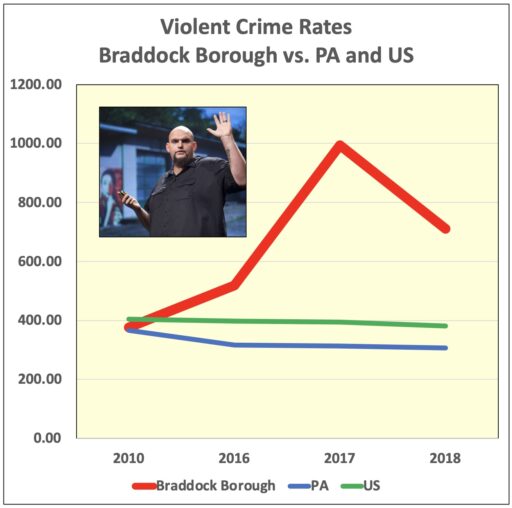 John Fetterman fans like to suggest crime came under control while he was mayor, but the facts tell a quite different story, as the chart indicates. Perhaps he should have actually supervised the police, as Borough Council had hoped he would do.

Members of the Borough Council attempted, in fact, to have John Fetterman removed and arrested in 2009 “after he criticized a political opponent while delivering his mayoral report.” Here’s a small sampling of other incidents involving him, all of which appear to have been part of his bad boy schtick:

More bizarre even than these incidents, though, are some of the positions John Fetterman has taken:

John Fetterman, in other words, is a pure across-the-board radical. Worse, and undoubtedly the reason he is so extreme, is that he is a classic trust-funder. His father built an insurance empire and sent him to Harvard. Other than a short stint working for Daddy, and his job as Lieutenant Governor, he’s never had a real job, depending on what may well have been tax-free income from his parents and favors from his sister to feed his family and do his schtick.

Fetterman attacks his opponent for having multiple homes but the latter earned the money to acquire those assets. John Fetterman’s home was given him by his sister. He’s never earned anything the old-fashioned way. He has been a self-promoter from the very beginning and the schtick he uses to do so is a hoodie, a bunch of attention-getting tattoos and a weird boldness he knows will sell with every lefty media outfit out there. The phony Fetterman schtick shields him from the fact he’s was a meaningless official in a tiny town living off inherited wealth so he could con everyone out of a Senate seat.

John Fetterman, to summarize, has never rebuilt anything and is no friend of anyone but himself. He’s a dangerous extremist who, with Bernie Sanders at his side, would replicate the House’s Squad in the Senate. He would continue to ally himself with the Heinz Endowments (yes, they funded him, too, through an entity he created called Braddock Redux) to destroy natural gas and oil, suppress our freedom and help turn Pennsylvania into the equivalent of a Third World country. He’s dangerous in the extreme and must to be defeated. Don’t buy the schtick; this man is a chameleon through and through.