[Editor’s Note: Josh Shapiro wasted no time selling out the trade union members and other blue collar workers who voted for him by siding with the anti-gas gentry ruling class.]

Yeah, well, that didn’t take long, did it? Pennsylvania Governor-elect Josh Shapiro, just a few days after he won the election, has vowed to further restrict fracking with huge new setback regulations. He’s also promising new regulations for gathering pipelines. In other words, he’s about to screw over the Marcellus industry and pretty much stop new drilling in the state. Still glad you voted for Josh Shapiro? 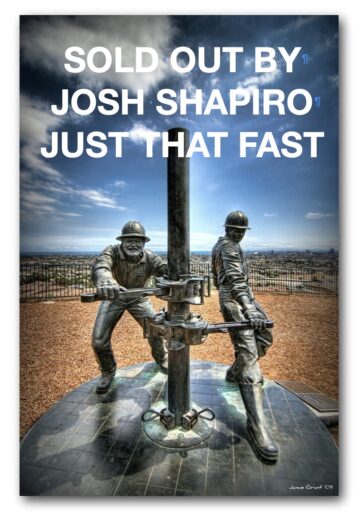 As we’ve pointed out in other posts, the biggest winners from PA’s election last Tuesday will be West Virginia and Ohio, where the governors and regulators like and welcome fracking and the shale industry. Josh Shapiro wants to block new shale drilling in the state. That is his aim. We told you that during the election, and you didn’t believe us. Maybe you will now. Except it’s too late. You’re now screwed for the next four years as this story shows.

Sometimes reality comes at you hard.

Governor-elect Josh Shapiro announced he is ready to restrict fracking and energy development in Pennsylvania following his win on Tuesday.

According to Jeff Flock on FOX Business Network, Shapiro is going to crack down on the state’s vibrant energy sector.

Shapiro now says he supports the recommendations from the state’s investigation that includes:

According to Jeff Flock there are 500,000 jobs in Pennsylvania linked to the oil sector producing $800 billion to the economy. (That number seems a high)

A 2020 study found that a fracking ban would increase annual household energy costs by over $600 per year.

And, here’s the story on Josh Shapiro’s quick sellout of his friends, courtesy of Fox Business News: