Katie Muth, AP and the AG in Dimock? What’s This About?

Katie Muth the Karpetbagger Ventures Into Dimock. Why?

Why was Katie Muth, State Senator for some Philly suburbs, at a Dimock Township meeting last year, trying to gin up controversy in Senator Yaw’s district?

Yes, Katie Muth showed up at Dimock Township, Susquehanna County, in May of last year. She’s an ambitious State Senator serving parts of Berks, Chester and Montgomery Counties who has demagogued the Mariner East pipeline project ad infinitum. As despicable as that has been, it is also her backyard so it’s at least understandable. But Dimock? Strange.

Next, the Attorney General who desperately wants to be Governor—Josh Shapiro— decided he wanted in on the act and began a criminal investigation related to drilling, Then, last month, Mike Rubinkam of the Activist Press (AP) writes a heavily biased and misleading article that profiles Ray Kemble, the water bottle shooting expert. Then, Scott Perry, the DEP oil and gas chief suddenly disappears. Something devious is underway.

What’s the game this time? Well, let’s start with what happened last year when Katie Muth the Karpetbagger suddenly showed up at a Dimock Township meeting 10 months ago, as reported in the Susquehanna Independent:

According to an informational packet distributed by Eureka Monday night, the Dimock facility will mirror the company’s Standing Stone facility in Bradford County.  According to the brochure, the Dimock facility, if approved, will produce 94,000 barrels of treated water a day, 30 to 40 tons of sodium chloride to be trucked to the Standing Stone site a day and 23,000 gallons of concentrated calcium chloride brine per day.   The treated water would then be resold for “purposes both inside and outside the oil and gas industry including industrial applications, agriculture, habitat restoration and surface water body supplementation…

State Sen. Katie Muth (D-44), who attended Monday’s meeting, cautioned the term “non-hazardous” could be misleading as residents in the area of the Belle Vernon landfill in western Pennsylvania have complained of health problem and poisonous material leaching from that landfill into the nearby Monongahela

“There’s no mandate to test that water,” noted Muth, a member of the senate environmental resources and energy committee and who represents parts of Berks, Chester and Montgomery Counties, pointing out what she described as a legal loophole in the landfill’s designation.

Company officials continued to maintain that the treated water released from their facilities, namely the one at Standing Stone, far exceeds any state Department of Environmental Protection standards for clean water.

“A majority of what we measure in our effluent at Standing Stone is not even detectable by analytical methodology,” said vice president of engineering Jerel Bogdan.

Putting aside Katie Muth’s obvious lack of knowledge on the subject, as evidenced by her incoherent comments, what was she doing there, more than 100 miles outside her district? Who coordinated all this and why? What is it just another Katie kaper?

AG Shapiro is easier to understand. He apparently imagines he’ll get suburban plaudits for fighting gas in his quest for power as governor. I suspect this a mistake on the order of suing the Little Sisters of the Poor, which Shapiro somehow also thought was smart, but I digress. Still, there are so many questions about this latest case of the empire striking back, questions such as these:

The answers to these questions are not entirely clear, but it’s more than obvious there is something foul at play and it has nothing to do with water. Take, for example, the picture employed in Rubinkam’s AP trash job on the industry. Here is the relevant part of the photo to which I’ve added an arrow: 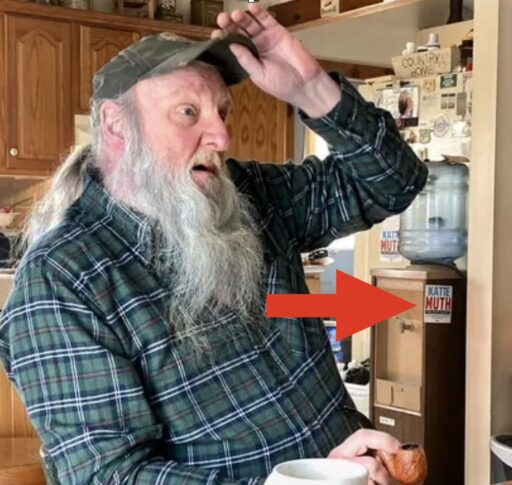 Notice the Katie Muth sticker on the cabinet? Are we to believe the photographer just happened to feature that prominently in his shot? For an article in the Philadelphia Inquirer that circulates widely in her district?

Notice, too, how Rubinkam makes makes one unstantiated assertion after another, as if the premise that Ray Kemble’s water was and continues to be dangerously polluted was beyond challenge. But, it was Rubinkam himself who, quite some time ago, inadvertently exposed the fact Kemble’s water was not dangerously polluted. He published an AP article trying to make hay out of ATSDR testing of Dimock wells and drew attention to the facts test results had been issued. A quick search by this writer of Bill Huston’s Blog revealed its namesake had published Ray Kemble’s data for public consumption.

The data, in fact, showed Ray’s water had somewhat high levels of turbidity and manganese (obviously from not being used regularly) and methane (common to the Dimock area water from time immemorial) was but 2.03 to 3.1 mg/L, way below the warning level of 10 mg/L.

Rubinkam has to know all this but he persists in perpetuating a myth almost no one cares about anymore. Why? It appears it could be because it helps Katie Muth and Josh Shapiro, two extremely demagogic power-seekers who are attempting to resurrect a long-dead issue for political leverage.