Southeast PA State Senator Katie Muth wanted to speak for Dimock, lost at the Environmental Hearing Board, her attorney was sanctioned and she persists in suing.

This case is so bizarre, one wonders if we have not been transported back to 1956 and are watching “To Tell the Truth” and waiting to see if there’s another Katie Muth who will step up at the end and tell us everything else we’ve heard was just an act. Sadly, that’s not the case. Readers may recall some posts I did a while back on State Senator Katie Muth  who had, for some peculiar reason, started worrying about Dimock, which is about as far from her Southeast Pennsylvania district as one can get in Pennsylvania. She had sued to frustrate the plans of Eureka Resources, LLC to recycle wastewater generated by Coterra Energy under a DEP permit and filed a challenge with the Environmental Hearing Board. It all went both predictably and unpredictably awry.

The Pennsylvania Environmental Hearing Board (a special court in Pennsylvania set up to deal with environmental matters) heard the case. The predictable part was that her case went nowhere. She was bringing it as a single Senator from a district far away. The EHB told here that wouldn’t work, although it did give her the remote possibility of a way back to the court if she could show she was personally impacted separate from her role as a lone legislator riding far afield from the area she was elected to represent.

The unpredictable part of the case relates to the fact Katie Muth used an obscure lawyer from still another corner of Pennsylvania to represent her. That attorney, Lisa Johnson, ended up being sanctioned by the EHB in another case for “egregious behavior unmistakably evincing bad faith, harassment, unwarranted delaying tactics, and outright lying to the Board and opposing counsel, not to mention highly disrespectful, unprofessional conduct in general.”

If you thought the EHB’s dismissal of Senator Katie Muth’s case and sanctioning of her attorney would lead to her quietly dropping the matter, you were wrong. It continues with Katie Muth trying to establish her personal bona fides as a plaintiff, which has now brought forth some absolutely ludicrous arguments and an official ethics complaint against here. The  complaint, which alleges the Senator is “receiving state funds (reimbursements) for a personal matter” is offered below: 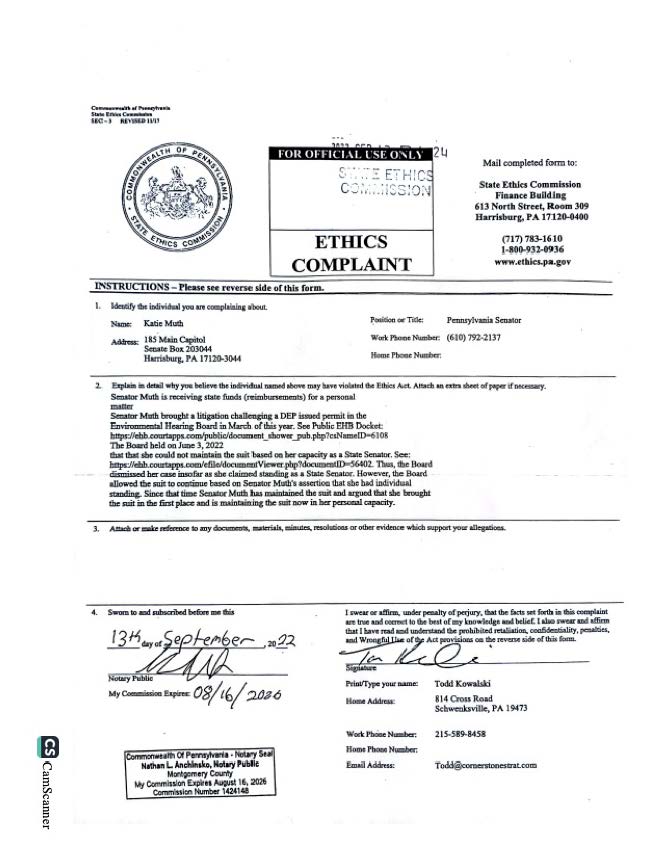 Whether the complaint is valid is not a question that can be resolved here but it raises a serious issue as to what is possibly motivating Katie Muth in this matter. How did she find Lisa Johnson so far away? Why did she use this unknown attorney? Why did she bring a case so far astray from her district? Why is she still pursuing it personally after being so humiliated and given a way out by the EHB? Is someone else behind this lawsuit? What would lead her to obsess on this case and go to such extreme lengths to assert she had a personal interest? Perhaps the real question is not whether Katie Muth is working on the Commonwealth dime in her personal interest but, rather, whose dime is paying?

Her attempts to suggest she does have a personal interest are laughable as we see from this filing by the opposition and the excerpts below (emphasis added and citations deleted):

Senator Muth simply has not and cannot establish that she has been, or will be, aggrieved, because she has no substantial, direct, and immediate interest in the outcome of the appeal. The entire premise of her appeal relies on her role as a state senator…

1. The Senator’s Visits to the Dimock Area

Senator Muth made four (4) brief visits to the Dimock or northeastern Pennsylvania area, three of which lasted less than one day. In response to discovery requesting any documentation that could support her claim of individual standing, Senator Muth provided three (3) redacted credit card transaction reports. Senator Muth claims that these costs were “unreimbursed” by the Commonwealth, the supposed inference being that if the state did not pay for it, it must be personal business. These ‘in and out’ visits to Dimock do not establish individual standing…*

It would certainly be reasonable to say that any visit where a sitting state senator is “staffed,” and the Commonwealth pays for the meals of state employees, is official business, not personal business. Also in response to discovery, Senator Muth did not provide receipts or credit card reports for this October 2021 visit, and the Board should draw the reasonable conclusion that this is an admission that her presence in Susquehanna County and the Dimock area was related ONLY to her role as a state senator and not on any personal or individual level.

*In response to interrogatories asking for particulars as to her individual standing, Senator Muth stated only that she and her family “recreate” in Susquehanna County, that they eat food that may be tainted from cows that drink from the Burdick Creek, and that she occasionally drinks water in the City of Harrisburg…

2. Temporary and Transient Lodging and Workplace in Harrisburg

In further responses to discovery requests to produce evidence of her individual standing, Senator Muth produced redacted lease agreements that show only that she rented a shared apartment as co-tenant somewhere in the Harrisburg area after she was elected to the State Senate. The only conclusion to be drawn from this is that the apartment in Harrisburg is clearly for her use for official business in connection with her role as state senator for when the Senate is in session or attending other functions in her role as state senator. She produced no lease agreements for a Harrisburg apartment from the time period prior to being elected to the Legislature…

Senator Muth’s time in Harrisburg is very limited. Records show that over a 13-month period (June 2021 – July 2022) for which records are available from the Senate website, (i.e. per diems, mileage and toll submissions), Senator Muth expensed a total of 28 days in Harrisburg, as evidenced by 27 per diems connected with Senate session, and one day which did not include an overnight stay. During that 395 day time period, the State Senate was in session on sixty-five (65) days. Senator Muth’s implication that she has standing based upon the amount of time that she spends in Harrisburg for legislative sessions must be viewed in light of the fact that the State Senate is intermittently in session throughout the calendar year.

Even though Harrisburg sits along the Susquehanna River and is in the Chesapeake Bay Watershed, Harrisburg is too far away from Dimock to provide individual standing. Conferring standing on this theory would confer standing to appeal to every legislator and every other state employee who comes to Harrisburg occasionally for their official business to appeal to the Board any DEP decisions covering the thousands of square miles of the Susquehanna watershed. This is precisely the premise that was rejected in the Board’s prior opinion and order regarding representational standing, where the Board agreed that this would lead to an absurd and chaotic result of allowing all elected officials and potentially thousands of state employees to have standing over practically any Department action.

In clear desperation to try to manufacture individual standing beyond the “four visits,” “work occasionally in Harrisburg” and “transient, occasionally occupied apartment in Harrisburg” attempts, Appellant claims vaguely that she (and her family) “spend time in” Dimock, that she resides, works and “recreates” in the Burdick Creek area, and that she and her family enjoy recreating in the along the Susquehanna River both in Harrisburg and in Susquehanna County. Senator Muth has presented no documentary evidence or more particular statements to support these vague claims. Not a photograph, receipt or anything that would substantiate these claims – nothing.

Also, Senator Muth claims so-called, “food chain based” standing before the Board which has never been held to be a basis for standing. She claims that she consumes food that may be impacted by the Eureka discharge. Again, there is no documentary evidence to support this novel claim despite the request for same. In any event, generic “food chain” standing, if swallowed by the Board, would convey personal standing upon almost everyone and anyone to challenge any action taken by the Department with respect to a permit anywhere. The Board previously recognized the chaos that would result from a holding that would confer standing upon “tens of thousands” of state employees, and accepting this generic theory of “food chain based” standing would multiply that chaos by many orders of magnitude.

It’s obviously hard to argue with any of this. But, why would Katie Muth even offer up such hilarious reasons to pursue a lawsuit against a water recycling facility so far removed from the land and people she supposedly serves? That is, ultimately, the question that matters. Why is Katie Muth so ridiculously committed to such a ridiculous case? What is behind this?