[Editor’s Note: Garland Thompson shows why the Keystone XL pipeline, killed by Joe Biden at the first chance, was and remains one of the solutions to Europe’s energy crisis.]

As I said in our recent phone conversation, it’s clear the reason the U.S. — and much of Western Europe as well — have been buying so much Russian oil and gas is found in the restrictions on petroleum production in the Americas. And now that Joe Biden has banned American imports of Vladimir Putin’s oil and gas, the solution to the energy imbalance Putin’s war on Ukraine is causing can be found in North America as well. Have a look: 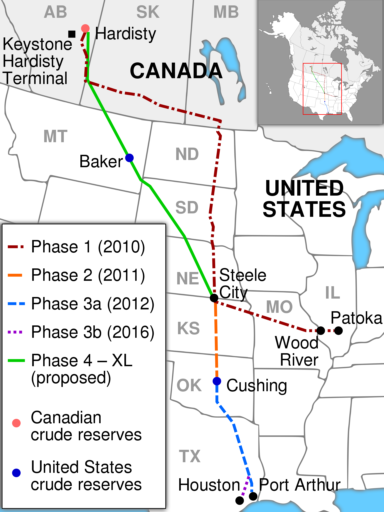 White House official Daleep Singh appeared recently on a national TV show to discuss the impact of President Biden’s decision to ban imports of petroleum and natural gas from Vladimir Putin’s Russia. So far, so good.

But, then Mr. Singh veered into fantasy land, dismissing American energy leaders’ complaints about the President’s continued lockage of completion of the Keystone XL pipeline, saying “the Keystone XL is half-built, and it’s not full,” implying the pipe’s completion would not help cover for the disruptions of world energy markets Putin’s war on the independent nation of Ukraine is causing.

Did the eminent Mr. Singh somehow manage to forget that the Keystone XL’s main job was to move oil from Canada to the U.S. Gulf Coast, not just to carry supplies from U.S. Midwestern fields south? If so, he’d understand why that transmission line is running at less than full capacity.

But maybe his misunderstanding stems from a failure to focus on the bigger picture in oil; that the reason Americans have been importing Russian crude oil supplies is twofold:

The Keystone XL, so casually dismissed by Mr. Singh, would have brought large quantities of Canadian high-sulfur crudes to replace that boycotted Venezuelan oil.

Providing such a large-volume shipping channel, vastly increasing the supply Canadians ship over two smaller, pre-existing transmission lines and the steady chug of crude-by-rail shipments regularly flowing from Alberta’s oil-sands production fields, would do much more than just supplant the need for the Biden Administration to be sending emissaries to work out ways to dial back tensions between the Miduro regime and the American authorities.

In English, for Mr. Singh’s benefit, it also would make it less imperative for American officials to go begging the Saudi government to “turn the spigots on” to cover for the challenges posed to Western nations’ energy security as they work to punish Vladimir Putin’s brutal war of aggression against Ukraine.

Turn on the OPEC spigots? No, it is a far better idea to turn on the spigots in Canada, America’s biggest trading partner.

Ditto for turning the spigots on in the shale oil fields of Texas and New Mexico, which have shown they have the might to drive deep cuts in the price of oil on world markets, much to the dismay of OPEC and friends, but generating jobs across the American landscape nonetheless.

Mr. Singh, who apparently thinks Americans somehow can just flip a switch to eliminate fossil fuels altogether for an answer, might ponder that.