I just spent 3 months working in La La Land, otherwise known as the State of California. I was out there working in support of the wildfires, that started in July and August and are continuing to this day. My work took me over a wide swath of the state from the Northern wine country and San Francisco Bay area to Southern California, Los Angeles County. There are many similarities to my home state of New York.

Here are some observations that I made. One positive comparison that I noted is that California has a bottle redemption program like New York. We have grown accustomed to paying the bottle deposit, the streets are cleaner and the redemption fees provide a revenue stream for various clubs and non-profit organizations. That was the one positive comparison that I could find.

Like New York, California is over-regulated and over taxed. Residents complained about the unreasonable Covid-19 lockdowns that severely injure businesses and don’t seem to apply to the liberal elite. While I was there California had not yet opened any inside dining which was no problem for Trendy beach communities or elite wine areas but was really hurting communities in the mountains where it was too cold for outside dining.

Essentially, like New York, the cities control the political power base and rural communities don’t have a voice. Like New York the cost of living and the cost of doing business Is higher than other states. The taxes and tourism fees for people who travel, are as high as $35 a night tacked on to your hotel bill. Businesses and residents are leaving the State. I recently read about Tesla and Oracle leaving California and moving to Texas. I spoke with one California clean-up contractor who was in the process of moving his business to Utah. He said that his business covers much of the West Coast and he could still service his clients from Utah and get to keep some of the money that he earns.

California, like New York, is focused on alternative energy such as solar and wind power. One plus that California has is that they have lots of sun. I saw many rooftop solar installations and I went by a medium sized commercial solar plant near Palmdale, CA and I passed the 600 turbine Mojave Wind Energy Center.

A big difference that I noticed about these two plants compared to similar plants constructed in New York is that these were both constructed on desert lands that did not need to be altered to allow construction. In comparison, the Broome County solar plant in Conklin clear cut 22 acres of trees and re-graded the lot to fill in low spots to build their plant. Additionally, in New York, mountain tops are frequently cleared of trees to make way for windmills.

I saw lots of electric cars in California and I drove by the Tesla plant several times while I was in Silicon Valley. I spoke with some electric car owners to understand what it was like to operate them. There was a pay to charge meter at one of the locations where I worked. 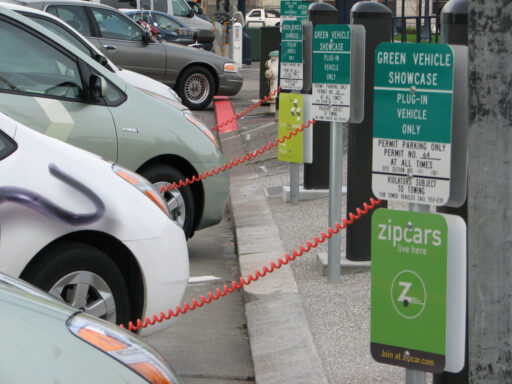 A man would come over every day after work to charge his BMW for 30 minutes before driving home. He told me that with the 110 volt charger at his house he could charge his car completely in 7 hours. He was in the process of having a 220 volt connection installed at his house that would allow his car to be fully charged in 3 hours. I mentioned that I didn’t think that electric cars would work well in the below zero weather of New York. He said that he wasn’t sure, but didn’t think it would be a problem.

Later I worked in the mountains near Yosemite National Park which had already received several inches of snow in November. I didn’t see a single electric car or any charging stations in that area. One drawback I noted to solar and wind generation was alternating power blackouts or brownouts. I didn’t experience a blackout while I was there but there had been some rolling blackouts before I arrived.

We were reminded of these La La Land features by the overhead highway signs that encouraged residents to “Conserve energy 6 pm to 9 pm” as this is the prime time for loss of solar generating capacity and the peak demand of everyone getting home from work and plugging in the car, turning up the air conditioning and cooking on the electric stove.

One hotel that I stayed at had frequent brownouts right around 6am. The lights would dim and the ventilation fan would stop. These would last for about 20 minutes and probably occurred 7 out of the 10 days that I stayed there. They were likely the result of the opposite demand of everyone starting their day and the sun not being up yet.

I met many firefighting crews during my work. We shared many of the same hotels and they worked day after day in the hot sun trying to contain fires that devastated millions of acres. Most of these fires were in the rural mountains far from town and were battled by specially built all wheel drive trucks designed to navigate the narrow mountain roads. I was struck by the fact that there is no way to build a truck of this size and ability that could haul water several thousand feet up a mountain and transport a crew in air conditioned comfort, powered only by electricity.

California has the same goal as New York to eliminate fossil fuels from power generation and transportation sector.Yet, like New Yorkers, they are a car loving people, I did see a new commuter rail line under construction extending from the Bay Area up into the Sonoma County wine region.

New York talks like they want to go fossil fuel free by 2050 but if they really wanted to, they should be building rail lines now. With New York’s over-regulated bureaucracy, It will take more than 30 years to get these projects built, especially given the fact many of the old rail lines have been turned into hiking trails.

The other noteworthy observation I made about California is a clue to a future New York. Everything smells like marijuana. I fully expect it to be legalized in New York, and with it you will get that strong skunky smell everywhere you go. Walking out of the airport on my arrival I almost said out loud that “something smells like a skunk.” (I’m from the country after all).

Apparently in California non-smoking only applies to tobacco. My certified non-smoking rental car smelled like pot. The scent lingers in the hallways and seeps through the bathroom vents of non-smoking hotels. You can smell it on the beach, on the street outside of restaurants and in building stairwells.

What can we expect for New York if we continue to follow California’s lead? Higher taxes and higher energy costs coupled with a lack of a reliable supply. Businesses and people continuing to leave for less regulated states. The fragrant aroma of marijuana wafting on the breeze is what will be left behind. Some will living the high life in La La Land but La La Land is no place to make a future.