Labor Day is a nice reminder of the dignity of real work, but also the role of fossil fuels in making it all possible and rewarding.

Bob Bradley, over at the Master Resource blog, has out together a wonderful collection of images illustrating just how much fossil fuels, especially oil and natural gas, have contributed to making work less a case of drudgery and more one of dignity. All productive work has dignity, as Mike Rowe’s “Dirty Jobs” series has proved over and over again. Nonetheless, when the opportunity to eliminate the drudgery comes along, human dignity usually demands we embrace it, if for no other reason than to free the worker to enjoy life and ponder its meaning. And, if we but look back just a few generations, we find it is energy that has made Labor Day possible as a celebration.

Indeed, when I was in Seventh Grade and we studied Shakespeare’s “Seven Stages of Man,” my 75-year old grandmother still had a wood stove and fed it sawmill trimmings she’d have delivered by the truckload. She also still had an old wooden icebox refrigerator in the basement, although, as I recall, it was no longer operable. She was born in 1888, and saw the relatively rapid change of her world from ice to electric refrigeration, from wood stoves to gas and from horses to autos. She raised seven children, helped on the farm and wrote articles for various publications, having been a teacher earlier in life.

Had my grandmother been born in 1998, instead of 1888, she would have probably been a writer, because oil and gas would have made freed her from many of the drudgeries of daily life; stoking the wood stove to cook meals on it, filling the icebox with ice and dealing with those horses, which was a chore then, not an avocation. Indeed, my father worked with horses when I was a tot and couldn’t wait to replace them with a tractor. Oil and gas made modern life possible for both him and my grandmother and, now all of us.

The rest of the story is told by the images Bob Bradley has gathered but here is my favorite: 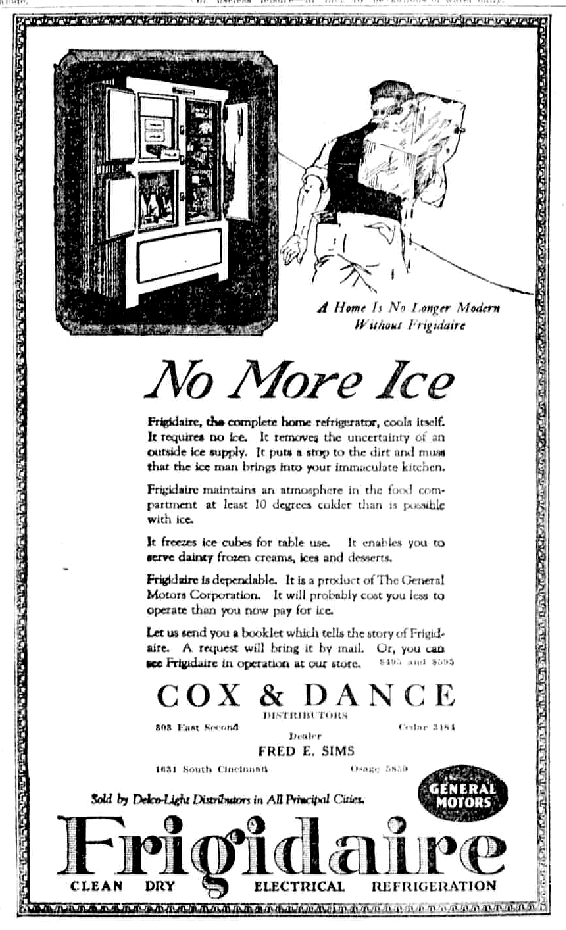 Note, too, that Frigidaire was, from 1919 to 1979, owned by General Motors, a company that itself would not exist but for oil and gas. Such are the contributions of the industry to every aspect of modern life; driving, cooking, heating, cooling, pharmaceuticals, plastics, computers, toys, manufacturing and a mile-long list of other things that have given work and life itself greater than ever dignity. There’s a whole lot to celebrate this Labor  Day.