A sporting clays fund-raising event for Lackawanna College’s School of Petroleum and Natural Gas reveals the breadth of the natural gas industry in Pennsylvania.

A growing number of companies are looking to the Lackawanna College School of Petroleum & Natural Gas(LC PNG) in Tunkhannock, PA, to prepare and provide the workforce of the future. The annual Sporting Clay Tournament benefit drew a wider variety of participants and sponsors this year to provide financial support for the school. Proceeds from the tournament help keep tuition low, provide for new technologies and ensure qualified applicants enter the energy industry qualified to handle the workload industry veteran. 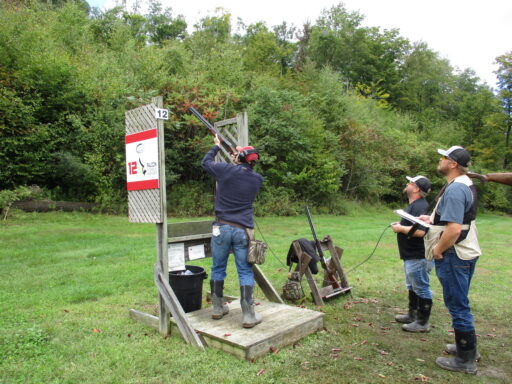 Coterra started the tournament a decade ago to support the build out of LC PNG’s original center in New Milford. In 2018, we handed the event over to the capable hands of Lackawanna College staff who have run it since. Not only did the original school outgrow the space available to it, but College administrators also assumed correctly that a move to Wyoming County would attract more attention from Lackawanna and Luzerne Counties to the south and Bradford, Sulivan, and Lycoming to the west.

“It’s a great fundraiser for a great cause,” said Greg Swiantek of KLX Energy Services of Towanda. “The school is providing ‘the up-and-coming workforce.’” It was the second year that he participated in the clay shoot, finishing as top male shooter in 2021.

KLX was one of 35 teams in the tournament with format of five shooters each firing at colorful clay discs propelled at a variety of heights, angles and speeds to simulate different hunting scenarios. The 16 stations at Hausmann’s Hidden Hollow in Susquehanna County took approximately three and a half hours to complete.

According to Lackawanna College president Jill Murray and vice president of external affairs and special projects Brian Costanzo, the clay shoot has become their biggest fundraiser for what has become their biggest new program. They are considering it as a template for other events like a shooting contest at nearby Camp Freedom to support their criminal justice program.

Coterra, Southwestern Energy (SWN), and Williams continue as Top Gun sponsors for the event, and new companies come on board every year to cover the cost of signage, ammunition, food and other important elements. A key new sponsor this year was EQT Corporation,, who recently entered the region with its acquisition of Alta in Lycoming County. EQT’s generous support helped to expand the popular gun raffle and supplied many of the firearms that were won by ticket holders after lunch.

Coterra and GasSearch Drilling Services (GDS), a wholly owned subsidiary of Coterra, both sponsored teams, and a number of our employees participated by filling vacancies on other teams.

Coterra completions engineer Zach Conrad competed with two employees from WorkOver Solutions and Keystone Clearwater. Zach received his PNG education at Marietta College in Ohio but has become a big fan of LC PNG and is taking a more active educational role with the program. “Lackawanna College has much more to offer, especially from an equipment standpoint and hands-on experience,” he stated. “The resources that they have there are incredible.”

It was encouraging to see the number of companies participating in the shoot returning to pre-COVID figures, and we expect another increase in participation next year.