[Editor’s Note: LNG exports from the United States to Europe are booming due the latter’s stupidity and Russia putting its own needs first after luring Germany into dependency.]

Europe has plenty of its own natural gas (and oil) that can readily be tapped–but they refuse to do so because they hew to the popular mythology that using fossil fuels is destroying the planet. Yet, Europe must also face reality: Without burning fossil fuels, like natural gas, the continent will go dark and people will freeze to death this winter. What’s a psychotic continent and its “leaders” supposed to do? We’ll tell you what they are doing–they’re buying up LNG as fast as they can. They won’t make the natural gas themselves, but they’ll buy it from others, including the U.S.

Europe’s self-inflicted wound with lack of natural gas supplies is setting the stage, says RBN Energy, for “record winter prices” for natural gas–both in Europe and here in the U.S. If Europe or the U.S. has a hard and cold winter, Europe is well and truly screwed. The only backup plan they have is to depend on the generosity of Vladimir Putin and pipeline supplies of gas from Russia. Good luck with that.

Global natural gas and LNG prices have spent the summer going from high to higher to the highest on record. The major European indices hit post-2008, and then all-time highs multiple times throughout the summer — even surpassing Asian prices on a handful of days. At the same time, Asian prices have set all-time seasonal records and are now sitting just below the previous single-day high settle from this past January.

Usually, as the weather cools heading into fall, so do prices, but that’s unlikely this year as the European gas storage inventory is at the lowest level for this time of year than we’ve seen in recent history, and the time to replenish stocks for the winter is rapidly running out.

The incredible bull run for global gas prices has been underpinned by high demand for LNG and the cascading effect of a supply squeeze in Europe, brought on by the triple threat of low domestic production, decreased imports from Russia, and a scarcity of incremental LNG cargoes. Not only is this driving record-high gas prices and increased volatility now, but the low inventory means sustained high prices for the heating season ahead. In today’s blog, we take a look at recent global gas price trends and the precarious European storage situation ahead of what is shaping up to be an incredibly bullish winter…

Global demand for LNG is simply outpacing the supply of available cargoes.

While overall higher global demand is supporting prices at these lofty levels, Europe in particular is facing an extreme supply crunch…

European production has been in a steep decline for more than a decade, both because of declining reserves in existing production fields and the European Union’s (EU) environmental regulations…

Due to its declining production levels, Europe is heavily dependent on natural gas imports — both piped from Russia and via LNG cargoes. Russia supplies the largest share of European gas imports and reliance on Russian gas is increasing as Europe’s domestic production falls. Most of the gas in Russia is controlled by state-owned Gazprom, which gives it an enormous influence on the European gas market. Russian gas is piped through a variety of routes, most of which have to pass through Ukraine to reach the EU. The exception is the Opal-Nord Stream route, which pipes Russian gas directly to Germany through the Baltic Sea. Russia strongly prefers this route for gas as it cuts Ukraine out of the trade equation, giving it even more power and control over gas supplies into Europe. To increase flows along this route, Russia proposed the Nord Stream 2 pipeline, which would double the capacity along the route through the Baltic Sea to 10.6 Bcf/d (110 billion cubic meters, or Bcm/year). However, the project has been incredibly controversial, and, until recently, there was a lot of uncertainty around when and if the pipeline would be completed. While it was heavily favored by Russia and Germany — with the latter negotiating for it to go ahead — the U.S. had been strongly opposed to the expansion for geopolitical reasons. The impasse ended in late July, however, when the U.S. and Germany reached a deal, with the U.S. agreeing to drop the threat of further sanctions on the project, and it now looks likely to go ahead. Pipe laying work was completed earlier this week, and the line now just needs to be tied into the German gas grid. Officially, the pipeline is targeting the start of service before the end of the year, but it could be as early as October.

From the U.S. gas market perspective, the pipeline could create headwinds for its LNG exports in the long term, particularly for export projects still looking to reach final investment decisions (see the latest LNG Voyager Quarterly report), as it will decrease the amount of LNG Europe needs to import. In the near term, however, even if Nord Stream 2 starts soon, its likely too little, too late for European storage levels to recover. Europe’s imports from Russia are down this year even though the country’s production has been strong. This was thought to be a response in opposition to the Nord Stream 2 pipeline and to bolster support for the pipe by showing that it is needed. Russian officials have commented recently that the country is experiencing unusually high domestic demand and needs to fill its own storage. Additionally, a fire at a gas processing plant in early August knocked some production offline. Regardless of Russia’s motives, lower pipeline imports from the country are exacerbating Europe’s supply shortage…

With prices soaring currently, U.S. LNG is of course firmly in the money and terminals are likely to operate at full utilization of contracted capacity, or even higher, to produce spot market cargoes whenever possible this winter. Beyond that, the extended and incredibly bullish trend for gas prices has renewed interest in new North American LNG capacity (see You Can Make It If You Try), and will potentially provide enough momentum to push one of the projects to take FID before this bull run is done.

Even the libs at CNBC recognize the pickle of Europe (and Asia) and says, “Natural gas prices are rising and could be the most expensive in 13 years this winter” (emphasis added):

Natural gas prices have doubled this year and are expected to continue to rise, resulting in larger winter heating bills for some consumers and higher costs for electric utilities.

Natural gas is plentiful in the United States and has been cheap for years, so the jump in prices this year is eye popping. It has also lifted the shares of companies that specialize in natural gas production, like EQT, Range Resources, Cabot Oil and Gas and Antero Resources.

In the futures market, the natural gas contract for October rose above $5 per one million British thermal units, or mmBtus, for the first time since February, 2014. Besides electricity and heating demand, natural gas is an important feed stock and is used in the processing of chemicals, fertilizers, paper and glass, among other products. 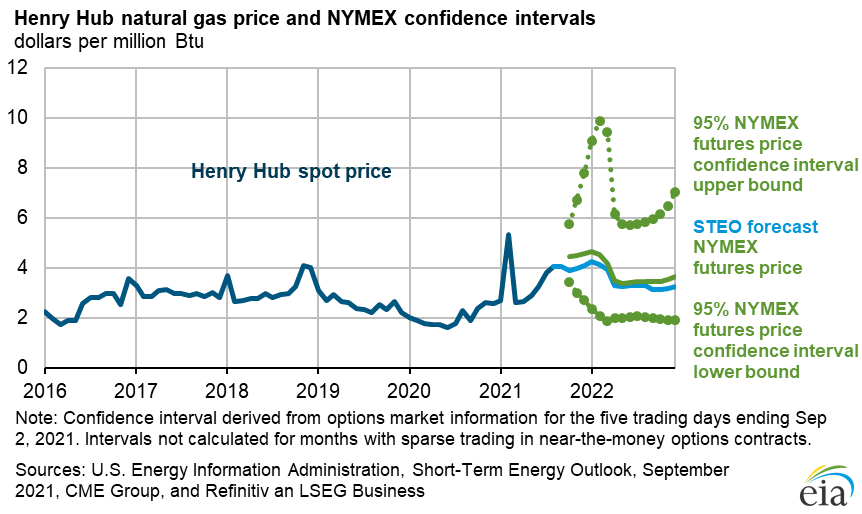 “We haven’t had tight supplies of natural gas in years. We’re staring that down this year,” said John Kilduff, partner with Again Capital.

Natural gas prices have been caught in their own perfect storm, of lower supplies and rising demand. Prices raced higher, first as unprecedented heat stoked air conditioning demand across the U.S., particularly in the Northwest. As a result, less gas was put into storage for winter months, during the key summer injection period.

Add to that any colder than normal winter weather and prices could jump more. “Anything closer to [or colder than] a full standard-deviation form average would likely trigger a price spike to cause demand destruction with gas above $10/mmBtu,” Goldman Sachs analysts note. Gas prices were last that high in 2008.

Yet Joe Biden is traveling down the same road as Europe, full speed ahead. There’s just no fixing stupid.