Exporting American-produced natural gas has massive climate benefits as it will help other countries lower their CO2 emissions by replacing more carbon-emitting fuels.

As the Financial Times reported on its interview with Toby Rice of EQT:

“The head of the largest US natural gas producer has said boosting American exports of the fuel could be the ‘biggest green initiative on the planet’ by displacing coal at power stations.

“Rice … said in an interview that the world would decarbonize more quickly if Asian countries could buy more liquefied natural gas to replace coal to generate power.”

Energy In Depth has previously noted how natural gas has become a critical part of the climate solution for China and India, and Rice specifically cited Asia as holding the greatest opportunity for lower emissions. In fact, just two days after those comments, Bloomberg reported that another major U.S. LNG developer signed a long-term deal for exports to China:

As Bloomberg reporter Sergio Chapa said in recent tweets, that makes for 17 U.S. LNG contracts with China in 2021 totaling 31 mtpa and making China the largest buyer of U.S. LNG this year.

For those keeping score, that is 17 U.S. LNG deals for more than 31 mtpa of the fuel

Rice also mentioned how natural gas is the one fuel that the U.S. can produce domestically and then export that will also have huge climate benefits:

Natural gas, already a cleaner-burning alternative to tradition fuels, is also becoming much more efficient thanks to ever improving technology, and Rice spoke of how it has helped the U.S. lower emissions in recent years:

“The EQT chief said that by capturing greenhouse gas at power plants, natural gas could eventually be ‘zero carbon.’ But he said the fuel should be recognized for its role in reducing US greenhouse gas emissions in the past 15 years — and promoted internationally.

“‘We cut our emissions by almost 1bn tonnes a year because of coal to gas switching, but during that same period China and India have raised their emissions by 6bn tonnes’” as coal generation continued to rise in those countries, Rice said.”

Earlier this year, a report from Berkeley Labs showed the emissions in the power sector fell dramatically from 2005 to 2020 and found that natural gas was a major reason for the decline:

“Natural gas generation grew from 761 billion kWh in 2005 to 1,617 billion kWh in 2020. Assuming this growth only displaced coal and considering the relative emissions rates of gas and coal, we estimate that increased natural gas supply reduced 2020 CO2 emissions by 470 MMT or 48 percent of the total emissions reduction since 2005.” (emphasis added) 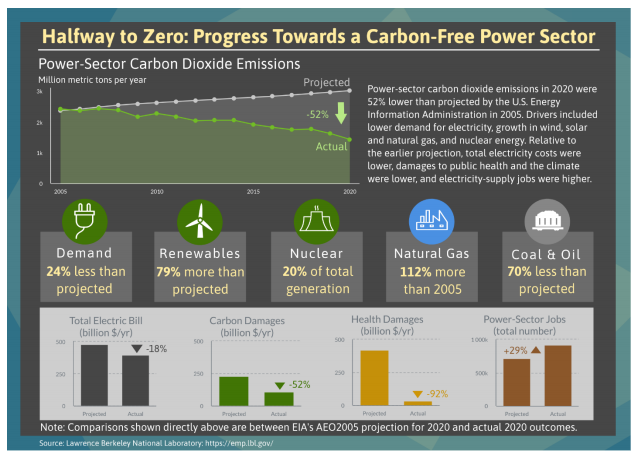 Now, the United States is set to build on this progress by becoming the world’s top LNG exporter in 2022, meaning American-produced, cleaner-burning natural gas will have even greater climate benefits in the future.