As prices continue to rise around the country, a majority of Americans support increasing domestic oil and natural gas production, according to a new Morning Consult and Politico poll.

Against the backdrop of Americans paying nearly double at the pump than they were at the start of 2022 – and even higher in California where this week Los Angeles became the first major U.S. city to see prices above $6 per gallon – support government efforts to increase production. From the poll:

“Nearly 3 in 4 voters (72 percent) also said they would support a push by the federal government for domestic producers to pump more oil.”

Meanwhile, around 56 percent support opening federal lands for oil drilling, an option that has been hampered by current Biden administration policies like an illegal ban on federal leasing. The Bureau of Land Management has not held a single onshore oil and gas lease sale for more than a year, and the administration chose not to appeal a recent court decision to vacate the only offshore sale that the Bureau of Ocean Energy Management held in November. 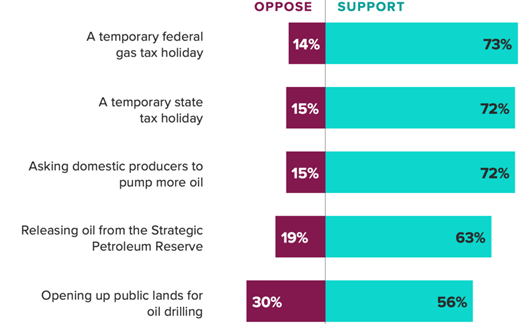 These two polls demonstrate that Americans understand the importance of having policies that promote strong domestic energy production – and that for the last year, the administration’s policies have done the exact opposite.