Manchin Taken for A Ride by Chuckie Schumer?

Manchin Taken for A Ride by Chuckie Schumer?

Senator Joe Manchin is seeking a bill on permitting reform this fiscal year that could help accelerate wind- and solar-power projects as well as pipelines for oil and gas. Utility energy projects such as power transmission lines and offshore wind farms as well as oil and gas pipeline projects can be delayed for years and costs increased due to opposition from environmentalists and court challenges. Building a power line spanning several states, for example, can now take about a decade, up from five to seven years previously. If it can be built at all. Manchin’s deal with Schumer – in exchange for support of the climate/tax reconciliation bill — would expedite new energy projects, in part by streamlining federal permits and limiting court challenges.

The bill, however, is receiving pushback, particularly from Progressive Democrats in the House who do not feel committed to the deal since they were not part of the negotiations. They do not want to see permitting reform because streamlining energy projects would undercut their newly enacted climate spending law. According to Manchin staffers, Chuck Schumer committed to permitting reform being finished by September 30 and passing both houses of Congress.  Presumably, this reform would be in a spending package required to fund the government beginning in October. 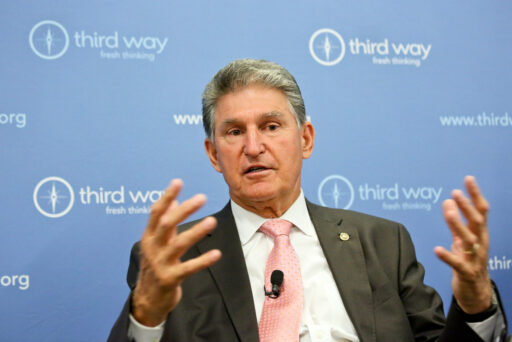 Manchin: A “third way” guy, a sellout or just another damned politician taken for a ride by unprincipled sleazy fellow Democrat Chuckie Schumer?

Transmission lines are needed for President Biden’s goal of reaching net zero carbon in the power sector by 2035 because they need to transmit electricity from wind and solar farms that are often located far from demand centers where most Americans live. In the Midwest, a roughly 102-mile transmission line from Iowa to Wisconsin was initiated in 2011 and has not yet begun to deliver power due to the multiyear process to secure permits and litigation over the project’s environmental impact. Its completion date has been extended to the end of 2023. Environmental groups argue that the line would damage sensitive floodplain habitat in the upper Mississippi River. The company, ITC Holdings, had to secure multiple permits–from a county drainage permit all the way up to a federal permit to cross the Mississippi.

The 303-mile Mountain Valley Pipeline, which would carry natural gas from Appalachia to markets in the mid-Atlantic region and the Southeast, has been halted by litigation brought by environmental organizations and delayed since it was federally approved in 2017. The pipeline was originally set for completion in 2018 and is now 94 percent complete. The delays have increased the pipeline’s cost from the original estimate of $3.5 billion to $6.6 billion.

According to a summary released by Manchin’s office that also details what the Senator expects in permitting reform, the White House and congressional leaders have agreed to ensure final approval of all permits for the Mountain Valley Pipeline. The agreement would also move any further legal challenges to the Mountain Valley pipeline permits from a federal appeals court to the D.C. Circuit Court of Appeals. Opponents of the pipeline claim that the pipeline poses environmental risks to streams and forests and will endanger the health of local communities. Some groups out right admit they are opposed to the use of any fossil fuels or anything that accommodates their use.

Developers in recent years abandoned at least two multibillion-dollar pipeline projects in the Northeast after facing prolonged fights across several government agencies. The costs developers incur fighting regulatory and court challenges are often enough to make them abandon much needed projects, which of course is the goal of organized opposition.

Legal and regulatory battles have also slowed renewable-energy projects. The permitting process for wind projects can take four to six years. The first federal permit for a wind project off Massachusetts was filed in 2001, but to date, none have been built.  A project to build a commercial-scale offshore wind farm off the coast of Martha’s Vineyard was federally approved last year, but faces lawsuits because of potential harm to commercial fishing in the area and threats to ocean wildlife. Former President Barack Obama, who owns property on Martha’s Vineyard either thinks that the wind farm won’t be built or he is unsure about its reliability for he has added three large propane tanks totaling 2500 gallons to his Martha Vineyard’s property. In rural areas, solar projects are having problems because of their massive land footprint.

Further, the Biden administration has restored stricter environmental standards that were in effect during the Obama administration for approving new pipelines, highways, power plants and other construction projects and is requiring consideration of how any such projects might affect climate change in the permit approval process. Projects are often challenged under laws that have seen few adjustments since their passage in the 1970s. The Clean Water Act and the National Environmental Policy Act, which imposes federal reviews of the environmental impact of projects, are such pieces of legislation that need to be overhauled.

On top of federal permitting, state and local governments also have permitting authority which is not affected by the federal legislation. For example, in the case of the first offshore wind proposal for Massachusetts, the project “needed approval from the Cape Cod Commission; a Chapter 91 license from the Department of Environmental Protection (DEP); a water quality certification from the state DEP; access permits from the Massachusetts Highway Department for work along state highways; a license from the Executive Office of Transportation for a railway crossing; orders of conditions from the Yarmouth and Barnstable Conservation Commissions; and road opening permits from Yarmouth and Barnstable.”

Senator Manchin also wants the energy permit legislation tied to a stop-gap funding measure to keep the government funded past September 30 since it would give Democratic leadership leverage to stave off defectors. He warned of a government shutdown if both parties do not get behind his proposal.

Permitting reform is needed as Senator Manchin has proposed through his deal with Senator Schumer. He is however getting pushback, particularly from House Democrats, who are not committed to the deal and feel it will encourage oil and gas projects, which they want to end, despite the fact that Americans still need energy from fossil fuels that provide about 80 percent of U.S. energy supply. Renewable energy can barely handle the increasing demand in the electric power sector, so how will they be able to cover the 60 percent that natural gas and coal currently supply as well?