Manchin Turns Out to Be A Spoiled Little Munchkin After All

Manchin Turns Out to Be A Spoiled Little Munchkin After All

[Editor’s Note: Joe Manchin has revealed himself as just another Democrat willing to sell out his state for a meaningless “will get ’em later” promise from fellow Democrats.]

U.S. Senator Joe Manchin, in an interview with the Associated Press, attempts to come off as the reasonable, middle-of-the-road, aw-shucks guy who sticks up for what he believes is right and the good of West Virginians. Don’t fall for it. He was pressured by the wackadoodle left in the Democrat Party, and he folded like a cheap suit. Manchin deserves to be voted out of office the instant that opportunity arises. We’re talking, of course, of Manchin’s betrayal of fossil energy through his support for one of the most destructive pieces of legislation that has passed since Joe Biden began to occupy the White House–the so-called Inflation Reduction Act (IRA), better known as the Green New Deal (aka Build Back Better). Manchin’s betrayal has profound consequences for fossil energy in this country. 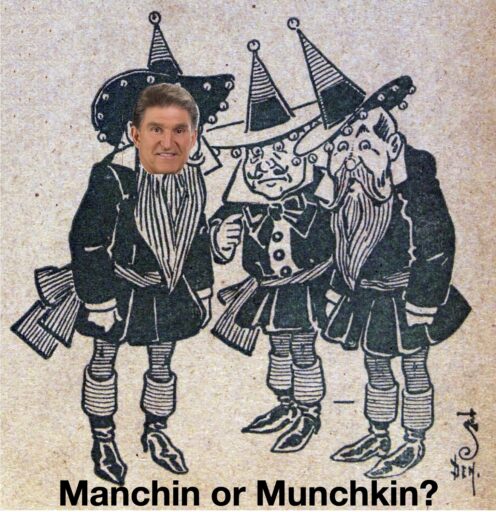 1. The IRA imposes a new corporate minimum tax, increasing taxes on Americans by more than $300 billion over the next ten years. As President Obama noted in 2009, “the last thing you want to do is raise taxes in the middle of a recession.”

2. The IRA imposes an $11.7 billion tax on crude oil and petroleum products. At a time of record-high energy prices, Congress should not add additional costs on American energy companies competing globally.

3. The IRA imposes additional constraints on the ability of companies to develop and produce the energy that Americans need to fuel our economy and strengthen our energy security. This includes increased fees on domestic production and the establishment of a new $6.3 billion natural gas tax (see Joe Manchin’s Green New Deal Cave Slaps O&G with Big Methane Tax).

Yet Joe Manchin has the gall to say he’s protecting the fossil energy industry. Give us a break!

Here was Joe talking with the socialists of AP, defending his indefensible action in passing this abysmal bill:

Sen. Joe Manchin said he pays no attention to criticism or campaign donations when making decisions about what’s best for West Virginia.

Sounding somewhat exasperated when asked whether the dramatic bump in campaign contributions he’s received from oil and gas interests in recent months influenced his voting, the conservative Democrat said no.

During a roundtable discussion in Charleston on Friday, he said his office’s outsized role in drafting the sprawling economic package signed this week by U.S. President Joe Biden made him the target of the “far left,” environmental activists and the fossil fuel industry all at once.

“Nobody in their right mind would go through what I have gone through with my staff for the last eight months, taking all the crap we’ve taken from everybody in the country” if they weren’t doing what they believe is right, he said.

“I can be the hero and the villain all within a 24-hour shift,” he said. “The bottom line is, I make no excuses for what I think is right. I’ve always said this — If I can explain that, I can vote. I can take the criticism I know that goes with those votes. That’s part of the game.”

Manchin, who chairs the Senate Energy and Natural Resources Committee, offered a key vote needed to pass the Democrats’ flagship climate and health care bill in the 50-50 Senate. The House used a party-line 220-207 vote to pass the legislation, which Biden signed Tuesday.

The law, which places caps on prescription drug prices for seniors and extends subsidies meant to help Americans pay for health insurance, contains billions in incentives for clean energy. Owing largely to Manchin’s influence, it also offers renewed support for traditional fuel sources such as coal and natural gas with steps such as subsidies for technology that reduces carbon emissions.

“I wasn’t sure that they would ever agree because of my friends on the far left, the environmental community, was totally committed to dispersing and basically eliminating fossil,” Manchin said of the law.

But Manchin said there is “no way you can get rid of fossil in any short period of time.”

“You can use it cleaner as you basically transition, but it’s going to be with us, and you got to do the best you can with it,” he said. “So, I wanted to make sure they understood that.”

On the other side, he said he’s “been criticized by all my friends in the coal industry” because they think the bill doesn’t go far enough to protect their interests.

“(They) for some reason think that this is going to be harmful,” said Manchin, whose family owns Enersystems, a coal brokerage company. “I think it basically is a pathway forward so we can continue to produce industry, provide energy that our country needs.”

Under an agreement with the Democratic leadership, Manchin proposed a separate list of legislation to speed up federal permitting and make energy projects harder to block under federal acts. He also specifically asked that federal agencies “take all necessary actions” to streamline completion of the Mountain Valley Pipeline, a project long opposed by environmental activists.

This election cycle, Manchin has received more campaign contributions from natural gas pipeline companies than any other member of U.S. Congress — contributions that have increased from $20,000 in 2020 to $331,910 in 2022, according to campaign finance records compiled by Open Secrets.

On Friday, he said his agenda in advocating for the pipeline was to bring down the cost for consumers by increasing the size of the market and creating jobs. He insisted the campaign money had nothing to do with it.

“I understand the cynical part of that. People look at it and they go, ‘Well, they’re just taking care of themselves,’” he said. “I’m sorry people, I have no idea who contributes. I don’t look at that, I don’t go out and advocate that at all.”

He said lawmakers need to “rise above” corporate and party pressure to deliver for their constituents.

“Politics has become a very, very nasty, destructive type of process … both sides are guilty of weaponizing the good of America for the good of the party — both sides, and it’s just not right for our country,” he said.

Manchin says that a “side deal” to vote on a bill to finish the 94%-completed Mountain Valley Pipeline will come this fall. Think again, Joe (see Will Manchin’s Plan to Save MVP Work? Legal Experts Doubtful and Antis Gear Up to Defeat Manchin-Schumer Save MVP “Permitting” Bill).

Manchin goes to the top of the putz list. Hey Joe, you’re just the villain. You’re no hero–to anyone. We look forward to forcing you into retirement. When one side wants to destroy the country as founded, to remove our Constitution rights, you’re damn right we get “very, very nasty” and “destructive” with our politics. The future of the country is at stake!

Editor’s Note: We had hopes for Manchin but he sold out and knows damn well there will be no Fall deal to save the MVP because Democrats have sold their souls to the corporatists and radical ideologues who do the dirty work of both the the party and the corporatists. Democrats are, in fact, the party of the super-rich exploiters of government today; the hedge-funders, Big Tech, Big Green, et al. Moreover, even if there were to be such a deal, it would be scotched by the crazy liberal judges of the 4th Circuit who have demonstrated they have zero respect for the law. No, Joe Manchin has decided he wants to retire to a cushy corporatist job himself rather than run again for the Senate and he knows that’s the way Democrats and their corporatist friends roll. Yes, he’s helped on items such as the filibuster but that’s as far as it goes. He just sold out West Virginia and all of us big-time.