…
[Editor’s Note: This is about much more than a methane fee. It’s about the plans of the Biden Administration (the folks who control Biden) to destroy oil and gas (plus America).]

President Biden has a methane fee in his Build Back Better bill and his Environmental Protection Agency (EPA) is proposing a rule to reduce methane emissions. Biden announced at COP26 proposed methane rules put forth by the Environmental Protection Agency (EPA), which go beyond any previous regulation of methane in the United States, forcing operators of both new and existing infrastructure to monitor and fix leaks of methane.

The EPA proposed rules would establish standards for old wells, impose more frequent and stringent leak monitoring, and require the capture of natural gas that is found with oil. In the House Democrat proposed reconciliation bill, methane fees of as much as $1,500 per ton would be imposed on oil and gas infrastructure—from  wells and pipelines to the terminals that process natural gas for export. Together, the additional costs and fees that would result from these policies and regulations would disadvantage American producers, increase Americans’ energy costs and cause 90,000 jobs to be lost across the country.

EPA’s proposal would, for the first time, regulate existing facilities and would also add additional requirements to newly built or modified facilities, which were previously regulated under a 2016 rule.

EPA’s proposed rule would 1) update and broaden methane emission reduction requirements for new, modified, and reconstructed oil and gas sources, including standards that limit emissions from additional sources (such as intermittent vent pneumatic controllers, associated gas, and well liquids unloading); and 2) require that states develop plans to limit methane emissions from existing sources nationwide, along with standards for existing sources to assist in the planning process.

So, for the first time, EPA is proposing “emissions guidelines” that would set out a model regulatory policy that states would have to implement on existing sources. Under the Clean Air Act, while the federal government can directly regulate new sources, states are given the authority to regulate existing sources (subject to minimum standards set by EPA). According to the proposal, there are more than 800,000 existing facilities that would be newly subject to federal minimum standards. States would have some flexibility in how they regulate these facilities, but states must submit their plans to EPA for approval – so the guidelines act as a federal regulatory floor.

EPA expects its rule to reduce methane emissions by about 41 million tons through 2035—the equivalent of 920 million metric tons of carbon dioxide – about the amount of carbon dioxide emitted in 2019 from all U.S. passenger cars and commercial aircraft combined.

EPA is also requesting information on additional sources of methane for the Agency to consider in developing a supplemental proposal to further reduce methane emissions and is taking comments on how to structure a community monitoring program that would empower the public to detect and report large emission events for appropriate follow-up by owners and operators for possible further development in a supplemental proposal. EPA intends to issue the supplemental proposal in 2022, and to issue a final rule before the end of 2022.

EPA’s rule is a “back-door” method of increasing U.S. energy costs and simultaneously decreasing American competitiveness. And, while the rule does not affect agriculture, energy and agriculture contribute close to equal amounts of methane to the atmosphere, suggesting future regulation of agricultural emissions may be under consideration.

The methane fees in the proposed bill would begin at $900 per ton of excess methane emissions in 2023, increase to $1,200 in 2024 and to $1,500 in 2025 and subsequent years. The payments would apply to onshore and offshore oil and gas production as well as to underground natural gas storage facilities, pipelines, liquefied natural gas export terminals and other sites. It would be tailored to individual sites, by setting a threshold for leaks and imposing fees on emissions that exceed it. At natural gas production operations, for example, the fees would be imposed on reported methane emissions that exceed 0.2 percent of the natural gas sold from the site.

Biden’s methane fee would also unfairly punish independent oil producers many of whom are family-owned small businesses with fewer than ten employees. Targeting these wells would raise energy prices and could put these family-owned companies out of business or force them to sell to big companies. While many are small family-owned operations, the independent companies produce a major portion of U.S. oil production.

The proposed fees would be part of a $775 million Environmental Protection Agency program, which includes grants, rebates, and loans for oil and gas companies to help them report and reduce their methane emissions. Any methane payment, however, is likely to result in higher electricity and home heating costs for consumers since natural gas is the predominant energy source used for both.

One of Biden’s priorities at COP26 was pushing the Global Methane Pledge, which requires a 30 percent reduction in methane emissions from 2020 levels by 2030. It has been signed by over 100 nations, which represent nearly half of human-caused methane emissions. The number of countries supporting the initiative increased from six members when it was initially announced in September, to 105 at its official launch at Glasgow.

Brazil signed the methane pledge and other top emitters to join included Indonesia, Pakistan, Argentina, Mexico, Nigeria, Iraq, Vietnam and Canada. However, several large contributors to global emissions, including China, Russia and India, are not signatories to the global methane pledge, despite their being top methane emitters. 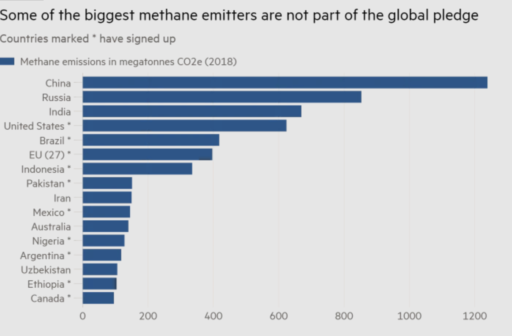 Australia also rejected signing up for the pledge as it is a major producer of fossil fuels and agricultural products. “We won’t sign our country up to policies that undermine the prosperity of our regions or make life harder for everyday Australians,” Energy Minister Angus Taylor said. “The only way you can get your 30 percent by 2030 reductions in methane on 2020 levels would be to grab a rifle and go out and start shooting the cattle,” said Barnaby Joyce, the deputy prime minister. “It’s just not possible.”

According to Taylor, “Calls to reduce methane emissions from the gas sector, a critical fuel source that complements the increasing share of renewables in our electricity grid, by shutting down production and generation is an invitation for the type of chaos we are seeing in Europe at the moment.” The Minister is referring to Europe’s energy crisis caused by renewable energy (principally wind) not producing, coinciding with a decline in fossil fuel sources and generators to back up the intermittent sources.

Methane accounted for 24 percent of Australia’s emissions in 2019. The nation’s energy sector emitted 548,000 tons of methane in 2020, or 0.7 percent of the global emissions.

President Biden has committed the United States to the Global Methane Pledge, which requires U.S. methane emissions to be reduced by 30 percent from 2020 levels by 2030. To do that, he has a methane fee in the proposed Build Back Better bill and his EPA has a proposed rule that will go into effect by the end of 2022 after a comment period is completed. Many countries (105) have signed onto the Global Methane Pledge, but top emitters China, Russia, India, and Australia have not. They refuse to make that commitment, which they say will hurt their economies and residents by increasing energy prices.  Apparently, that is of little concern to the Biden administration here in the United States.