[Editor’s Note: Middletown, Connecticut, is as politically correct as it gets, a model of energy stupidity wrapped in virtue signaling that will only empower corporatists.]

We just have to shake our heads. Radicalized anti-fossil fuelers have lost their way. They are obtuse. They insist on believing in the fairy tale of catastrophic global warming and insist a complete ban on fossil energy here in the U.S. will somehow fix the world so it won’t toast. It’s demented. But at some level, we understand them. We understand their blind delusion and what motivates them. What we don’t understand is why power companies like NRG cave and fold like a cheap suit whenever they run up against anti-fossil fuel nutjobs. The latest example comes from a tiny peaker plant NRG planned in Middletown, Connecticut.

Now comes word that a 375-megawatt plant planned for Middletown (in Middlesex County) planned by NRG will be nixed too. NRG had planned to retrofit an existing plant with a new, efficient, natural gas turbine and operate the plant for only half of the year, to produce electricity during times when the grid is overtaxed (like summer heat). Instead, Connecticut residents can go without electricity during those times. We hope they enjoy sweltering in rolling blackouts.

Here is the Middletown, Connecticut, Press take on it:

The power company that has purchased the NRG natural gas and oil plant on River Road says it will not pursue the prior owners’ plan to build a 375 megawatt fossil-fired facility, which drew opposition last year from environmentalists.

In a statement, Generation Bridge, a subsidiary of ArcLight of Boston, said it intends to develop renewable energy and energy storage at the site.

The expansion of the 1866 River Road plant was “vigorously opposed” last year by the Jonah Center and members of Middletown’s First Environmental Collective Impact Network Project A Success.

A number of concerns prompted individuals and members of the Jonah Center and others opposed to the plan to speak out, Middletown Energy Coordinator Michael Harris said.

“One of the objectives is, Connecticut supplies more than its fair share of regional electricity,” he said. “A lot goes out of state directly or indirectly.”

“We suffer the consequences of a polluted area, and don’t receive a benefit, because part of the surplus serves the rest of New England,” he added.

“The River Road plant in Middletown is an obvious site for a storage facility due to the high-voltage transmission line associated with the site and due to the 200 MW of offshore wind currently being developed in Long Island Sound, which will require an updated grid and nearby storage capacity,” ArcLight Managing Partner and Founder Daniel R. Revers said in a prepared statement.

NRG, which was seeking air permits to replace two aging turbines at the plant, is a “dirty peaking plant,” meaning it only runs during times of high demand, Harris said. The system is especially taxed during the summer months, when people run their air conditioning as the system hits its maximum load, he added.

It would have allowed the plant to emit up to 1 million tons of carbon into the atmosphere per year — a net increase of 891,701 tons per year above the existing facility, according to the Sierra Club.

That is equal to 13 percent of greenhouse gas emissions from current power generation in Connecticut, it said.

The plant runs on turbines, which were built in the 1950s and early ’60s, that run only for a few days in the summer, Hall has said. NRG’s intention was to keep it operating 182 days per year, he added.

“It would have supported a new 375 MW fossil gas turbine generator at a time when the state is trying to wean itself from electricity generated by fossil fuels,” Jonah Center for Earth and Art Executive Director John Hall wrote in his Jan. 29 newsletter.

The issue is balancing electricity production with electricity demand, Harris said. “As demand goes up, they bring on more power plants. The less efficient (and cost-efficient) plants run only for a short period of time when there’s a more severe need.”

Kleen Energy, located nearby at 1349 River Road, runs a natural gas turbine — which is a more modern plant, Harris said. The original proposal had been for the NRG plant to undergo modernization, however, that plan was tabled.

“The city believes that there’s a net benefit in the tax revenue received,” Harris said. “There are a lot of health penalties externalized and not figured into that accounting. I question the fact that it’s a net benefit,” especially when the additional health costs of having the plant located in Middletown is considered, he said.

“It may not justify that tax revenue,” he added.

The plan would have increased particulate matter emissions, which are very damaging to the lungs,” Hall has said. Most of these particles are very small and are easily inhaled, which causes lung damage, asthma and threatens respiratory health, he added.

There is a great push nationally for less use of environmentally damaging fossil fuels.

“That calculus is like a can kicked down the road continually and we’re running out of time to address climate disaster,” Harris said. This has to stop everywhere, not just the state.”

A similar situation recently played out in Killingly when the Federal Energy Regulatory Commission agreed to a request by the regional electric grid operator — ISO-New England — to keep the proposed natural gas power plant out of its future plans, according to the Connecticut Mirror.

We notice people like Michael Harris and John Hall don’t unhook themselves from the “dirty power” electric grid that feeds their homes. No way. That “dirty” power is just fine when it flows into their homes.

This NRG plant would have used Marcellus/Utica natural gas.

Editor’s Note: Jim’s complaint about the absurdity of radical anti-fossil fuel nuts is fully justified, as his frustration with NRG. But, there’s more to the story. It’s never really about ideology or the true believers who imagine they’re always the smartest people in any room and all that is required of them is the political will to impose their utopian world view. They are merely the patsies and useful idiots for those seeking power and money on a global scale using ESG as cover. That includes NRG, which couldn’t possibly care less about anything else. It is more than happy to deny reality and impose high costs and risks on the Middletown stooges; because it knows the huge potential to grift off ratepayers and taxpayers by force-feeding them green eggs and scam. It’s already doing it, in fact. NRG has all the markings of a corporatist hack outfit, not a legitimate business.

As for Middletown’s utopian scheme, you can read the whole farcical thing here. You don’t really need to read much beyond this graph, though: 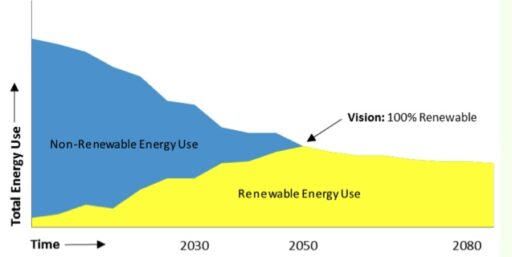 The futility of this scheme is evident in two ways. First, a close look at the chart shows it’s all speculation and the reality is at the far left on the time scale. Secondly, notice it relies upon a more than a 50% absolute reduction in energy use over the next 28 years. This is either a honest—albeit naive and misguided—admission by the radicals of a de-growth agenda or it is a widely unrealistic project. Frankly, it doesn’t matter which, but this delusion is what NRG is happy to tolerate if it can make mucho bucks from solar until the ratepayers and taxpayers revolt.