Misinformation Is Now the Excuse for Government Propaganda

Misinformation Is Now the Excuse for Government Propaganda

Misinformation is what social media companies, in league with Big Government and Big Business, are using as an excuse to peddle propaganda and shut down voices.

Speaking truth to power is out. Shutting down speech that challenges power with claims of misinformation is in. Attempt to speak and someone will arise from within the unholy alliance of Big Government, Business, Media and Tech to shut you down. NaturalGasNOW  is a very small operation and we’ve been mostly accustomed to being missed by the ever present monitors of daily life, but they’re starting to notice us. Alignable has warned us three times that we’re somehow not complying with the amorphous “community standards” they hide behind. More recently, LinkedIn warned us, in its equally muffled way, not to talk too much about CO2. We have offended the speech police guarding the ruling corporatist and government powers.

The LinkedIn complaint we received matters (a little, as we have 7,200 connections on the platform) and here it is: 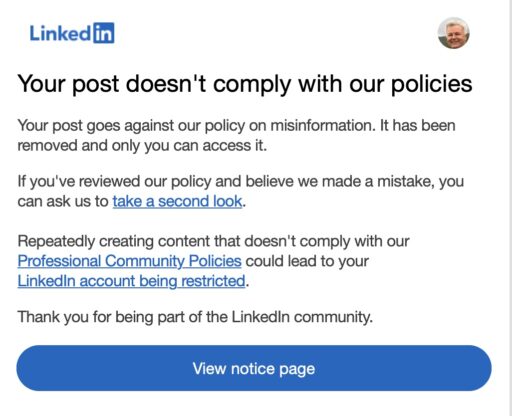 Naturally, I wanted to know what was annoying the anti-speech warriors at LinkedIn, so I clicked the “View notice page” bar and got this regarding our post: 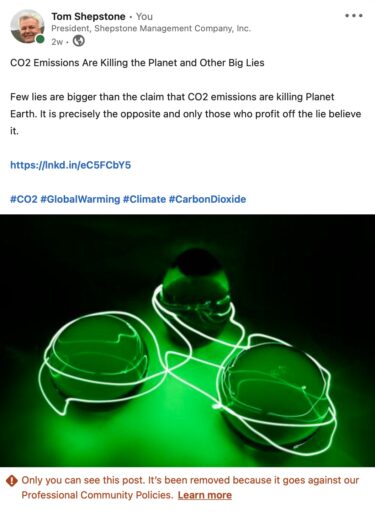 So, again, what was offensive? My title was deliberately provocative, of course, because titles are supposed to be like that. The only real clue I get from clicking “Learn More” is this mush:

I won’t challenge LinkedIn on this because the post already has 65 likes and numerous good comments, so I’ll just assume LinkedIn’s instructions to its computers is to suppress anything suggesting CO2 is not killing the planet. There are, of course, thousands of very reputable scientists who say this, including Obama appointee Steve Koonin, who has written a great book on the subject titled “Unsettled” and notes there is no crisis. Yet, computer programmers at LinkedIn say they know better and anyone with a different opinion must be gagged.

This may seem strange because LinkedIn published a link to my review of “Unsettled” and when the company permanently banned the CO2 Coalition from its platform and I wrote about it, that link was also published. Is the problem that I’m republishing CO2 Coalition stories from time to time? One would guess so, but why does LinkedIn care? The answer is really quite obvious to those who don’t understand the aforementioned anti-speech alliance among Big Government, Business, Media and Tech. They serve each other’s interests because they’re often the same people.

Notice, for example, the fact the LinkedIn policy quoted above specifically cautions against sharing “false information about the safety or efficacy of COVID-19 vaccines” as if the word of government and companies such as Pfizer were undeniably the final word on the subject. This is despite the fact our White House occupant, the head of Pfizer and numerous others who have pushed and mandated the vaccines and have been vaccinated and boosted and reboosted have, nonetheless gotten COVID. I took the first two shots myself and still got what I’m sure was COVID. So, I cannot question efficacy? That’s misinformation? That’s totally ridiculous on its face, as anyone with common sense can attest. Indeed, it’s the most unscientific position imaginable as science is, by definition, a process of questioning.

Yet, we are instructed by the Lords of LinkedIn that we are not allowed to question the government line on COVID or climate. The reason why is apparent when we see who owns LinkedIn. It’s Microsoft, the company built by Bill Gates who is apparently heavily invested in vaccines, an ally of the megalomaniacal goof Klaus Schwab at the World Economic Forum, the U.S.’s biggest farmer and a climate warrior who clearly has his eyes on the trillions to be made off the concept and by getting us all to eat crickets. 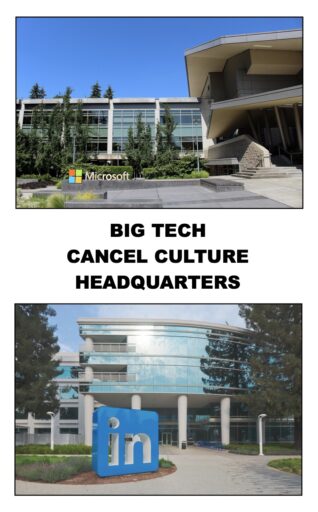 LinkedIn, in other words, will not have us speak truth to power because the power is its owner and the owner’s interests must be protected. The force cannot be challenged. Such is the state of corruption in our institutions today—virtually all of them—as the pursuit of power and money has trumped all other values and virtue has rendered a quaint relic of ancient times. You will take our word or else. You will own nothing and be happy. You will give us your allegiance and do what you’re told. You will not engage in misinformation.