[Editor’s Note: The Mountain Valley Pipeline (MVP) provides an all too perfect illustration of everything that is wrong with our thoroughly corrupted American justice system.]

This post simply reviews an interstate gas pipeline project that is stymied at the Federal Energy Regulatory Commission. FERC has taken a go-slow (as in purposeful delay) regarding the final permits to for water and wetland crossings, creating the controversy for all to see. Mountain Valley politely states (below): 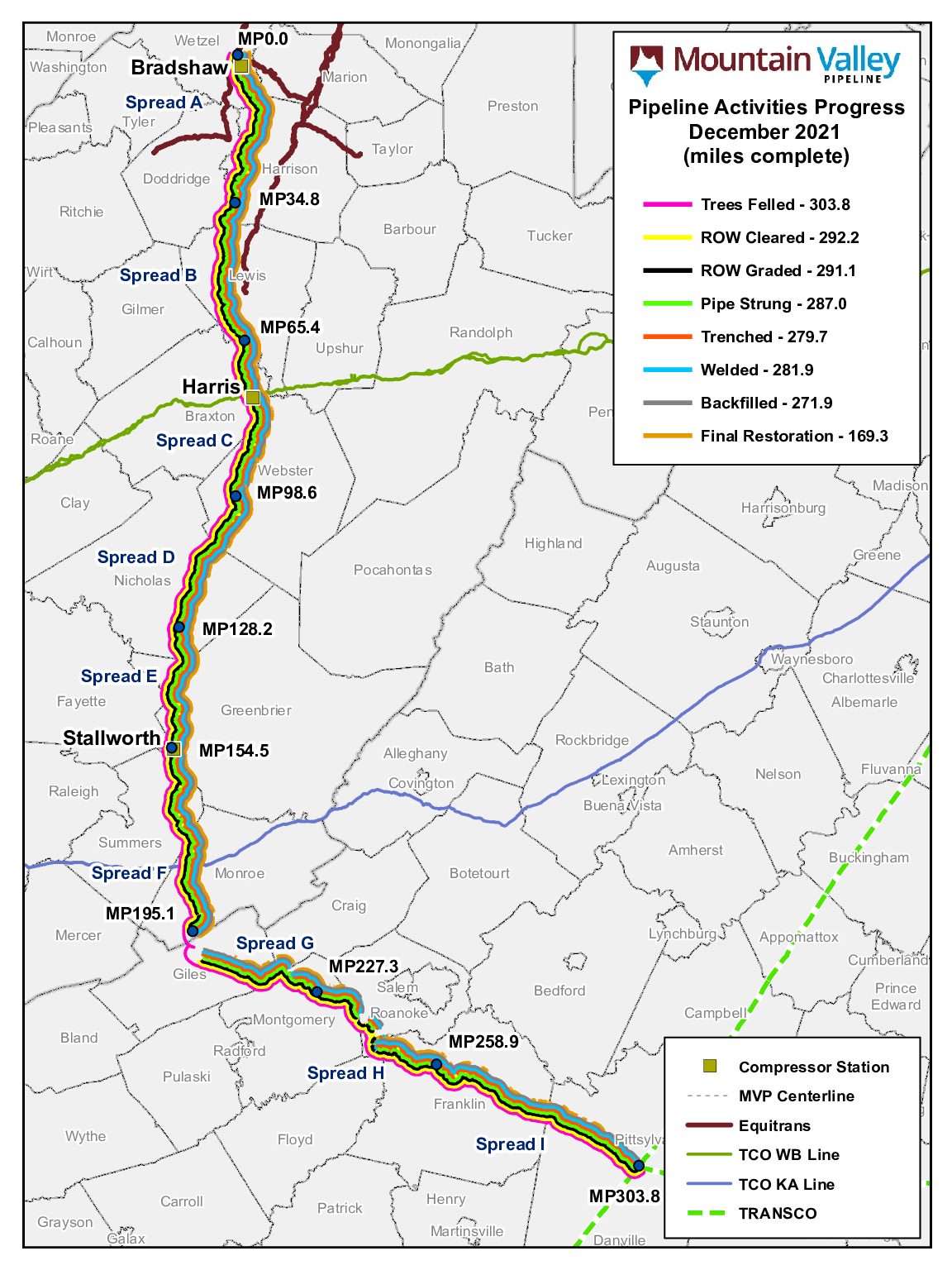 Currently, MVP has all necessary permits with exception of those needed to cross waterbodies and wetlands. The project team is working collaboratively with federal and state authorities on a modified crossings approach, which would use a combination of trenchless and open-cut crossing methods.
This is Biden energy policy in full view.

Currently, MVP has all necessary permits with exception of those needed to cross waterbodies and wetlands. The project team is working collaboratively with federal and state authorities on a modified crossings approach, which would use a combination of trenchless and open-cut crossing methods.
The facts as stated by the company follow.

As proposed, the Mountain Valley Pipeline (MVP) project is a natural gas pipeline system that spans approximately 303 miles from northwestern West Virginia to southern Virginia – and as an interstate pipeline will be regulated by the Federal Energy Regulatory Commission (FERC)….

With a vast supply of natural gas from Marcellus and Utica shale production, the Mountain Valley Pipeline is expected to provide up to two million dekatherms per day [two billion cubic feet (Bcf) per day] of firm transmission capacity to markets in the Mid- and South Atlantic regions of the United States…. As stated in the formal application, Mountain Valley Pipeline has secured firm commitments for the full capacity of the MVP project under 20-year contracts.

The pipeline will be governed by the United States Natural Gas Act, which requires a Certificate of Convenience and Necessity from the FERC before construction can commence. As currently planned, the pipeline will be up to 42 inches in diameter and will require approximately 50 feet of permanent easement (with up to 125 feet of temporary easement during construction).  As proposed, the project will require three compressor stations, with identified locations in Wetzel, Braxton, and Fayette counties of West Virginia. For more information, please visit our FAQ’s page.
Project To-Date

On October 23, 2015, Mountain Valley filed a formal application with the FERC for approval to construct, own, and operate the Mountain Valley Pipeline. The application requesting the FERC Certificate of Public Convenience and Necessity was received and the MVP project was issued Docket Number CP16-10 on November 5, 2015. On September 16, 2016, the FERC issued the Draft Environmental Impact Statement (DEIS) for the MVP project and on October 13, 2016, the MVP project team filed an updated route with the FERC, known as the MVP October 2016 Proposed Route, which reflected numerous route adjustments to mitigate concerns raised during public comment periods.

On June 23, 2017, the FERC issued the Final Environmental Impact Statement (FEIS) for the MVP project. The FEIS considers and includes the analyzed data from civil and environmental surveys that have been conducted, as well as the comments, considerations, and concerns of landowners, community members, government agencies, and located elected officials along the proposed route.

On Friday, October 13, 2017, the FERC issued a Certificate of Public Convenience and Necessity for the Mountain Valley Pipeline (MVP) project. This Certificate follows more than three years of project planning, development, and review; and it recognizes the clear public need for this important energy infrastructure project. The MVP team has worked diligently with stakeholders, including landowners, community members, local officials, and state and federal agencies, to identify the best possible route for the proposed 303-mile underground pipeline.

The Certificate comes after the FEIS, issued in June 2017, which concluded that adverse environmental impacts from construction/operation would be reduced to less-than-significant levels with the implementation of FERC-recommended mitigation measures. The FEIS also noted MVP’s adoption of hundreds of route adjustments, the majority of which were based on various landowner requests, avoidance of sensitive and/or cultural and historic resources, or engineering considerations.

MVP construction began in 2018 after the project secured each of its necessary permits and authorizations. By spring 2021, total project work for MVP was roughly 92 percent complete, which included all work on the project’s three compressor stations and its three original interconnect facilities, with the additional Greene interconnect mechanically complete, as well as roughly 265 miles of pipe welded and in-place, and half of the right-of-way fully restored.

Since the start of construction, industry opponents have continued to challenge MVP’s previously authorized and issued permits through ongoing litigation, placing their specific policy agendas above that of environmental protection and national energy security. These challenges have caused not only delays for the project, but more importantly have caused lengthier, unnecessary disruption for property owners along the route and inhibited MVP’s ability to complete the project and fully restore the right-of-way, which is the best method of environmental protection.

On May 4, 2021, Mountain Valley Pipeline, LLC adjusted its schedule and total project cost for the MVP project. The project team is targeting a full in-service during the summer of 2022, at a total project cost of approximately $6.2 billion. Currently, MVP has all necessary permits with exception of those needed to cross waterbodies and wetlands. The project team is working collaboratively with federal and state authorities on a modified crossings approach, which would use a combination of trenchless and open-cut crossing methods.

As our nation addresses climate change, MVP will play an important role in our transition to a lower-carbon economy, and we are committed to satisfying all regulatory requirements and safely building and operating this important natural gas transmission pipeline.

Editor’s Note: What we are seeing with this project is everything that is wrong with our American justice system, which is approaching 100% corrupt.

We now have a Justice Department and FBI that act no differently than the East German Stasi. We have, too, county district attorneys and state attorney generals funded by George Soros who know their assigned role is to destroy the system from within by turning their departments over to anarchists.

Then, we have gentry elites and special interests funding environmental zealots for the express purpose of killing oil and gas projects through delay so that the biggest grift ever—the Green new Deal—can proceed apace to agglomerate power to themselves power and collect trillions in green rent from ratepayers and taxpayers it views as no more than peasant slaves.

Finally, we have Federal courts so twisted into knots by these elites that no man can secure justice without a dozen years and access to millions of dollars. MVP may have the millions but its investors surely won’t give it the time forever. And, who will suffer? Consumers, landowners, ratepayers, taxpayers, small business—ordinary folks who need  energy, economic development, jobs and opportunities that the MVP will make possible. This is the sad end result of an American justice system that has now been co-opted by elites and turned us ever more into a police state.