Katie Muth and a handful of Democrats conducted a most bizarre press conference yesterday, ending with motormouth drivel from Craig Stevens.

It has to be watched to be believed. It’s that bad. So bad, in fact, that Attorney General Josh Shapiro left the electronic event before it was over, as poor Senator Katie Muth did a valley girl routine of sorts, ending it all by turning to the Allerdyce T Meriwether of fractivism, Craig Stevens, The Mouth, to offer the final pitch as he sputtered and speed-uttered his way through a a very bad novel of his own creation in less than three minutes.

It was supposedly a press conference to announce new Democrat initiative to kill the best thing that ever happened to rural Pennsylvania. The legislation they propose would make the natural gas development that sustained the Commonwealth through hard times totally impractical. What the event really amounted to was an absolutely pathetic demonstration of just how sick the fractivist movement is today as Muth and Mouth Disease has apparently completely infected certain parts of the Democrat party.

The press conference was digital, of course, nothing if not politically correct. You can watch the whole thing here, courtesy of Katie Muth, who so obviously didn’t have the vaguest idea of what she was talking about. Watch the whole thing, please, to grasp the pitiful nature of what the four Democrat senators and their buddy Josh Shapiro had to say as they drug out lies from a decade ago. It is an exercise in perfecting the art of spitting into the wind.

You only need to know the parties involved in this fiasco to appreciate its buffoonery.

First, there was Senator Steve Santarsiero who, he proudly informs us right off the bat, represents a district “entirely within Bucks County,” which has a per capita personal income almost $18,000 and 31% higher than the rest of the Keystone State. It is home to Bruce Wallace and other leisure class artists, of course.

Wallace, whose primary goal in life seems to be ensuring a bridge doesn’t get rebuilt, thereby improving his privacy at the expense of his greatly affected neighbors on the opposite side of the stream, was Santarsiero’s top donor in 2018 when he first got elected to the Senate. Santarsiero had been a state rep, ran for Congress in 2016 and lost, He was then given a 9-month appointment by Josh Shapiro to a Deputy Attorney General position that served as cozy place to work while waiting for the opportunity to run for the Senate.

Shapiro spoke next, apparently dropping off the video conference as soon as he was done. He had nothing new to say, of course. He was merely campaigning for governor, demagoguing on an issue he knows will resonate with one of the two wings of the Democrat party — the broken extreme left wing. Shapiro has completely politicized his office in his quest to lay the groundwork for his run and the only question here is whether he initiated this phony news conference or Katie Muth did so. Given the way he dropped off the call and the fact Katie Muth is the one making a big deal of it, one can conclude he might well be the one to have been used in this instance.

Senator Maria Collett is also a first time Senator representing part of Bucks County and some of adjoining Montgomery County, which has even higher personal income ($24,000 and 41% higher than the state). Born in Greece, she was first a lawyer and a later a nurse by profession. Roughly a quarter of her donations came from Fairness Pa PAC, which is described as “a channel for doctors and lawyers who own pharmacies to put their campaign cash to use.” She also got big money from trial lawyers and public employee unions. She, too, had nothing of interest to say.

Interestingly, Senator Collett renewed her status as an attorney in 2020 and she’s now “of counsel” to the same law firm, Rudolph Clarke LLC, as Santarsiero. Indeed, the firm has five such “of counsel” attorneys — two senators and three representatives — all of whom are Democrats. How convenient for peddling influence.

Senator Carolyn Comitta was yet another speaker with nothing of substance to offer. She is a teacher by profession but also serves as Vice President and Chief Financial Officer of her husband’s town planning firm in Chester County, Thomas Comitta Associates. She is also a board member of a very strange non-profit called World Information Transfer, Inc., which promotes “sustainability” (code for zero growth and all sorts of socialistic policies) and “sustainable energy” (code for green eggs and scam). She replaced Absent Andy Dinniman, who announced his retirement last year and her top donors are public employee unions.

Katie Muth, of course, is already known to our readers from a post I wrote last year, where I noted this:

She has a background in athletic training and sports medicine and has been an adjunct professor in kinesiology, which is “the scientific study of human or non-human body movement” or so Wikipedia tells us. It’s apparently a college version of “Dem Bones.”

Katie got the political bug in 2017 when she formed and chaired something weirdly called “Indivisible Mid Montco” a far left Action Network group dedicated to “resisting the Trump agenda by grassroots activism on the local level.” Now, she’s a state senator from Montgomery County looking to milk the Mariner East pipeline opposition for political support and she’s just proven she doesn’t know a fracking thing about the subject.

Katie Muth made my final statement about her explicitly clear on yesterday’s call. She fumbled, she mumbled and she grumbled, offering nothing but yesterday’s lies, apparently passed along by local fractivists of no credibility whatsoever. Here’s one of them it seems. He somehow got in on the “press conference” and was allowed to make a statement at the end, which was about as embarrassing as it could possibly be. Indeed, here is how The Mouth appeared: 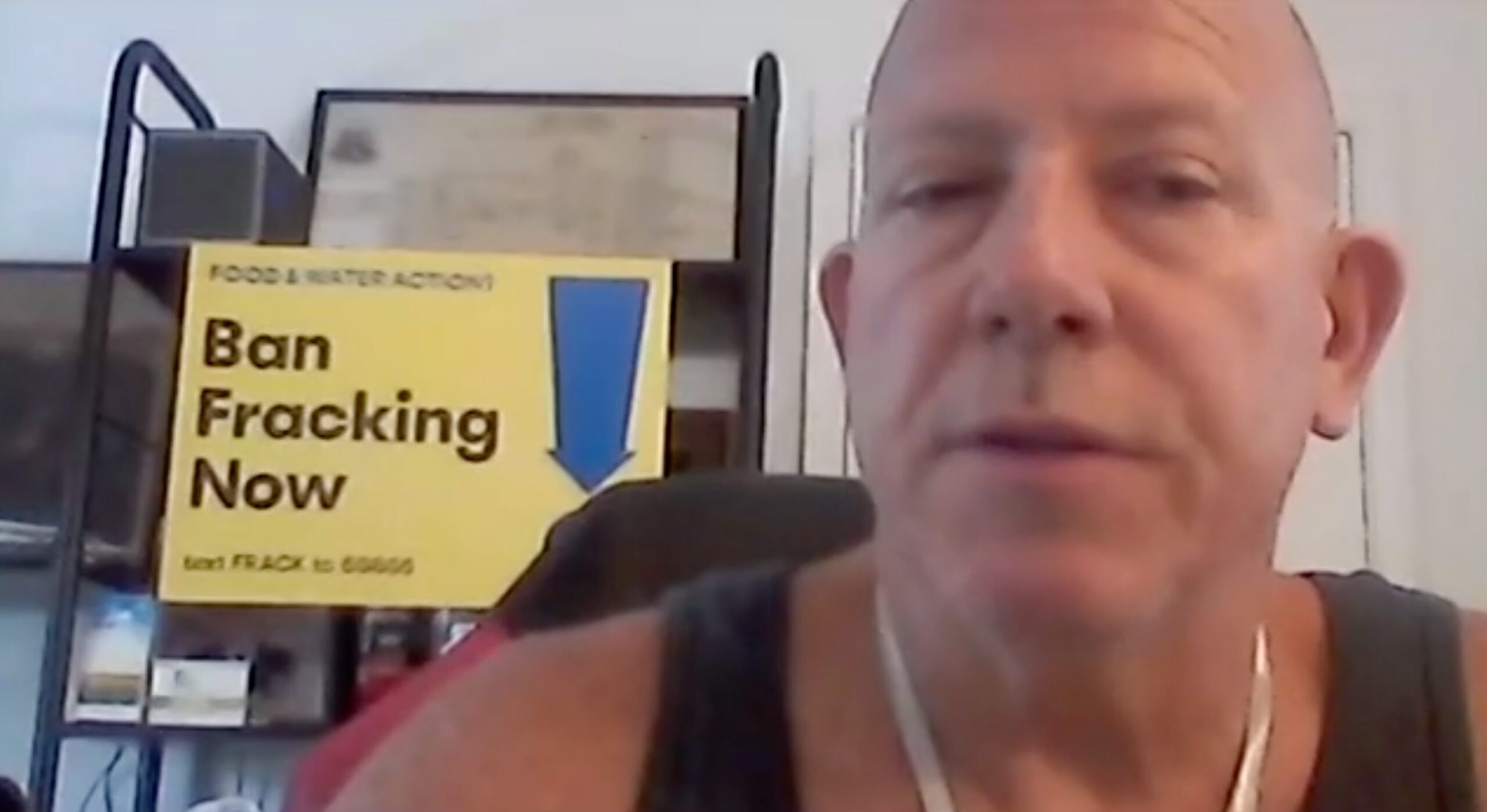 Notice the tank top. Notice the gold chain. Notice the “Ban Fracking Now” prominently displayed in the background, which gives away the entire agenda of these four first-term Democrat senators and their wanna-be progressive governor, the Commonwealth’s most political attorney general ever, Josh Shapiro. They tell us their proposed legislation is all about reforms to quintuple setbacks from buildings, make sure wells are almost mile from any school and disclosure of chemicals already disclosed on FracFocus. But, it’s really about effectuating a ban as The Mouth discloses with his sign.

And, notice whose sign it is; that of Food and Water Watch, the same outfit that used him as its paid shill to trash the industry on behalf of gentry class special interests. Read all about that revelation here. You won’t be disappointed. It’s amazing anyone at all is still taking this fellow seriously but I guess if you’re a first term Democrat Senator it goes with the territory.

What’s equally amazing is that only three people other than The Mouth joined the “press conference to ask questions. Only one was a real journalist and that was Cody Butler of WBRE and WYOU Eyewitness News who asked how to follow up on Katie’s assertion of massive problems at a Cabot site that isn’t backed up by DEP violation records.

The other two questioners were, Rachel McDevitt of the fractivist freak show outlet StateImpactPA, which is but a sister entity to the radical Delaware Riverkeeper and Jake Conley of the “Public Herald.” The latter doesn’t even qualify as a news outlet and Jake Conley is but a student intern for what is nothing more than a trial lawyer outlet that employs part of the family to self-promote as a law firm and advance an agenda designed to rain lawsuits. Read about that ruse here, here and, especially, here.

Yet, as ridiculous as this whole thing yesterday was, you just now some supposedly legitimate news source is going to pick up on this story because they’re either lazy, biased or both. That’s the seemingly unending battle with which we must deal, yet the facts tell us there has been no discernible affect from natural gas development on stream water quality in the Susquehanna River Basin and something tells me there will, eventually, be an end to Muth and Mouth Disease. It may have invaded the Capitol but not the rest of Pennsylvania.

Still, here’s the problem; these first-term senators haven’t got a clue and, although our readers know the story, many others do not. They don’t remember the purple squirrel episode, the green scum tour stop, the black lesioned bass hype or the weapons-grade uranium tale. Therefore, over the next several weeks we’re going to revisit the top 10 fracking lies Josh Shapiro and his gang of naive political neophytes are recycling. Stay tuned as we take you back in time to the fractivist dustbin of history.