Katie Muth, the State Senator from Southeast PA who wants to speak for Dimock, lost out at the Environmental Hearing Board and her attorney was sanctioned.

Back in March of this year, I wrote a lengthy post suggesting why no one today longer trusts any of our major institutions. I used Chris Heinz and State Senator Katie Muth as examples fro explain. noting she had, for some peculiar reason, started worrying about Dimock, which is one heck of a long way from her district in Southeast Pennsylvania. Katie was then trying to halt the plans of Eureka Resources, LLC to recycle wastewater generated by Coterra Energy under a DEP permit and had filed a challenge with the Environmental Hearing Board.

I further noted there was something very curious about Katie Muth’s case. She was using a comparatively unknown attorney by the mame of Lisa Ann Johnson from Wexford, Pennsylvania (near Pittsburgh) to represent her. I asked why a State Senator from Southeast PA would use an obscure attorney from the other side of the state in Southwest PA to represent her in a case in Northeast PA and opined there was “something exceedingly strange about this.”

I still don’t have the total picture as to who pays Lisa Johnson, for instance, or exactly why Katie Muth was using her for legal counsel, but I do have a much better understanding of just how the two of them used the system. That’s because the Environmental Hearing Board just issued two fascinating opinions; one dismissing a Muth challenge and the other sanctioning her attorney. 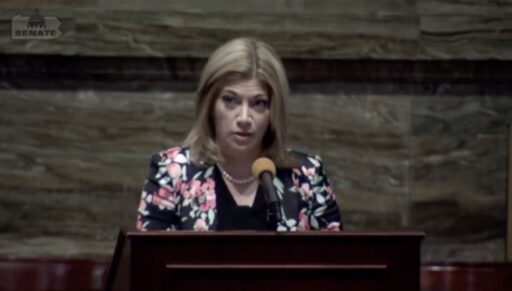 The first opinion involves a lawsuit brought by Lisa Johnson on behalf of Senator Katie Muth challenging the DEP permit issued to Eureka Resources, LLC by the Department of Environmental Protection for the aforementioned wastewater recycling facility in Susquehanna County. It was a blowout and here are the relevant excerpts:

Senator Muth claims standing on behalf of residents who live and work in the area of the proposed discharge, as a trustee under Article I, § 27 of the Pennsylvania Constitution, and in her own individual capacity.

Included with her Notice of Appeal and Response to Motion to Dismiss are numerous affidavits signed by individuals who reside in the general area of the proposed facility who have set forth their objections to the granting of the NPDES permit… Additionally, paragraphs 28 through 33 of the Amended Notice of Appeal detail the specific concerns of two residents of Dimock and Susquehanna County, Victoria Switzer and Matt Neenan. Neither Ms. Switzer nor Mr. Neenan have appealed the Department’s issuance of the NPDES permit. Nor have any of the residents who provided affidavits to Senator Muth filed their own appeals.

We conclude that Senator Muth does not have representational standing as a state senator to bring this appeal on behalf of residents who live and work in the area of the proposed facility.

Senator Muth asserts that she has not brought this appeal as a legislator, but as a trustee under Pennsylvania’s Environmental Rights Amendment.

Senator Muth states that she has brought this appeal, not as a legislator, but as a trustee on behalf of Pennsylvania residents “all of whom are beneficiaries under the Environmental Rights Amendment and all of whom allege impact.”

…Although Senator Muth states that she has not filed this appeal as a legislator, her claim of trustee status under Article I, § 27 is based on and derivative of her position as a state senator…

We conclude that Senator Muth does not have standing to bring this appeal as a trustee under the Environmental Rights Amendment of the Pennsylvania Constitution.

The EHB stated Muth could try to convince them to give her standing as an individual but had not yet done so and firmly rejected her appeal as a State Senator. Her case in that regard was dismissed, her attorney, Lisa Johnson accomplishing nothing more than a delay in development of this wastewater treatment facility.

Was that the objective? One wonders because Lisa Johnson, Muth’s attorney, also brought a case against Coterra Energy over supposed water quality issues on behalf of Tonya Stanley and Bonnie and Jeffrey Dibble. The second opinion issued by the EHB had to do with her behavior in that case, behavior which caused Coterra to request sanctions against Lisa Johnson. Here are the startling excerpts, bearing in in mind this is who Katie Muth asked to handle her case:

The Board grants an Intervenor’s motion for sanctions in the form of legal fees seeking to recover reasonable fees incurred as a result of a baseless motion to stay proceedings filed by counsel for the Appellants. The motion was submitted in bad faith and for the improper purpose of causing unnecessary delay and a needless increase in the cost of litigation. The motion is also the latest example of counsel’s pattern and practice of harassing opposing counsel. The motion also violated counsel’s obligation to show candor to the Board by basing the request for relief on a demonstrably false statement…

bad faith, harassment, unwarranted delaying tactics, and outright lying to the Board and opposing

counsel, not to mention highly disrespectful, unprofessional conduct in general, compels us to

impose a sanction in this case…

In order to understand why we are granting sanctions for a bad faith motion for a stay, it is necessary for us to provide the background and context that predated its filing. We want to emphasize that a motion for a stay or a request for an extension will not ordinarily warrant the imposition of sanctions in any but the most egregious circumstances. However, we believe those circumstances are present here, where the motion for a stay was merely the latest iteration in a series of filings from Lisa Johnson and the Appellants that appeared to have no purpose other than to delay our proceedings, increase litigation costs on the Department and Coterra, and avoid in any way possible going to the scheduled hearing on the merits. This appeal should have been a relatively straightforward water loss and contamination case. Whether the case had any merit will never be known because Johnson’s conduct has precluded us from ever coming close to a decision on the merits, which is extremely unfortunate for her clients…

On January 19, the Appellants filed their pre-hearing memorandum. (Docket Entry No. 99.) Their memo did not identify or attach any exhibits. For example, no sample results from the Appellants’ water supply were attached. It is, of course, nearly inconceivable that an appellant could prove a claim of water contamination without any sample results to back up the claim. 5 The memo listed several fact witnesses, but no expert witnesses. With respect to expert witnesses, the Appellants asserted experts were not necessary…

Cutting through all this noise, we went forward with the already delayed hearing on February 22. At the beginning of the hearing, Lisa Johnson demanded that, instead of proceeding with the hearing, “we argue the response to Coterra’s motion for sanctions and legal fees.” When the presiding judge said he would not rule on the motion one way or the other that day, Johnson moved “to take a recess for the parties to read the response, and we can reconvene.” The presiding judge denied the motion to recess.  Johnson then requested a 15-minute break and, after returning, refused to put her clients on to testify (her only witnesses) and be subject to cross-examination, claiming that “the sole intent of the motion for sanction [sic] and legal fees that Buchanan and Coterra filed was to somehow deter my clients’ free testimony today.” However, importantly, Johnson acknowledged that, even if the motion for sanctions were not on the table, she would not have put her clients on the stand subject to cross-examination…

It is unclear whether the Appellants ever intended to actually proceed to a hearing on the merits. When viewed in conjunction with Johnson’s actions over the course of this appealconducting no discovery, filing motions for summary judgment with no record support, failing to file a pre-hearing memorandum on time, baselessly claiming our appeal was stayed by reason of a filing to the Commonwealth Court, moving the Commonwealth Court to stay our proceedings (where the motion and attempted appeal were immediately denied), filing a pre-hearing memorandum (as supplemented) with no substance, failing to file an appropriate response to Coterra’s motions in limine, and refusing to put on any evidence or testimony at the hearing on the merits—it seems obvious that the motion to stay was filed to avoid having to go to a hearing and thus to cause unnecessary delay in our proceedings.

The Appellants’ motion was not an isolated incident. Rather, it was merely the latest in a series of actions unquestionably designed in bad faith to harass, attempt to cause unnecessary delay, and needlessly increase the cost of litigation. By her words and deeds, Johnson’s bad faith is palpable. Accordingly, we are compelled to find that Lisa Johnson’s motion to stay was filed “for an improper purpose” to “cause unnecessary delay or needless increase in the cost of litigation” and she therefore committed a “bad faith violation” of 25 Pa. Code § 1021.31(b) that warrants the imposition of appropriate sanctions. Coterra’s request for reasonable fees that are a result of having to respond to the improper motion is an appropriate sanction.

Whoa! That hurt! So, once again, we’re left with two questions. First, why did Katie Muth use this particular attorney? Secondly, who paid for her work? Did Katie Muth? Or, did some other entity do so? Regardless of the answers, this is the world oil fractivist opposition that Katie Muth has entered and it’s not pretty.