I thought it might be fun and illuminating to look back 100 years ago at what was happening with natural gas. It is eye opening, given all we’ve learned over the last century. There is, indeed, little new under the sun, as our stories repeatedly demonstrate. Natural Gas – 100 Years Ago Today, December 16, 1922. Read our 100-year old news items on the subjects of negative advertising, negativism, Bolshevik thievery, investors sought and a blessing.

Well, this is an interesting way to sell a product, by telling others to try imagining their lives without it and having to depend on the alternatives. Negative advertising? Yes, it’s not just for politicians. Well, there’s still a Lone Star Gas Co., so perhaps it worked for natural gas, too.

The danger of negativism, though, is evident in this short-sighted article, isn’t it? 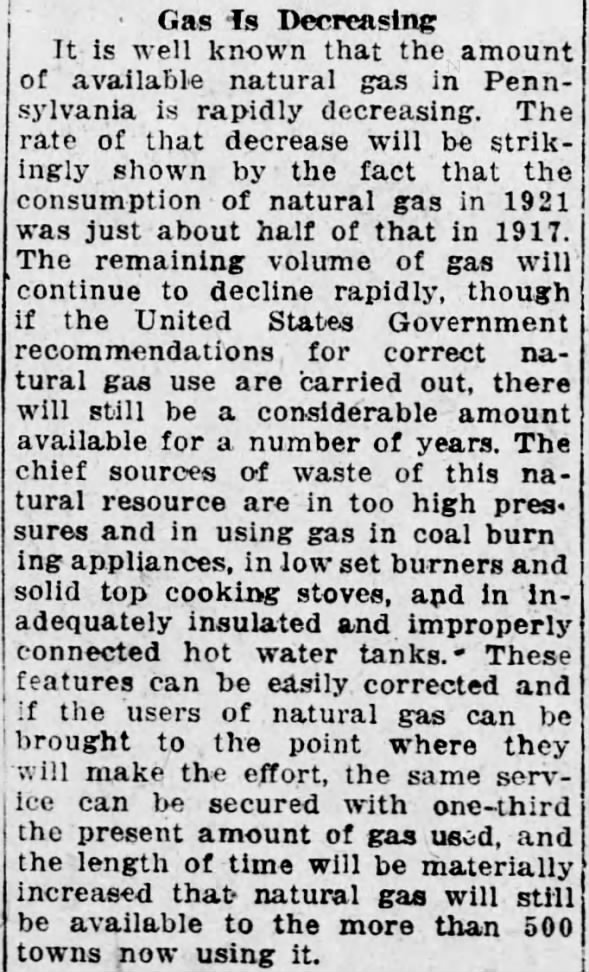 As it turns out, of course, there is much more natural gas than anyone ever supposed. Nonetheless, negativism is still with us isn’t it? There is always someone supposing we’ll run out or that we’ll kill the planet if we keep using it. And, there always will be, but the laws of economics ensure we won’t run out while George Carlin assured us the planet will do just fine. Moreover, he did so in 1992 when only three years earlier Noel Brown, director of the New York office of the U.N. Environment Program predicted “entire nations could be wiped off the face of the earth by rising sea levels if global warming is not reversed by the year 2000.”

A Bolshevik Mayor in Oklahoma?

This incredible story got massive attention in the press throughout the south in 1922:

Just amazing. Prairie justice or Bolshevik thievery? Well, the Mayor opted not to seek re-election so take what you will from that.

This is apparently how natural gas investors were sought a century ago:

One must admit there is something appealing in the simplicity of the way business was done back in the day.

The simplicity of this little blurb is even more appealing: