I thought it might be fun and illuminating to look back 100 years ago at what was happening with natural gas. It is eye opening, given all we’ve learned over the last century and, of course, there is little new under the sun. Consider these news items (emphasis added): 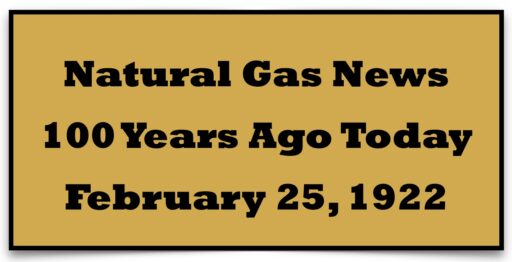 First up among our historic reflections on natural gas this week is this 100 year report from the Charlotte Observer on the government’s reaction to the Roma dirigible disaster:

That was the big news in every paper across the fruited plain on February 25, 1922 but there was this little story in the El Paso Herald about drilling more than 5,000 feet down into shale for natural gas, which was prescient, to say the least, as to where natural gas would come from in the future.

And, the Richmond Item takes us backward 28 years to note natural gas had already made big headway in that state.

We also learn of an outfit called the “New York Oil Company,” which apparently had been active in Western New York State (hard to imagine today) that had spread its wings to pursue oil and gas development in Wyoming.

Amazing isn’t it? New York, which still has oil companies, has today turned its back on the industry. It has decided it’s more important to pursue an idiotic “save the planet” agenda and let its pioneering oil and gas industry suffer the consequences. This is what happens when a state becomes so urbanized as a whole that its rural producers who actual know to develop oil and gas, grow crops and make things are treated as deplorables and know nothing elites and other city dwellers make all the decisions.