I thought it might be fun and illuminating to look back 100 years ago at what was happening with natural gas. It is eye opening, given all we’ve learned over the last century. There is, indeed, little new under the sun, as our stories repeatedly demonstrate. Natural Gas – 100 Years Ago Today, January 13, 1923. Read our 100-year old news items on the subjects of no muss-no dirt natural gas, stick twirling, losing money and a moonshine recipe.

Natural Gas Is “No Muss – No Dirt”

Don’t you love the art work on this one? 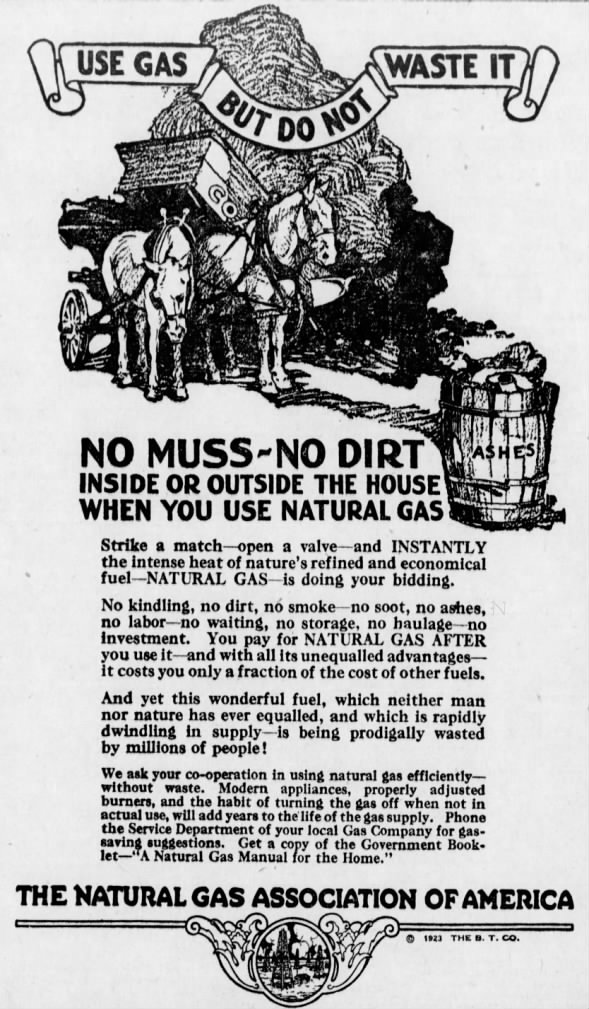 There was something very simple and appealing about advertisements a century ago. They were bolder, less slick and to the point, as compared to modern advertising and PR, both of which are nothing but slick, vacuous and often fundamentally dishonest.

Twirl A Stick and Light A Fire? Or, Natural Gas?

The people at “The Peoples Natural Gas Company” were also always clever, of course:

Would anyone dare publish this ad today? Or, as is more likely, would political correctness scare editor’s out of it? You be the judge!

When You Can’t Make It Up in Volume

This distribution was pretty outspoken about its need for higher gas rates to survive:

What this ad reveals is the basic nature of commodity businesses. Ask any dairy farmer. There will always be losses that have to be made up when times are good. And, ultimately, the only way to survive is to continually lower costs of production. Southwestern Gas & Electricity apparently learned that, as the company still operates as part of a larger operation.

And, Then, There’s Moonshine

This little commentary, too, might as well be an advertisement:

I’m as big a natural gas fan as anyone, but…