I thought it might be fun and illuminating to look back 100 years ago at what was happening with natural gas. It is eye opening, given all we’ve learned over the last century. There is, indeed, little new under the sun, as our stories repeatedly demonstrate. Natural Gas – 100 Years Ago Today, October 21, 1922. Read our 100-year old news items on the subjects of keeping homes warm, wells on fire before Josh Fox, industry peace and from Amarillo by morning.

Keeping warm was very important to most folks 100 years ago and still takes precedence over global warming today. Interestingly, this New Castle energy company was saying then what ought to still be observed; having alternatives to keep warm when things go awry. He who lives in an all-electric home and depends on sun and wind to make the electricity might want to bear this lesson in mind.

Yes, natural gas is the reliable fuel today but, in an age when New Englanders refuse pipelines needed to deliver it so they might keep warm this winter, this century old warming is particularly poignant.

Before Josh Fox’s Lying Gasland, There Was This!

Yes, natural gas was in the water of the Southern Tier of New York long before even Josh Fox’s parents were born. 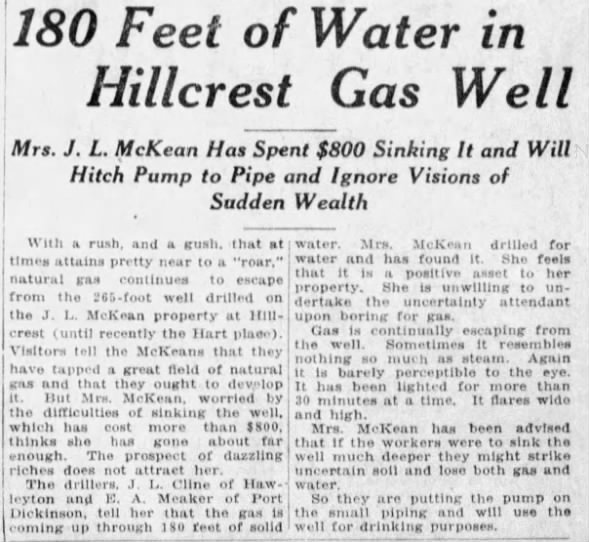 Consider how much damage Josh Fox rendered by perpetuating his big lie that fracking put natural gas in water wells. Don’t think too long about it, though, or you’ll go insane wondering how our culture has so deteriorated that such nonsense—such fake news—could take such root for so long.

Neither war nor peace was easy for the natural gas industry (or anyone else) but while what was lost was tragic, the effort was necessary and an enormous debt is owed to those who made victory possible during and after the Great War.

Notice, too, that adaptation was the key then and always is in the natural gas and oil industry.

From Amarillo By Morning?

Natural gas pipelines were among the great works of man a century ago and should remain so if we value our energy independence and security.

Of course, no country music fan can see the word Amarillo without thinking of this All-American song: