Natural gas is a major force in the economy of Northeastern Pennsylvania, especially in the Endless Mountains counties of Bradford, Susquehanna and Wyoming!

The phrase “in these uncertain times” has shifted this year from the mysteries surrounding the COVID pandemic to where our economy is going. But, despite not knowing when inflation might slow down, those of us in the energy sector are certain of one thing: Natural Gas Production continues to drive the economy in numerous ways, especially as it pertains to providing employment and family-sustaining wages.

Teri Ooms, executive director at The Institute for Public Policy & Economic Development at Wilkes University, has produced several reports that show just how vital the energy industry is to the region’s economy, including new statistics that prove that energy jobs and wages remain strong in a fluctuating economy.

According to numbers released at the beginning of August, the average annual wages of employees in 11 northeast Pennsylvania counties involved directly with natural gas extraction averaged $124,531, while those engaged in businesses that provide crucial support for oil and gas operations were earning an average of $91,702 – both well above the combined average of all industries at $49,410. The Institute for Public Policy & Economic Development at Wilkes University

With the help of local economic experts, we decided to take a closer look at the three counties from the Endless Mountains Region of Pennsylvania that play the biggest roles in the Marcellus Shale – Susquehanna, Bradford, and Wyoming. We also looked at employment rankings from the PA Department of Labor & Industry. 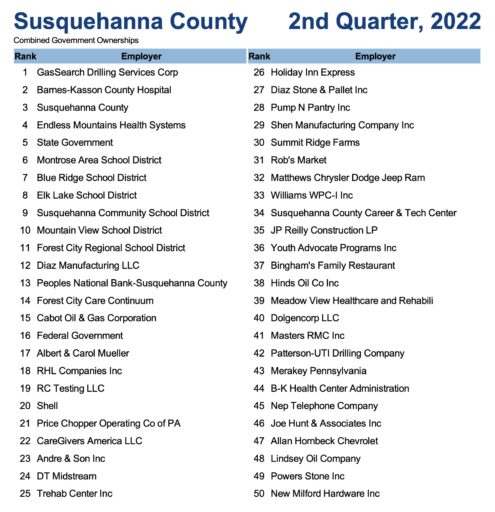 In Susquehanna County, six companies directly or indirectly involved in natural gas production were among the top 50 employers in the second quarter of 2022, with GasSearch Drilling Services, a wholly-owned subsidiary of Coterra, securing the No. 1 spot and Coterra itself, which relies heavily on other local contractors on the list, at No. 15. 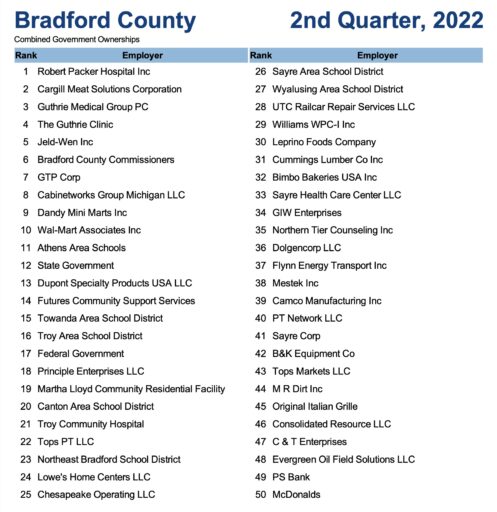 “I think that things are at a very comfortable level,” said Tony Ventello, executive director of the Progress Authority, which promotes economic development in Bradford and Susquehanna counties. “I see a lot of activity going on.” 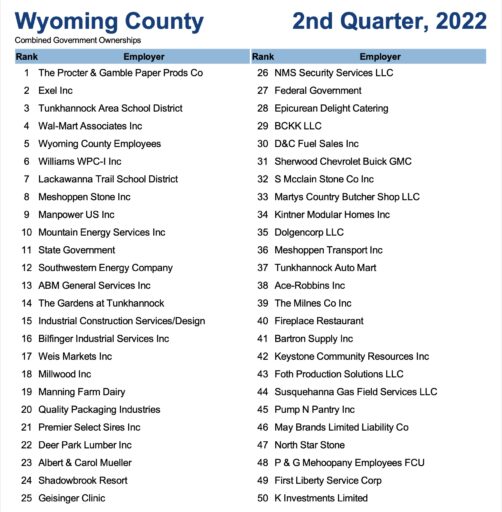 Williams has a strong presence in all three counties, leading the energy sector list in Bradford and Wyoming counties, landing the No. 6 spot overall in the latter. Southwestern Energy Company with headquarters in Wyoming County is at No. 12 there. Support companies, such as Mountain Energy Services and Susquehanna Gas Field Services are also consistent employers in Wyoming County.

“The natural gas industry’s support for education and community resources help to sustain our economy,” said Wyoming County Chamber of Commerce president Gina Suydam. She cited the new Lackawanna College School of Petroleum & Natural Gas in Tunkhannock, a town viewed as a gateway into the energy sector from Wilkes-Barre and Scranton, as an example. “With financial support from many companies in the gas industry, the college can train the area’s workforce in high-priority, high-paying jobs.”

The Chamber was instrumental at bringing natural gas into the county seat via UGI in 2018. “Natural gas service increases home values and energy efficiency in our local businesses,” Gina offered. “In 2020, more people moved to rural areas and looked for these utilities in their homes, and our rural community is poised for growth in residents and business.”

“Using it here” is also one of Tony’s mantras, but that’s where he also sees the biggest room for improvement. “I still believe that the most critical piece to this is that, if we want natural gas to be a part of a stable economy, we need to work on vertical integration and incentivise adding value to the gas before it leaves the area.” He compared the potential for production of LNG, CNG, and synthesized fuels within the region to making furniture with lumber or making ice cream with milk rather than sending the raw materials elsewhere for production.

We appreciate the many people like Terri, Gina and Tony for keeping their eye on the prize and spreading awareness that natural gas will be an integral part of the economy of northeast Pennsylvania for decades to come.