Natural Gas Exports Are Our Best Weapon in the Trade Wars

Some statistics from the EIA demonstrate just how valuable natural gas exports stimulated by hydraulic fracturing are to addressing the America trade deficit.

Trade deficits, while they can be argued to benefit Americans by allowing goods we need to be produced where this can happen most efficiently, also deprive our people of the opportunity to earn a living producing those same goods here. Trade deficits also make us vulnerable to foreign dependency and risk when the suppliers are enemies such as China. Trade wars are, therefore, a reality at some level even if we all believe, as I do, that free but fair trade is the most desirable ultimate outcome. We have to use our leverage on one side of the equation, in other words, to ensure fairness on the other side and natural gas exports are our best single source of that leverage. 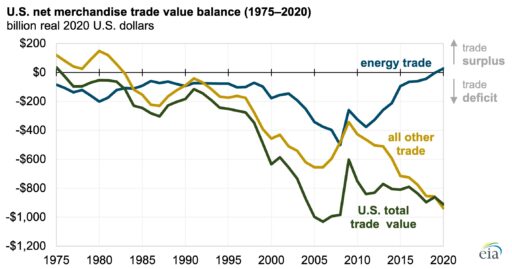 In 2020, the U.S. net merchandise trade value of energy products—the value of petroleum, natural gas, coal, and electricity exports less the value of their imports—was a surplus of $27 billion. This amount marks the first time the value of U.S. energy exports exceeded imports since at least 1974, the earliest year in the U.S. Census Bureau’s trade value data.

Petroleum accounts for the vast majority of U.S. energy trade: 92% of import value and 74% of export value in 2020. The net U.S. petroleum trade value deficit peaked in 2008, but it has fallen over the past decade as volumes of U.S. petroleum exports increased to record-high levels and imports decreased. The 2020 net U.S. petroleum trade value deficit was $3 billion, the smallest on record, partially because of less consumption amid COVID-19 mitigation efforts. In our latest Short-Term Energy Outlook, we forecast that the United States will continue to import more petroleum than it will export in 2021 and 2022.

Natural gas accounts for an increasing share of the U.S. energy trade, and it accounted for 5% of energy import value and 22% of energy export value in 2020, resulting in a surplus of $26 billion. Volumes of U.S. natural gas exports reached a record high in 2020, and they have continued to increase in 2021. Through the first six months of 2021, the United States exported record volumes of pipeline gas to Mexico and liquefied natural gas (LNG).

Coal and electricity account for relatively small portions of the energy trade value. The United States has been a net exporter of coal volumes since at least 1949 and a net importer of electricity since 1969.

The data is simply incredible. Natural gas exports accounted for a $26 billion trade surplus in trade of this product, compared to a $27 billion surplus in the value of all petroleum, natural gas, coal and electricity traded. This means, for those of you who might be radical politicians from New York State who don’t grasp energy economics, that natural gas exports generated via hydraulic fracturing in places along your border such as Susquehanna County are responsible for 96% of our US energy trade surplus! And, that energy trade surplus is offsetting trade deficits in other categories. Natural gas exports, in other words, are producing valuable jobs here at home even as China uses slave labor to undercut our workers manufacturing other goods.

How sweet it is!