The increased use of natural gas in power generation has grown significantly, while at the same time, carbon intensity has fallen, new data from the U.S. Energy Information Administration (EIA) shows:

“From 2016 to 2020, the carbon intensity of U.S. power generation fell 18 percent, driven by a shift in the U.S. electricity generation mix away from coal and toward natural gas and renewables.” (emphasis added)

A more detailed look at EIA’s data – which Energy In Depth obtained earlier this year – showed that natural gas has been responsible for nearly double the power sector emissions reductions as non-carbon sources of power generation, which includes renewables and nuclear, over the last decade-plus. 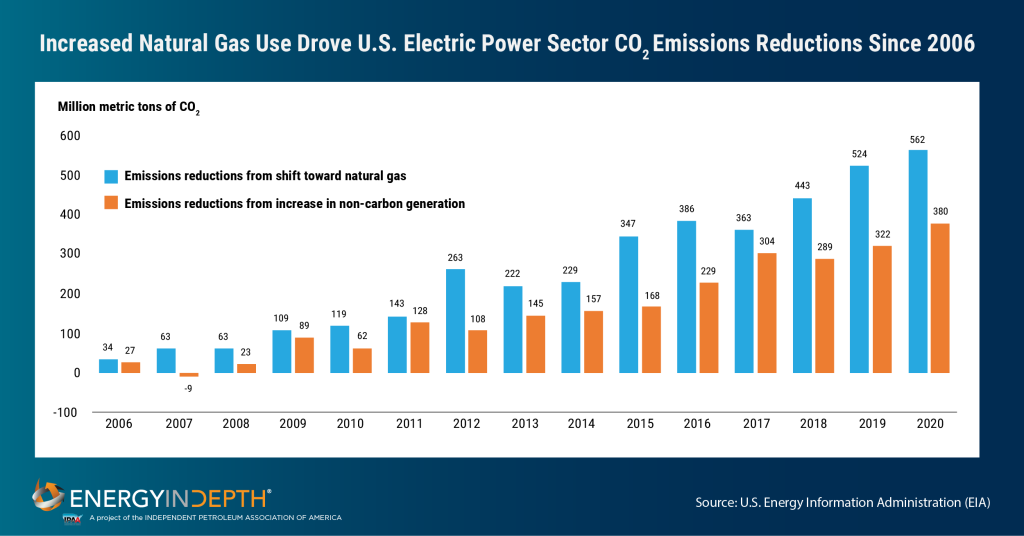 In fact, in 2020 alone, the shift to natural gas provided an emissions reduction of 562 million metric tons of CO2 (MMT CO2) – or the emissions equivalent of 150 coal-fired power plants operating for a year. That’s 182 MMT CO2e more than non-carbon sources of power generation in 2020.

The report further details that the vast majority of states across the country are experiencing lower emissions in the power generation sector, from the Marcellus and Utica Shale of West Virginia, Pennsylvania, and Ohio, to the Anadarko and Haynesville basins of Texas, Oklahoma, and Louisiana.

“All but seven U.S. states decreased their carbon intensity over that five-year period.”