Natural Gas Industry Participates in Fish for the Fallen Tournament

Natural gas industry employees joined veterans and first responders in the Fish for the Fallen tournament at Patriots Cove for a fun day of fishing.

We were absolutely honored to sponsor the Fish for the Fallen tournament again this year. However, we were equally as excited when Team Cabot won the event! The fishing camp and retreat in lower Wyoming County is one of our favorite places to visit, as well as support. Proceeds from the fishing tournament help founders Jeff and Melissa Swire conduct programming throughout the year for veterans and first responders with disabilities. 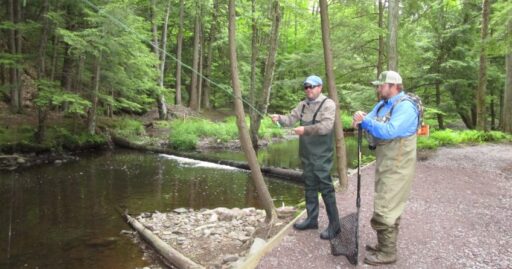 Seven teams of two anglers and a fly-fishing guide moved up and down Beaver Run to try their luck. Each section is accessible via wheelchairs and equipped with all-terrain trackers. We encouraged employees from GasSearch Drilling Service (GDS) and Kozlowski Oilfield Support to take part in the event this year. And, as luck would have it, our good friend Chad Johnson from Williams Companies was their guide.

While Chad is neither a veteran nor first responder, he has taken a sincere interest in the programming offered at Patriots Cove and has seen first-hand the joy these activities bring to program participants.

“What Jeff and Melissa are doing here – giving back to the veterans – is everything,” Chad remarked. “They are so energetic about everything that they do, you can’t help but be inspired by it all.”

Chad Gorman of GDS took a plunge earlier in the day landing a 21-inch tiger trout. He saw the tournament as a way to learn about the program, talk to folks, and promote GDS. “We have job openings all the time,” he noted. “If there’s any way I can help these guys out, I will.”

Ed Kozlowski, owner of Kozlowski Oilfield Support, enjoyed the beauty of Patriots Cove. He loved the idea of fishing on behalf of a veteran or first responder. He added, “I’m glad to see such good things are happening here.” 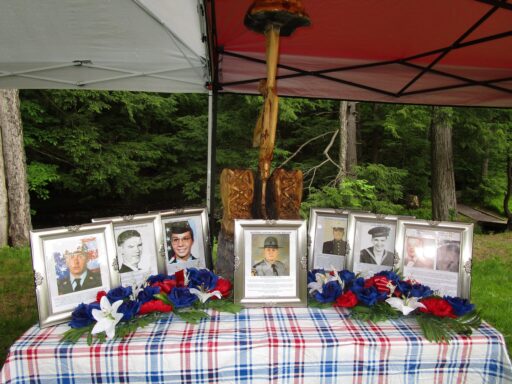 Meanwhile, Ken Bach of Auburn Center was working with fishermen Dale Gow of Nicholson and Ben Ryon of Factoryville as Team Earth Armor. Ken is a Vietnam veteran who has always assisted with the derby. Ben was competing for the second year in a row and helps spread the word about the program. “They do great things for the veteran community, and they provide us access to this site and get us outdoors,” he remarked. Team Earth Armor finished in second place for the day.

Coming in third in the fishing tournament was Team Amp Global, lead by guide Keith Lutz of Mifflinville. It was the second year as a mentor for the Marine Corps veteran, but he brings 30 years of fly-fishing experience to Patriots Cove. Helping others there is as therapeutic for him as the angling experience.

“I had a lot of adjustment issues, and this is the first place that I felt at home,” Keith told us. “We don’t want to burden people with or issues or unload on them, so we keep to ourselves. We look for a sanctuary where we feel safe talking about things, and that’s what this is.”