Natural Gas Is Here to Stay, Even in New York, New York

Natural Gas Is Here to Stay, Even in New York, New York

The following article from the Manhattan Contrarian shows us natural gas is here to stay, in contrast to the green energy transition myth popular in New York, NY.

As reported in my last post, even the U.S. government’s own Energy Information Administration in the Department of Energy doesn’t believe for a minute that any kind of rapid transition to “net zero” carbon emissions is about to occur in this country. Although President Biden has supposedly committed the entire federal bureaucracy to the “net zero” by 2050 transition, the EIA projects steady and even increasing fossil fuel usage in the U.S. through the entire 28 intervening years.

But surely there must be somebody taking this green energy transition thing seriously. The obvious place to look for such serious commitment would be in New York State, and most particularly New York City. Here, deadly earnest climate campaigners dominate local politics. New York State’s Climate Leadership and Community Protection Act, enacted in 2019 and effective in 2020, commits the State to the energy transition.

And, to prove its own bona fides, the City Council just enacted legislation at the end of 2021 banning new buildings from burning natural gas starting for smaller buildings (up to six stories) in 2024, just two years from now, and then applying to all new buildings by 2027, just five years away. Yup, natural gas is definitely on the fast train to oblivion around here.

All of which led me to be greatly curious when I heard the jackhammers going out on the street starting around 8 AM for the last several days. On closer observation, they seem to be putting in new pipelines of some sort: 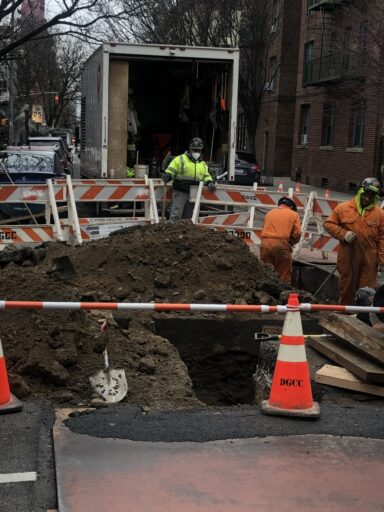 So, I picked out a guy who looked like the job foreman, and asked him what is going on. Sure enough, they are installing new gas mains in the neighborhood. According to the foreman, it’s a new higher-pressure natural gas system, to replace the old low pressure system. He said that the old mains were close to 100 years old.

It’s great to know that we will shortly have a new natural gas distribution system in Greenwich Village, ready for the next hundred years or so. Do you think that they will just shut off the gas one day? I’m willing to bet that that’s not going to happen.

Editor’s note: The above article by Francis Menton, reposted, with permission, from Manhattan Contrarian.