Energiewende Leads to Germany Financing of Russian Attack on Ukraine

These are the fruits of the dirty rotten stinking Energiewende experiment in green energy that has failed miserably and is the now the model for New York’s Climate Act, Pennsylvania’s idiotic drive to implement RGGI and California’s energy debacle:

“The plan is to make our payments in euros to an account in Russia,” a company spokesperson told German media, as cited by Reuters…

When a gas payment is due, the buyer deposits the necessary sum in dollars or euros in its first Gazprombank account. The bank then converts the sum into rubles under Russian central bank exchange rates and deposits it in the second account, from which the actual payment is made.

Uniper said earlier this week it was prepared to begin paying in rubles for Russian gas, soon after Gazprom informed Poland and Bulgaria that it would suspend gas deliveries to them following their refusal to pay for the gas in rubles…

Uniper’s move comes despite calls from the European Commission to EU energy buyers to not pay for Russian gas in rubles.

Green energy is for appeasers, grifters and ideological idiots, not real people who want energy security, freedom and independence. The reality that nations such as Germany have boxed themselves into this situation, where they are actually funding the Russian war on Ukraine is nothing less than repulsive and yet this who the Tom Wolfs, Kathy Hiccups and Gavin Newsoms want us all to imitate.

Who Is Actually Funding It?

The video (less than 8 minutes long) is about Canadian oil, not American natural gas, but it has everything to say who is really funding the opposition to both:

Watch the whole thing. It’s simple and its accurate. You’ll find much the foreign funding the video addresses comes from the United States, but it benefits China and the elitist parishioners of the Church of the Great Reset; that is to say the World Economic Forum, et al.

They are corporatist green grifters all and that is the one thing the video doesn’t adequately address but it explains how things work as to the way money influences politics and is well worth anyone’s time. You’ll notice the Oak Foundation I recently profiled shows up on the screen more than once. You’ll also see why we need to reform this corrupt system of non-profits by taking away the tax-exemptions exploited by these elitist power and wealth seekers.

Is George Soros the Biden Puppeteer? It Appears So!

Speaking of evil foundations and their dreadful influence on our government:

A secretive group backed by millions of dollars from liberal billionaire George Soros is working behind the scenes with President Biden’s administration to shape policy, documents reviewed by Fox News show.

Governing for Impact (GFI), the veiled group, boasts in internal memos of implementing more than 20 of its regulatory agenda items as it works to reverse Trump-era deregulations by zeroing in on education, environmental, health care, housing and labor issues.

Multiple federal officials appear in the internal slide as a part of its “listening tour,” including Sharon Block, Biden’s former top regulation review chief. Block served as administrator of the Office of Information and Regulatory Affairs (OIRA), a division of the Office of Management and Budget (OMB), from the start of Biden’s presidency until February of this year.

“Under Sharon’s leadership, OIRA has played a crucial role in advancing the president’s agenda — from powering our historic economic recovery and combating the pandemic, to tackling the climate crisis and advancing equity,” Shalanda Young, director of the OMB, said before her departure… 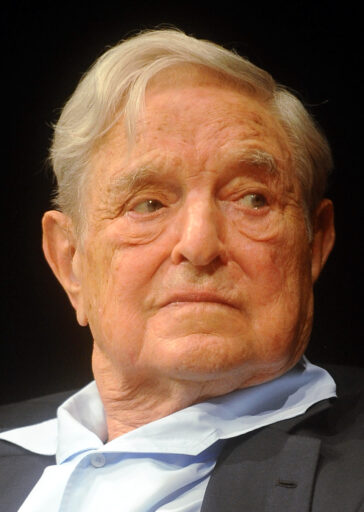 George Soros, the man who destroys nations to profit off currency deals and called out Jews to the Nazis as a teenager.